Dusky dolphins are well known for their energetic and skilful leaping and tumbling activities; they are arguably the most lively dolphins in the world and are master acrobats.

Often several dusky dolphins jump together in the same patch of the ocean but facing in multiple directions, rather like accomplished ballerinas performing a complicated dance.

Other names: Fitzroy's dolphin in Argentina

Dusky dolphins are beautifully marked. Their faces are cone-shaped;  the forehead slopes gently to the tip of the very short, dark-coloured beak. Dusky’s look like they are wearing eyemasks as they have distinctive dark lips, snout tip, and patch around each eye which stand out on the lighter face. Their bodies are also patterned – the back is dark grey to bluish-black, the belly is white, and the sides are grey. The dorsal fin is tall and curved and is two-toned; it has a darker leading edge and a lighter-coloured trailing edge. The flippers are dark, long and curved with pointed tips. The tail flukes have pointy ends and are dark all over.

Action-packed! Experts have named dusky dolphins as the most active of all dolphins.  They are very social, fast-swimming and agile; they are always on the go. Dusky dolphins are enthusiastic, highly skilled acrobatics and regularly perform amazingly high jumps, tumbles and twists, worthy of an Olympic gymnastic competition. They are inquisitive and often approach boats.

Dusky dolphins are very sociable and are typically found in groups up to 20 or more and occasionally 500 to 1000.  Even larger groups of up to 2000 gather to feed off the Kaikoura coast of New Zealand during April and May when prey is plentiful. Dusky dolphins cooperatively feed together on schooling fish and often display spectacular acrobatic behaviour, including chases and high water leaps and aerial displays. These displays are thought to help synchronise their cooperative  movements to herd prey, as the dolphins can see each other easily when up in the air. Dusky dolphins are constantly interacting with one another and coordinated leaping certainly commands high group alertness.

Details about the lives of dusky dolphins have been collected in Peru because thousands have been killed deliberately and their bodies have been studied in detail.

Females are able to start getting pregnant between the age of 4.3 and 6.3 years and each pregnancy lasts 12.9 months.  Babies nurse for about a year and females normally rest for 3 or 4 months before getting pregnant again.

It is not known what the total population size of dusky dolphins is.

What do dusky dolphins eat?

Dusky Dolphins eat a wide variety of fish including schooling fish such as anchovies, mackerel  and sardines and deeper water fish such as hake, lantern fish and a number of squid species.  Their hunting methods seem to be adaptable depending on the prey they are targeting.  In New Zealand, dusky dolphins often rest during the day and move offshore at night to dive in deeper waters to catch fish and squid. During times when there is plenty of prey available in the water closer to shore the dusky dolphins will feed together during the daytime.

Where do dusky dolphins live?

Dusky dolphins live in patches across the southern hemisphere in cool coastal and temperate waters. They appear to prefer continental shelf or continental slope coastal waters, but also live in deeper water where it occurs close to shore. They live off New Zealand, South America, southwestern Africa and around some oceanic island groups. The four subspecies are geographically separated from one another, often by an entire ocean. There is a big variation in body size between these different subspecies - the largest dusky dolphins being found off Peru.

Mating with other dolphins? 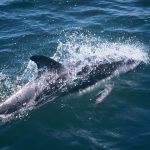 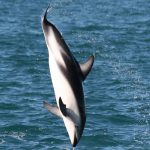 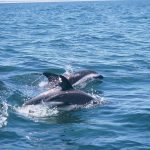 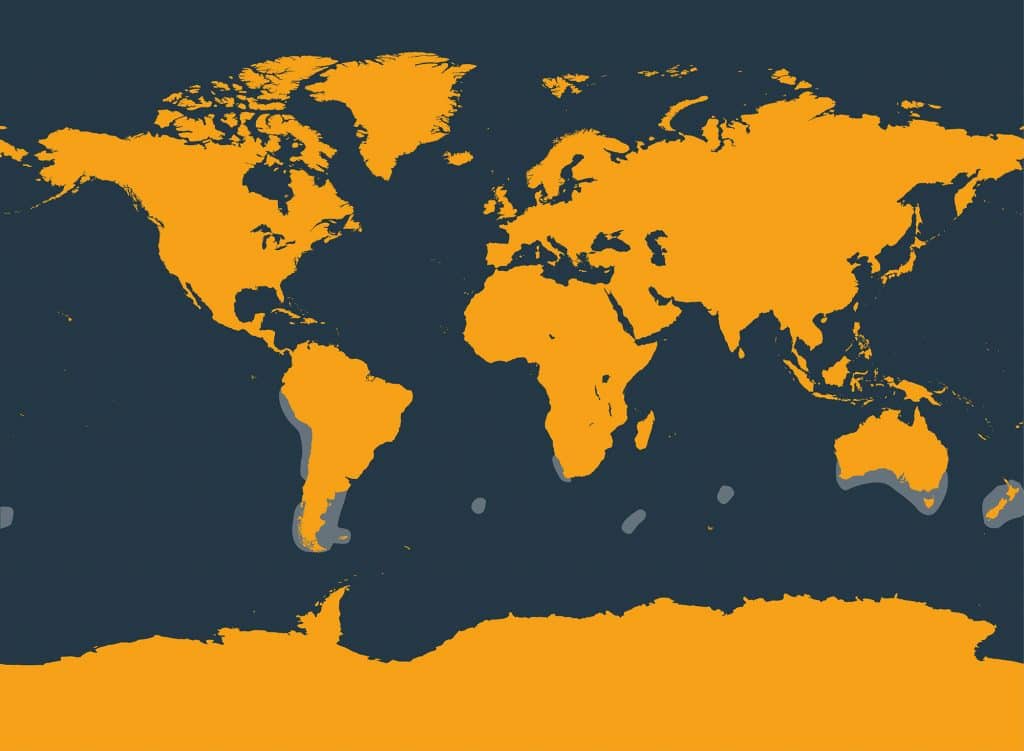 Orcas and some sharks prey on dusky dolphins. Dusky dolphins have been seen swimming closer together and hiding in shallower water when orcas are around.

Dusky dolphins are popular amongst dolphin watchers in Argentina, New Zealand and South Africa.  This is because their lively acrobatic behaviour is very exciting to watch.

Dusky dolphins are often spotted with other dolphin species and feeding amongst seabirds.  This can be a real spectacle to watch when dolphins are feeding on schooling fish from below and leaping from the water, at the same time as seabirds are diving from above.

Fortunately for them, Dusky dolphins are no longer popular with the captivity industry, mainly because the few that have been caught have not adapted well to being confined to tanks, and have failed to reproduce.

Dusky dolphins are also known to hunt for fish cooperatively with other marine mammals such as New Zealand fur seals.

Dusky dolphins were the subject of one of the first ever photo-identification studies, carried out off of Patagonia, Argentina in the 1970s. Recognising individuals is the key to understanding the complicated social behaviour and detailed lives of dolphins.

The threats facing dusky dolphins are most severe in western South America with the IUCN listing this subspecies as Vulnerable.

You can help save dusky dolphins...

By supporting WDC, you can help dusky dolphins to live safe and free. Together, we can: