EU must get tough on Japan

Japan continues to defy international agreements and global opinion. The International Court of Justice ruled Japan's Antarctic hunt illegal, but Japan just gave it a different name and carried on. In 2018, Japan's whalers killed 503 minke whales and 134 endangered sei whales in Antarctica and the North Pacific. Then at the end of 2018, the Japanese government announced its plans to leave the International Whaling Commission (IWC - the body that regulates whaling) to resume commercial whaling in the waters around Japan. , a return to full-scale commercial hunts outside of international regulations is simply unacceptable.

What change do we want to see?

We want the European Union to use its trade relationship with Japan as an opportunity to get tough on Japan's whaling and threaten economic action.

Together we need to: 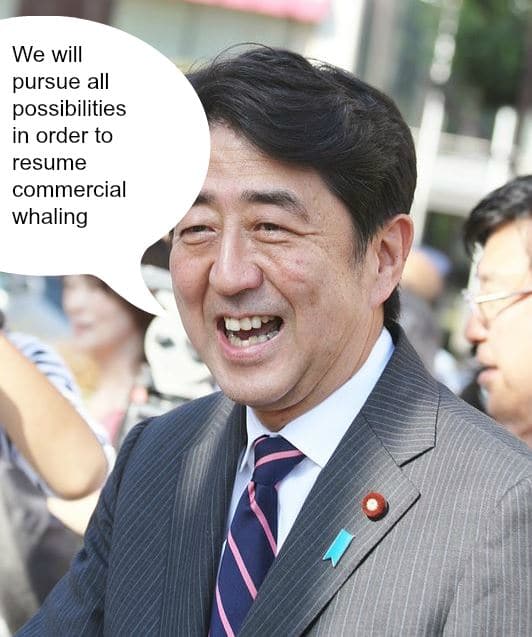 We presented almost 270,000 signatures to the EU and they listened to you.

We presented almost 270,000 signatures to Bernd Lange, the chair of the EU Parliament’s Trade Committee in October 2016. He was sympathetic to our campaign and agreed that the stance of the European Parliament on the issue is clear.

We officially submitted the petition to the EU Parliament’s Committee on Petitions and we were invited to present our campaign in November 2017. Many of the MEPS present agreed that whaling should be raised as an issue in the trade talks.

EU Petitions Committee members sent a personal letter to Cecilia Malmström, the EU Commission’s lead in the trade talks, to express their concern. The Committee chair pointed out that the voice of almost 270,000 people should not be dismissed.

When Japan's Prime Minister, Shinzō Abe, announced that Japan intends to find a way to resume commercial whaling, thousands of you signed our letter  saying that the EU Parliament must get tough on Japan

Our last chance to get the EU to save the whales

7th February 2018
Two years ago, we launched our campaign calling on the EU to make whaling a deal breaker in its trade negotiations with Japan. Our reasoning...

25th January 2018
Following an announcement this week by Japan that it intends upgrading its ageing lead whale hunting ship, Japan’s prime minister has made his intentions clear...

EU and 12 other nations condemn Japanese whale hunting in Antarctic

18th December 2017
The European Union, together with 12 other nations, has issued a formal statement condemning Japan's Antarctic whale hunting programme and rejected the Japanese government’s weak...

28th July 2017
Japan’s new ‘scientific’ whale hunting programme (known as NEWREP-NP) in the North Pacific has been formally criticized, once again, by the European Union (EU) in...

Raising whaling at trade talks: we've achieved a lot together

270,000 people signed our petition and you got the issue taken seriously by EU.

Overwhelming majority of MEPs agreed that whaling should be raised at trade talks with Japan.

EU Petitions Committee sent personal letter to leader of the trade talks saying that our petition should not be ignored.