The fate of captive orcas

Killer whales, more properly known as orcas, have been kept in captivity since 1961, helpless victims of a blatantly commercial experiment which has seen dozens of wild orcas plucked from their families and forced to live in artificial social groupings which bear scant resemblance to their life in the wild.

At least 166 orcas have been taken into captivity from the wild since 1961 (including Pascuala and Morgan).

The growing uneasiness with the concept of keeping orcas in captivity has only been increased by the renowned documentary Blackfish, documenting the reality of the captives' existence. Despite the best attempts of the display industry to blow a smokescreen over such negative publicity, the wider world is now increasingly aware that all is not well in fantasy-land. In recent years, first a trickle, then a steady torrent, of incidents have been reported.

A growing catalogue of 'accidents', illnesses, failed pregnancies and premature deaths that have helped to show up this industry for the cruel circus that it really is.

The story of Corky and Fife

The longest surviving orca in captivity is Corky, captured in 1969 from the Northern Resident population that inhabits the waters around Vancouver Island, Canada. She is held at SeaWorld in San Diego. None of her seven offspring in captivity have survived. Her family (known as the A5 pod) continue to thrive in the wild, including Corky's brother, Fife, who you can adopt to help support our work.

Since 2012, at least 29 orcas have been captured alive in Russian waters. While only three remain in Russia, at least 15 have been exported to China for display in aquariums there. Narnia, Nord and Naja (also known as Malishka or Juliet) are three wild caught orcas from the Sea of Ochotsk displayed at Moskvarium in Moscow.

In 2018, the infamous "whale jail" made headlines around the world. At least 11 orcas had been captured illegally and together with 90 belugas they ended up in a holding facility in Sreadnyaya Bay near Vladivostok. One orca and three belugas later disappeared and it is not clear whether they escaped or died. A group of scientists representing a range of international organisations, including WDC, sent a letter to the Russian authorities. They offered expertise and demanded the safe release of the orcas and belugas. A team consisting of Russian and international experts was given access to the holding facility in March 2019. There were great concerns about the health of the individuals due to the cold weather and the poor quality holding conditions.

The experts came to the conclusion, that with the right kind of rehabilitation and a robust plan, the orcas and belugas could be returned safely to their home waters. An agreement was signed by Governor of Russia's Primorsky Region to begin the process of evaluating them to determine when and how to release them. After further negotiations  the first two orcas were released into the Sea of Okhotsk at the end of June 2019.Three orcas were released in July followed by three more in early August. The remaining two individuals were brought back to their home waters at the end of August 2019. Between June and October, 37 belugas from the whale jail were also returned to the Sea of Okhotsk. By mid November, all belugas were released.

The Far East Russia Orca Project (FEROP), co-founded by WDC research fellow Erich Hoyt, has conducted research on the orca populations in Russia for many years. FEROP, together with other experts and organizations, has recommended to stop issuing official capture quotas due to the lack of information regarding population structures and sizes. 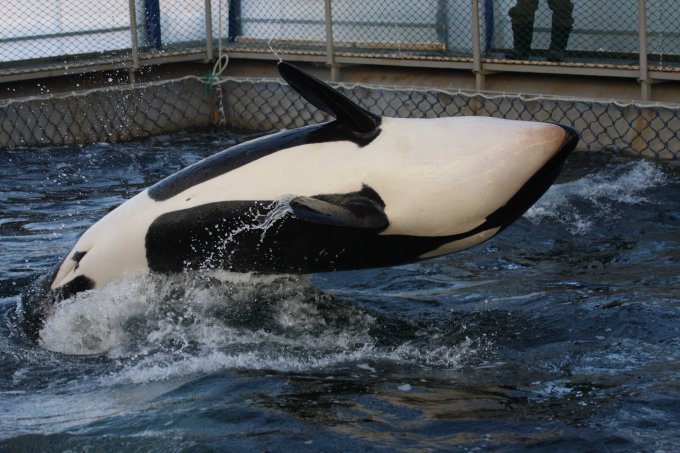 More than 80 orcas were captured in Penn Cove (near Puget Sound in Washington State, USA) in August 1970. Seven were sold to marine parks. At least 5 orcas died, the others were either released or escaped. Partly as a result of these captures, the Southern resident orca population is now critically endangered.

Only one of the orcas from these captures is still alive: Lolita (Tokitae). She has been held at Miami Seaquarium in Florida, USA, since 1970. The fight for her freedom has been ongoing ever since. Lolita’s family is the L25 matriline of the “L” pod of the Southern Resident orca community. Lolita’s  mother is believed to be L25, Ocean Sun (estimated birth year 1930), who still resides with Lolita’s family swimming freely in the open waters where Lolita was captured. Lolita continues to use the calls that only her family use. In 2005, the National Marine Fisheries Service (NMFS) designated the Southern Resident orcas as an endangered species under the US Endangered Species Act. In 2015, Lolita was officially included in the endangered listing of the Southern Resident orca population by NMFS. Lolita is the last surviving orca of 45 members of the Southern Resident community that were captured and delivered for display in marine parks between 1965 and 1973. At least 13 members of her family were killed during these brutal captures. Only Corky, a member of the Northern Resident orca community captured in 1969, who still lives at SeaWorld in San Diego, has been in captivity longer.

The footage is disturbing and depicts the brutal, extremely stressful, and haphazard methods utilized in capturing orcas from the wild. It also features the first ever TV interview with diver John Crowe, who worked on the Penn Cove capture and was in charge of secretly disposing of the carcasses of the dead (or suffocated) orcas, to avoid them being counted in the total numbers taken during the capture.

This video shows original and shocking footage of the captures. Thank you to Baby Wild Films for providing us with permission to share this video.

Captures in Iceland and Japan

Between 1976 and 1989, at least 54 orcas were captured from Icelandic waters and sold to marine parks around the world.  17 of those whales ended up at SeaWorld parks in the USA. The captures in Iceland started after they were prohibited in the US Pacific Northwest in the mid 1970s. The most famous orcas captured in Iceland were Keiko and Tilikum. Keiko, star of the movies „Free Willy“ was released into his home waters in 2002. Tilikum`s story was the focus of the movie „Blackfish“. He died on January 6, 2017 after 34 years in captivity.

In 1997, ten orcas were captured in Taiji, Japan. Five were taken into captivity, the other five were driven back out to sea. By June 1997, two of the captured orcas had alread died. The other three passed away in 2004, 2007 and 2008. Although captured under a permit for „scientific research“, all orcas were on public display at the three Japanese aquaria they were purchased from. 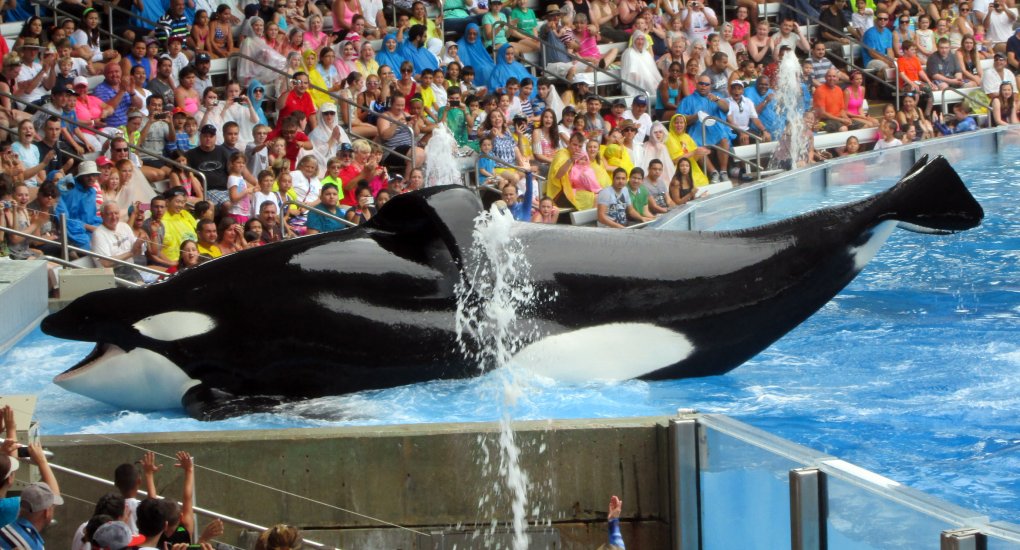 At least 60 orcas (killer whales) are held captive in marine parks around the world. Click on the links below to access pdfs which show the full geneaology of the orcas at each of the parks.

Only one orca, Kiska, is still held in Canada at Marineland in Ontario.

SeaWorld holds more orcas than any other marine park. Tilikum, whose story was told in the movie BLACKFISH, was held at SeaWorld Orlando, Florida. The Miami Seaquarium holds a solitary orca taken from the wild, Tokitae (Lolita).

Mundo Marino in Buenos Aires, Argentina has just one solitary orca, Kshamenk. He is used in breeding programmes with other parks overseas.

There are currently two Japanese facilities, Kamogawa and Nagoya, keeping a total of seven orcas, one of them was wild-caught.

Chimelong Ocean Kingdom holds nine orcas, Shanghai Haichang Polar Ocean World another four and two more individuals are at Wuxi Changqaio Ocean Kingdom. They were all caught in Russian waters between 2013 and 2016.

The current list of orcas in captivity, when they were captured or born, and where they are currently held.