In times of crisis it‘s important to have opportunities to take our minds off things. The Olympic Games provide just that for many of us around the globe - our climate crisis, species extinction and Covid-stricken planet Earth.

It is truly wonderful and commendable that the Japanese government is determined to make the Tokyo 2020 Olympics and Paralympics the ‘Green Games’ as explained by  the President of the Japanese Olympic Committee, Tsunekazu Takeda.

However there is a big, ugly and completely ‘un-green’ stain on this plan: commercial whaling, sanctioned and supported by the Japanese government - the same government that wants to become known for hosting a climate-friendly Olympics. 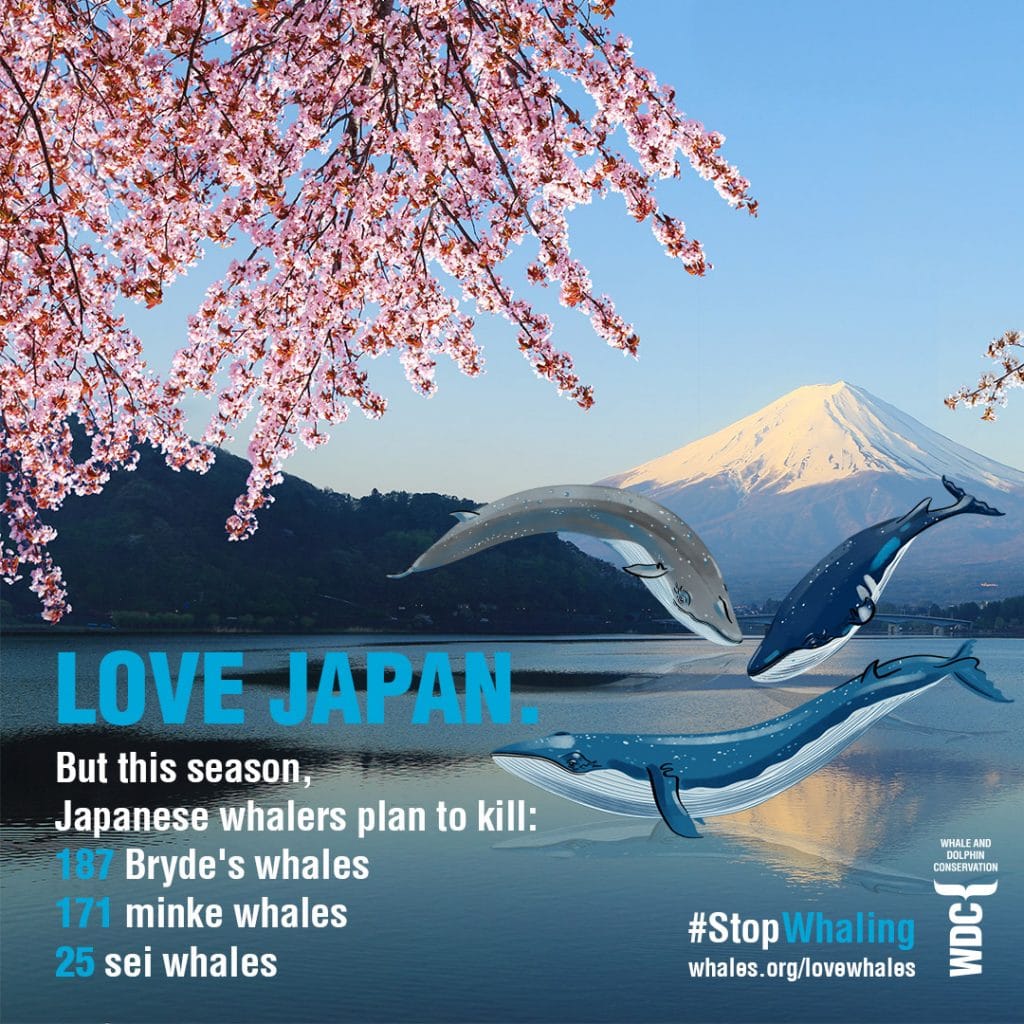 If you are able to make a donation, it will help us fight to stop whaling.

Of course whaling is inherently cruel and the slaughter of whales and dolphins for financial gain is antiquated and despicable. For many decades, there hasn’t been any dietary or other need for people in Japan to eat whale meat. Actually, commercial whaling, brought to Japan by the US to help supply people with protein after the horrors of World War II, isn’t on the minds of many Japanese people these days at all. There is very little interest in eating whale meat and the industry is propped up by a small political lobby that doesn’t want to let go of the idea that there’s money to be made from killing the world’s largest creatures with exploding harpoon guns. 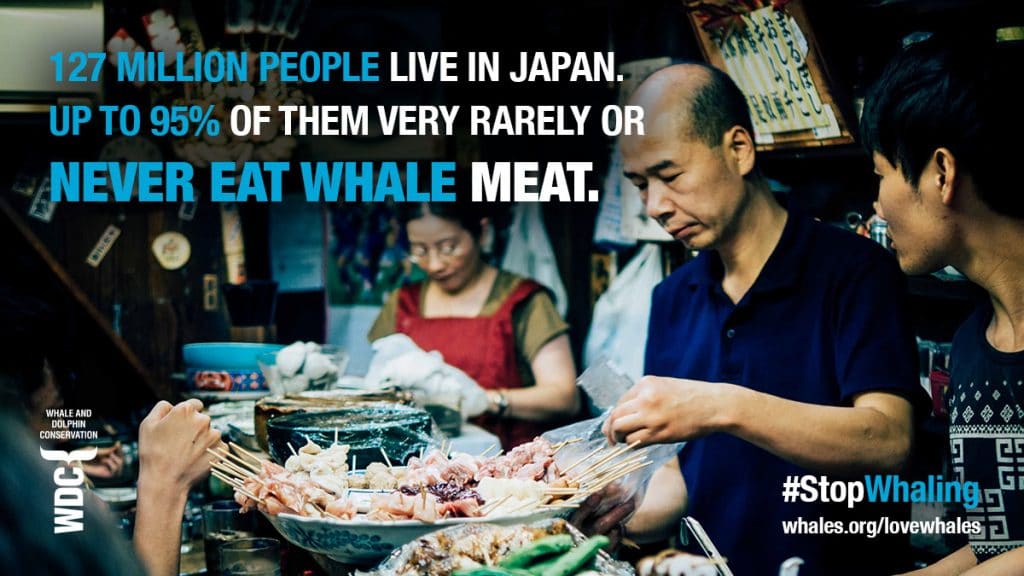 But slaughtering whales doesn’t just cause incredible suffering to these highly social and self-conscious individuals, it also causes our planet to suffer - and ultimately we suffer too.

Whales are our allies in fighting climate change, and in our efforts to keep more species from disappearing off the face of the Earth.  Whales and dolphins play a key role in capturing and storing carbon dioxide, the greenhouse gas that is the main contributor to our climate crisis. They also help to keep fish populations and other ocean life thriving and growing.

Whales play an amazing role in an ecosystem that keeps every creature on Earth alive, including us.

We humans have done enormous damage to the planet, including killing millions of whales – more than 3 million in the 20th century alone - and wiping out up to 90% of some populations, like the mighty blue whale.  Thanks to science and research, more and more governments and decision makers are becoming aware and acknowledging that recovering whale populations can help fight the damage we cause.

Whales re-distribute nutrients across the seas. These are essential to the marine ecosystem and the production of microscopic plants called phytoplankton, which produce over half of the world’s oxygen. This is known as the ‘whale pump’. Whale poo and wee are brilliant fertilisers for phytoplankton.

Phytoplankton absorb carbon from the atmosphere – millions of tonnes of it.

Globally, phytoplankton absorb up to 35% of all the carbon dioxide we produce. Whales also store tonnes of carbon in their bodies and even in death, whales sustain life.  When whales die they sink to the seabed, where they become mini ecosystems sustaining all manner of marine life, taking huge amounts of carbon with them. Researchers estimate that because of whaling, large whales now store approximately 9 million tonnes less carbon than before large-scale whaling. 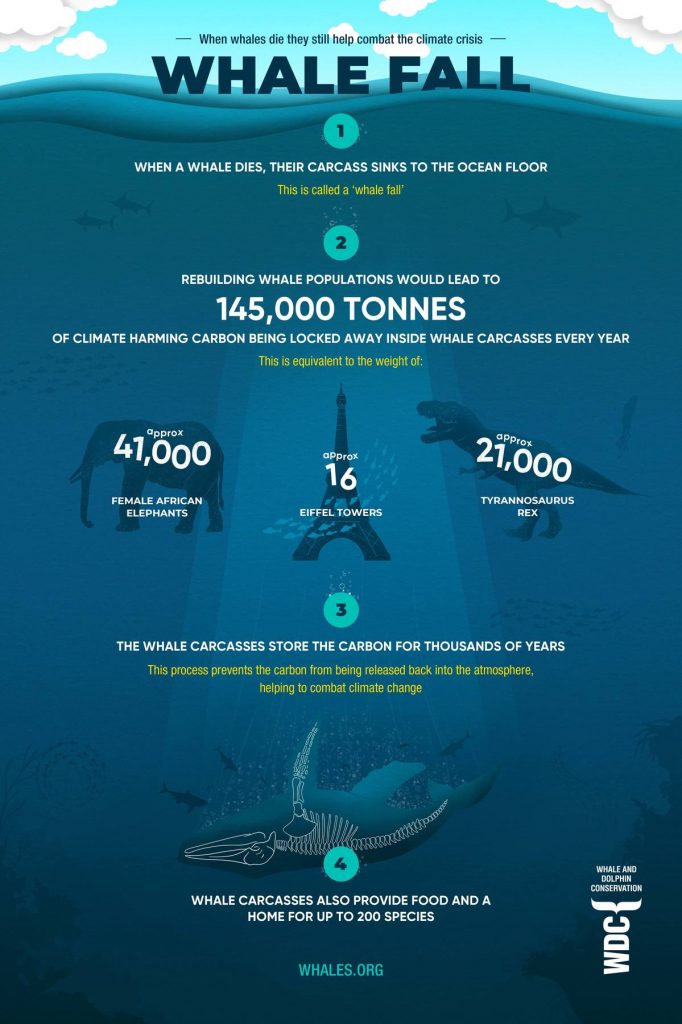 Climate change and species extinction are the greatest threats to all life on Earth.

These days, we experience the devastation of climate change first hand. We call on the Japanese government, for all our sakes, to stop killing whales and dolphins - not just because they are awesome individuals who have the right to live peacefully and free from harm, but also because they are our partners and allies in turning the tide and saving our shared blue home. They can help ensure a safe future for all children on this planet – human and non-human alike.

In the words of the wonderful Heathcote Williams: ‘From space, the planet is blue. From space the planet is the territory not of humans but of the whale.’