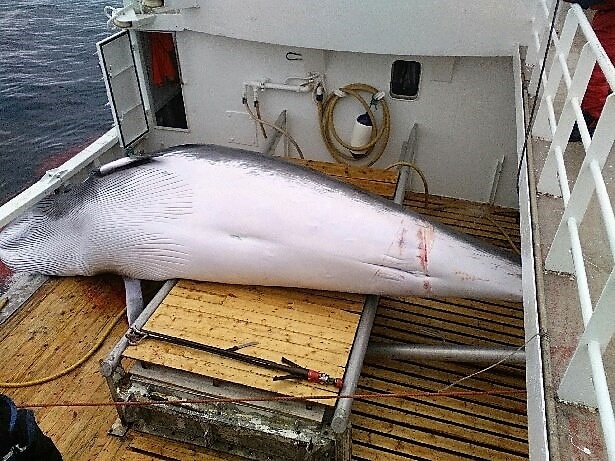 With the season set to continue until October the whalers have killed almost as many as their final total for the entire 2019 season, which saw 429 whales slaughtered.

With Norway’s self-allocated quota (number of whales that can be killed) set at 1,278, and seventeen boats licensed to hunt this year, the grim tally so far looks set to rapidly increase.

It’s no secret that whaling is inhumane. A 2018 report submitted to the International Whaling Commission (IWC, the body that regulates whaling) by Norwegian authorities revealed that almost a fifth of the whales shot by grenade-tipped harpoons suffer for up to 25 minutes before dying. These statistics are only likely to worsen, given the Norwegian government’s recent decision to relax the regulations.

Vanessa continued: ‘Most people are unaware that over two-thirds of the whales killed are females and many of them are pregnant, so this is a tragedy from a conservation as well as a moral perspective.

‘Whales are our allies in the fight against climate change. They store large amounts of carbon in their bodies over decades, which consequently can‘t form into climate-damaging carbon dioxide. They also contribute to a healthy marine ecosystem. If we protect whales, we protect ourselves.'

Demand for whale meat is falling in Norway, as a study commissioned by WDC and other NGOs revealed. Only 4% of Norwegians surveyed said that they ate whale meat ‘often’. As a result, the government in Norway heavily subsidies the industry to keep it afloat.