As football fans settle down to enjoy a beer, a barbeque and the opening games of the Euros, my thoughts are centred on a remote fjord off the Lofoten Islands, northern Norway. And whilst the fans want sunshine, I’m praying for bad weather.

Why? Because Vestfjord in the Lofotens is the scene of animal testing - to be precise, stressful and potentially dangerous experiments on young minke whales, ironically dubbed ‘rats of the sea’ by Norwegian fishers.

Your donation will help us fight these cruel experiments.

What is the project and who is funding it?

Beginning in mid-May and running till the end of this month, this joint US/Norwegian venture is fronted by Dorian Houser of the US-based National Marine Mammal Foundation and Petter Kvadsheim, chief scientist at the Norwegian Defence Research Establishment. The researchers claim that they just want to find out more about the hearing capacity of baleen whales and they’ve selected minkes - and young minkes at that - as the smallest and therefore easiest to handle of the baleen whales.

However, this is no innocent research project, this one involves the big guns: quite literally. The US federal government has reportedly contributed $3.7 million and a glance at the list of funders, which includes the US Navy and Norwegian defence agency, as well as the oil and gas industry - noise producers one and all - speaks volumes about their true agenda. They want a better understanding of just how much noise they can pump into our ocean - in the course of deploying naval sonar or using seismic airguns to test for oil and gas - before baleen whales are harmed, so that they can carry out these lucrative activities with minimum disruption.

What do the researchers plan to do?

The Norwegian government has granted the researchers permission to capture up to 12 young minke whales over the next four years as they migrate through the region on their way north to feeding grounds in the Barents Sea. The whales will find their route blocked by huge nets, some 1,300m long, strung across the strait at Vestfjord.  If a whale swims into the netted area, the exit will be sealed and the trapped whale will be herded into a smaller enclosure before being forced into a modified salmon cage, clamped between two rafts, with researchers both in the water and on the rafts.

Once cornered in the cage, electrodes will be implanted beneath the whale’s skin. In tests lasting up to six hours, the researchers plan to measure the whale’s brain waves to determine how they might react to ocean noise. If the poor whale becomes stressed and panics, there is provision to sedate - a highly risky procedure very rarely carried out on baleen whales. After that, the whale will be satellite tagged and released, in an ordeal that could last as long as four days.

The team admit that this sort of experiment has never been done before and it’s ‘high risk’ for both whales and researchers, acknowledging that the whales being tested will likely experience ‘moderate distress and discomfort’. They’ve tried to downplay the tests, stating that ‘we use electrophysiological methods developed for use on newborn children’ - but since when have we implanted electrodes beneath the skin of our babies to test their hearing?

We’ve been active from the start - joining forces with the US-based Animal Welfare Institute and NOAH, the largest animal welfare organisation in Norway, to file a formal complaint and ask questions of the Norwegian government. WDC then approached dozens of senior whale scientists and veterinarians around the world asking them to sign an open letter to Norwegian Prime Minister, Erna Solberg, opposing these experiments on scientific as well as welfare grounds. Fifty four leading scientists and vets signed on in a matter of days demonstrating the strength of opposition in the scientific community.

We've supported concerned Norwegian citizen Vicky Moens to launch a petition which has already been signed by more than 68,000 people and we’ve made sure that these experiments don’t just fly under the radar unnoticed as those responsible probably hoped they would. We’ve shone a global spotlight on what’s going on via numerous media interviews and articles such as this one on CNN and this piece by the BBC’s David Shukman as well as on social media.

Thankfully no whales have been caught, not yet at least, but the permit runs until late June and the whales are migrating through the area as I write, so the risks remain high. And there is every chance that they will try to run this experiment again next year unless we can stop them. I hate to think of these beautiful, intelligent little whales being deliberately waylaid as they migrate and subjected to these cruel experiments. 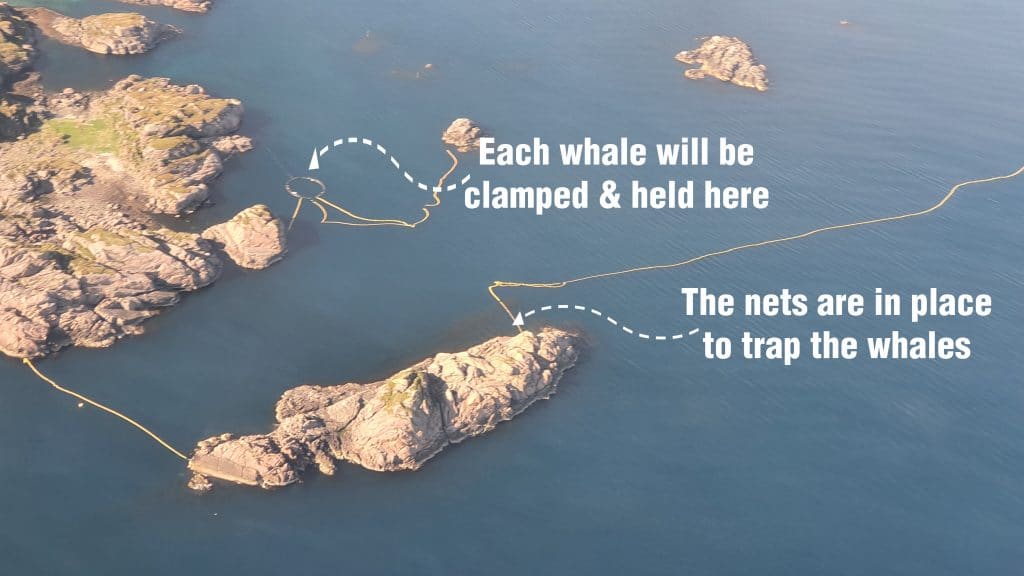 The stress could kill them

Shocking to think that the combined stress of capture, confinement, restraint and having electrodes inserted under their skin could trigger a condition known as ‘capture myopathy’ which can be fatal. Previous captures have demonstrated the high risks involved, for example, experiments upon white-beaked dolphins in Iceland resulted in a female needing to be released early after she became dangerously stressed.

If the US is leading on this, why not work in their own waters?

The simple answer is because they most likely would not be allowed. Researchers often operate in regions where animal welfare standards are more lax, allowing them to conduct research which likely would not have been permitted in their home waters - a process known as ‘offshoring’. Earlier this year, our colleagues at the US organisation Animal Welfare Institute wrote to US government officials expressing concern that Norway was chosen as the location for this research in a deliberate attempt to circumvent the US Marine Mammal Protection Act and other environmental laws.

Will these tests yield any useful data?

There’s so much wrong with this and I’m struggling to find anything right. This entire experiment is fraught with risk for the whales and, in these unnatural conditions, is highly unlikely to yield data that will change policy relating to the noise we pour into our oceans. The fact is we already know from numerous behavioural studies over many years how whales react to artificial noise in the ocean: they react badly. So badly, in fact, that deep-diving species fleeing from the noise source can get the bends, the same potentially life-threatening decompression sickness that strikes scuba divers who surface too quickly. Far better to minimise naval and other noisy activities and, where possible, to site them outside key marine mammal habitat.

Being cynical, and given the funders involved, it is far more likely that they want to find out just how much noise whales can tolerate - and at which frequencies - before they are actively harmed and inconveniently impede costly naval or oil and gas activities.

The welfare risks for these intelligent, sensitive individual whales are just too great. Shame on you Prime Minister, Erna Solberg – stop these cruel experiments now.

Every single voice counts so ask everyone you know to sign too.