Three Indo-Pacific dolphins who were successfully released back into the wild after being illegally captured off the coast of South Korea over a decade ago, have rejoined their pod and had babies.

Around 120  Indo-Pacific bottlenose dolphins live around Jeju Island in the Korea Strait off South Korea. Between 2009 to 2010, 11 individuals were illegally captured and sold to a local entertainment park. Dolphins are highly intelligent and are severely impacted by a life in captivity. Sadly, bottlenose dolphins also have higher death rates in captivity and only five of the captured dolphins survived.

However, the public started to take notice and a public campaign raised funds for their release. In March 2013, the South Korean supreme court ruled in favour of the captive dolphins’ release. Both the president and director of the park were sentenced to eight months in prison and a fine of around $10,000. 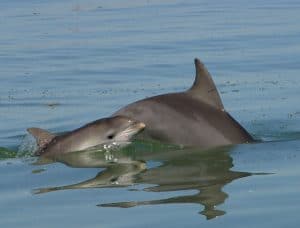 In 2012, the mayor of Seoul and the Korean Welfare Association started to release three of the five illegally captured dolphins: Chunsam, Sampal and Jedol (who was held captive at the Seoul Grand Zoo). The remaining two dolphins, Bookson and a male named Taesan, first had to recover from illnesses and then slowly readapted to the sea in a sea pen. They were finally set free in 2015 and reunited with their family pods.

The three female bottlenose dolphins, Sampal, Chunsam and Boksoon had babies in their natural habitat from 2016 - 2018. This is a real success story for dolphins in captivity who could be rehabilitated and released. Today there are around 3,600 whales, dolphins and porpoises held captive in aquariums, zoos and marine parks around the world. If we want to end captivity, we need more sanctuaries where they can live the rest of their lives in a more natural environment or be rehabilitated for a successful release back into the wild.

Help us to end whale and dolphin captivity.