It’s the paradise dream - a bright blue sea against a backdrop of palm trees, four or five dolphins jumping in unison out of the water. With scenes like this, maybe it’s no wonder the Caribbean and wider Latin American region has one of the greatest concentrations of dolphin captivity in the world and, in particular, swimming with dolphins programmes.

We have investigated the history and extent of the captive dolphin industry in this area and examined what laws and regulations exist to address the impact it has on dolphin conservation and welfare, and we’ve uncovered some horror stories of dolphin suffering. 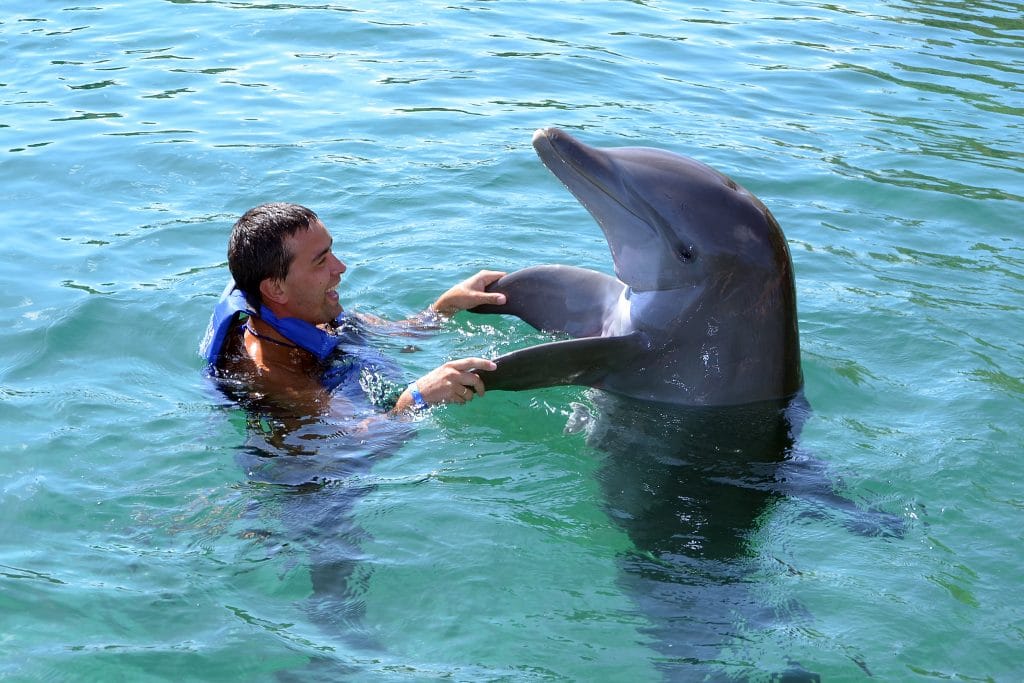 Your donation will help us end dolphin exploitation.

Captive dolphins are held in attractions offering ‘swim with the dolphins’ experiences, zoos, dolphinaria and even hotel complexes in 17 countries in this region, with the highest number in Mexico (31 attractions), Cuba (10 attractions), Dominican Republic (5), the Bahamas (4) and Jamaica (4). There are also captive dolphins in Anguilla, Argentina, Bermuda, the Cayman Islands, Colombia, Curacao,  Honduras, Peru, St Kitts, St Thomas, Tortola and Venezuela.

Ninety-four percent of attractions offer visitors the opportunity to interact with dolphins in a swimming with dolphins experience or similar programme. Many also display dolphins in shows. Ten facilities offer dolphin assisted therapy (this is the controversial and unsubstantiated practice of encouraging human interaction with dolphins to aid mental and physical health). 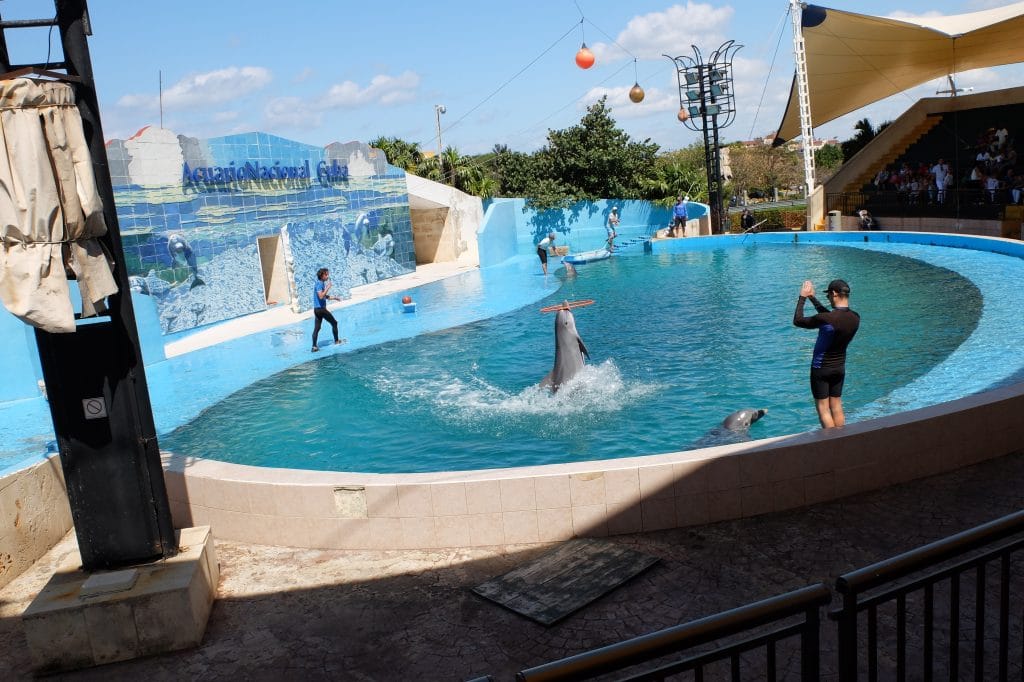 Bottlenose dolphins perform in a show at the National Aquarium, Cuba

Captivity has a long history in the area. In 1960, Cuba’s National Aquarium began operations, presenting captive dolphins to school children. Attractions in Colombia, Mexico and Venezuela were also established in the 1960s and 70s, but it was in the 1990s and 2000s that the industry really took off with the growing popularity of swimming with dolphins alongside the growth in cruise tourism.  Sea pens were constructed all over the region and now the majority of the attractions hold dolphins in these coastal enclosures.

Sea pens may enable dolphins to be outside in potentially more natural conditions, but these facilities present their own set of problems. They are often close to pollution sources from nearby holiday resorts and the water can be too shallow and hot for the dolphins, who often have no shade from the sun. There is also an environmental impact, as sea pen construction and the concentration of dolphin faeces can severely damage sensitive ecosystems such as coral reefs.

An attraction in Antigua was forced to close when local homes and businesses were flooded after the operator blocked drainage from a nearby lagoon that threatened the dolphins with contaminated water and sewage.

Many of these coastal attractions are located in hurricane zones and dolphins have been washed out to sea during severe storms. In 2020, hurricanes Genevieve and Delta forced facilities in Mexico to relocate dolphins from sea pens to wholly inadequate holding conditions until the hurricane risk passed. Other dolphins have died as a result of attractions being hit by hurricanes.

The vast majority of dolphins held in captivity in Latin America and the Caribbean are common or Indo-Pacific bottlenose dolphins. In addition, an orca named Kshamenk is held, alone, in Argentina and an Amazon River dolphin, called Huayrurín, in Peru. Huayrurín is now the only captive Amazon River dolphin in the world. 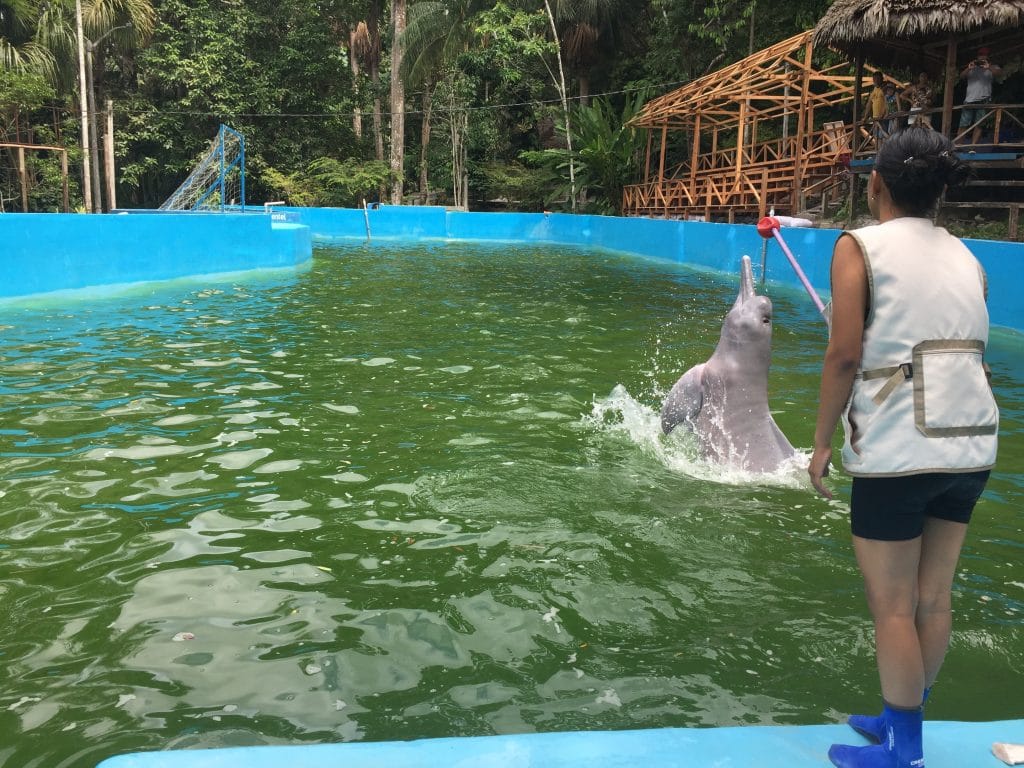 Huayrurín, the world’s only captive Amazon River dolphin, at the Quistococha Zoo in Peru

However, the situation is not all bad. Chile and Costa Rica are countries in the region at the forefront of dolphin protection. They prohibit both the capture of dolphins from the wild, as well as the keeping of dolphins in captivity. Argentina, Brazil, the Dominican Republic, Mexico and Uruguay all prohibit captures. At the other end of the scale, Cuba actively allows wild captures. Many individuals in captivity in the region were captured in Cuban waters. Others have come from much further afield, including the Solomon Islands in the South Pacific. Of 28 individuals imported into Mexico in 2003, six died in the two years following arrival. The Solomon Islands subsequently banned dolphin captures in its waters.

Many countries have adopted regional and international agreements prohibiting captures (such as the United Nations Environment Programme’s Specially Protected Areas and Wildlife Protocol in the Caribbean and the Convention on the Conservation of Migratory Species of Wild Animals) but the majority lack the necessary national legislation to ban captures, trade or captivity. 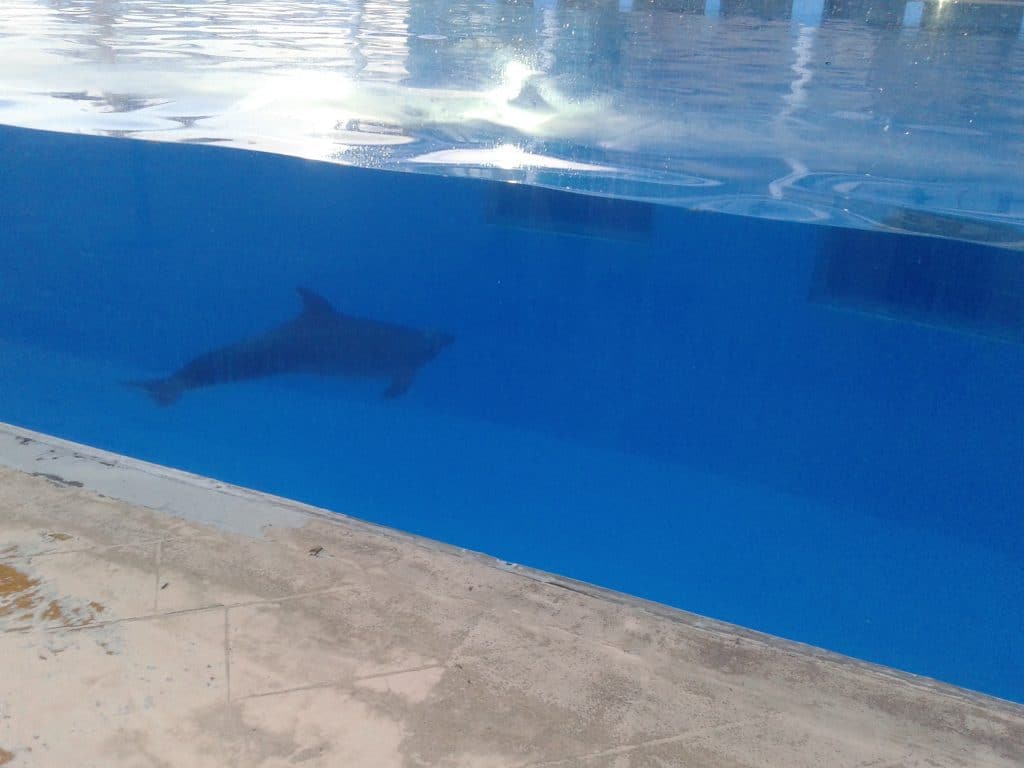 A captive bottlenose dolphin in Mexico

We’ve published our findings in a new Spanish language report which calls on countries in the region to adopt and enforce legislation that protects dolphin welfare and conservation and prohibits the capture and keeping of dolphins in captivity. We’re also urging the international tourism industry, including cruise operators such as Carnival, to end their promotion of attractions holding captive dolphins.

As we rebuild post-pandemic do we really want dolphin exploitation on our holiday itinerary? Let’s build a better, more cruelty-free future for travel and enjoy dolphins in the wild, on their terms.

Your gift will help us work with tour operators to build a future where dolphins are no longer exploited as holiday entertainment.