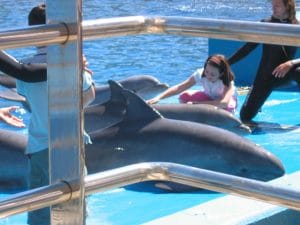 Plans announced by Dolfinarium Harderwijk, Netherlands that it will end its dolphin shows have turned out to be bad news for the dolphins concerned, as the facility has revealed that it intends on moving eight of the bottlenose dolphins it keeps to China.

Harderwijk will also move the walrus and sea lions it holds, and worryingly it hasn't ruled out breeding dolphins in the future, and therefore the potential for more dolphins returning to the facility.

Whilst a growing number of countries are turning their backs on the cruelty of whale and dolphin captivity, the number of captivity facilities in China continues to grow.

Kidnapped, imprisoned and forced to perform, for dolphins that are meant to swim many miles every day, a tank is a featureless prison cell. In confinement, whales and dolphins may swim endlessly in circles, can lie on the floor of the tank for many hours, chew on the sides of the pool and repeat the same patterns of behaviour over and over.

More than 3,000 whales, dolphins and porpoises are held in tanks. If we want to end captivity, we need sanctuaries where they can live the rest of their lives in a more natural environment or be rehabilitated for release.

Together with the SEA LIFE Trust we have helped create the world's first beluga whale sanctuary in Iceland.