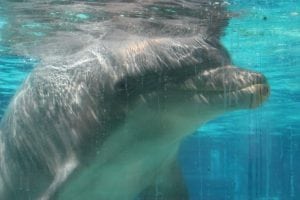 Parc Asterix in Plailly, France has announced that it will be closing the dolphinarium on its site.

Reports state that the eight dolphins kept in tanks there will be placed in other captivity parks but no other details have emerged.

The park, which was due to reopen on April 3, also houses sea lions. It’s managing director, Nicolas Kremer has said that the dolphinarium was at odds with the main business (amusement) and had been considering closing the dolphinarium for some time.

Last September, Barbara Pompili, France’s minister of ecological transition, announced a gradual ban would be introduced in the country on the use of wild animals in traveling circuses, keeping dolphins and whales in captivity in marine parks, and raising minks on fur farms.

The keeping of whales and dolphins in tanks for captivity shows is cruel and ocean sanctuaries are one alternative. As well as helping to establish the world’s first beluga whale sanctuary in Iceland with The SEA LIFE Trust , WDC is also working in partnership with other sanctuary projects. It is hoped these initiatives will help to encourage the rehabilitation of more captive whales and dolphins into natural environments around the world, and one day help to bring an end to whale and dolphin entertainment shows.