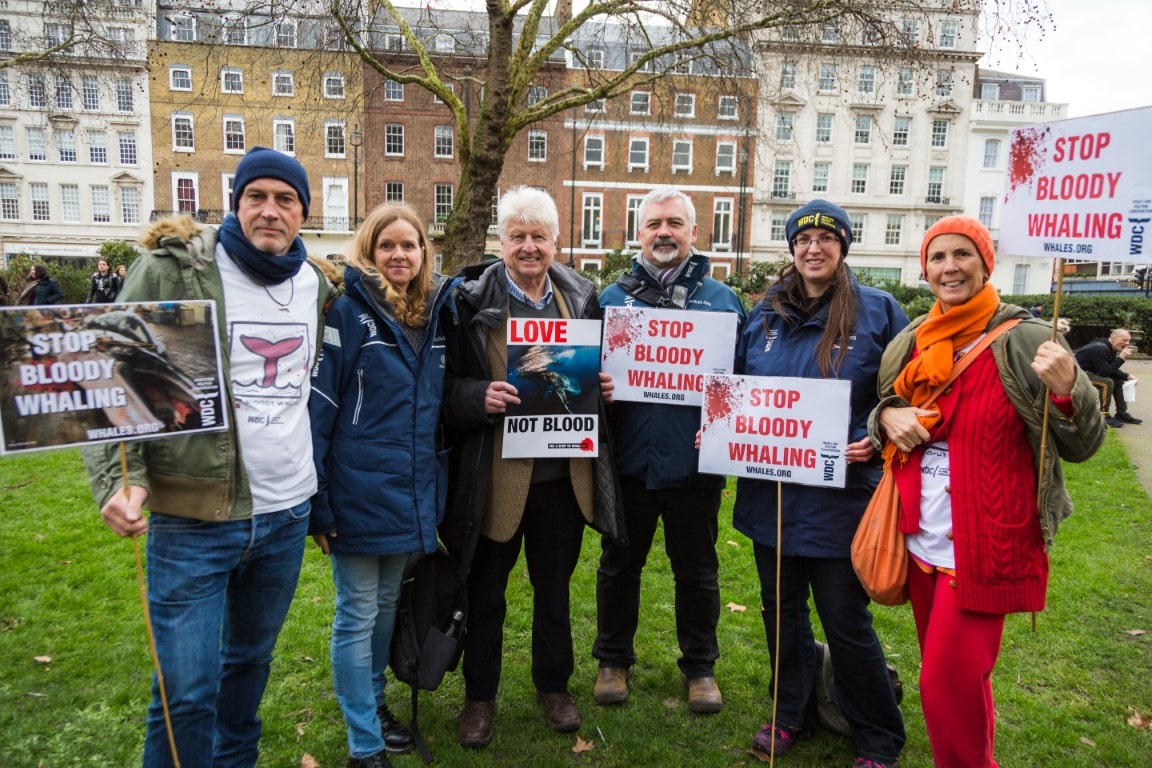 Prime Minister Boris Johnson has stated a desire to take action on ‘cruel’ whale hunting in Japan in an exclusive interview with The Telegraph newspaper.

Johnson questioned Japan’s hunts and said he would ‘take a stand’ against them after news emerged last week of the horrific killing of a minke whale entangled in nets near the Japanese coastal town of Taiji – made infamous by the brutal drive hunts that take place there every year. The whale was eventually drowned by local fishermen, chopped up and sold at a local meat market.

The Prime Minister’s fiancee, Carrie Symonds, and his father, Stanley Johnson, have both been seen at anti-whaling marches, including in 2019 with WDC (pictured).

In the article, the Prime Minister said: ‘At a time when we are already seeing the tragic and irreversible destruction of our natural world, with the sea increasingly pumped full of plastics and climate change threatening entire ecosystems, it is more important than ever to take a stand against the cruel practice of whaling.

‘I look to Japan, a world leader on climate change and free trade, to stand with me in the fight against the killing of these beautiful mammals and take steps to help preserve our precious marine life for future generations. Let us not imagine a world where our children and grandchildren do not know the song of the humpback whale. We must all come together to respect and protect one of mother nature's greatest treasures.’

Mr Johnson suggested he would be raising the issue when world leaders meet for an environment summit at COP26 in Glasgow later this year.  He also questioned Japan's actions on nature and biodiversity in the newspaper article.

Lord Goldmsith, the international marine minister, said: ‘The UK is a world leader on marine protection, including protection for iconic marine wildlife such as whales – which is why we have condemned commercial whaling and urge nations around the world to join us in protecting these majestic creatures.’

Please donate to help us end this cruel practice

Tweets by @whalesorg
Posted in News and tagged Japan whaling