By Julia Pix | 30th March 2021
When a dolphin or porpoise is caught or entangled in fishing gear it's known as...
Load More

Despite the extinction emergency, the climate crisis and the pandemic, Norway’s government and its whaling industry are encouraging more whale hunting and promoting the consumption of whale meat. Whales are our allies in fighting climate change – when we kill them, we’re helping to destroy our planet.

Now, more than ever, we need to look behind the curtain and expose the untruths that this cruel and devastating industry is built upon. 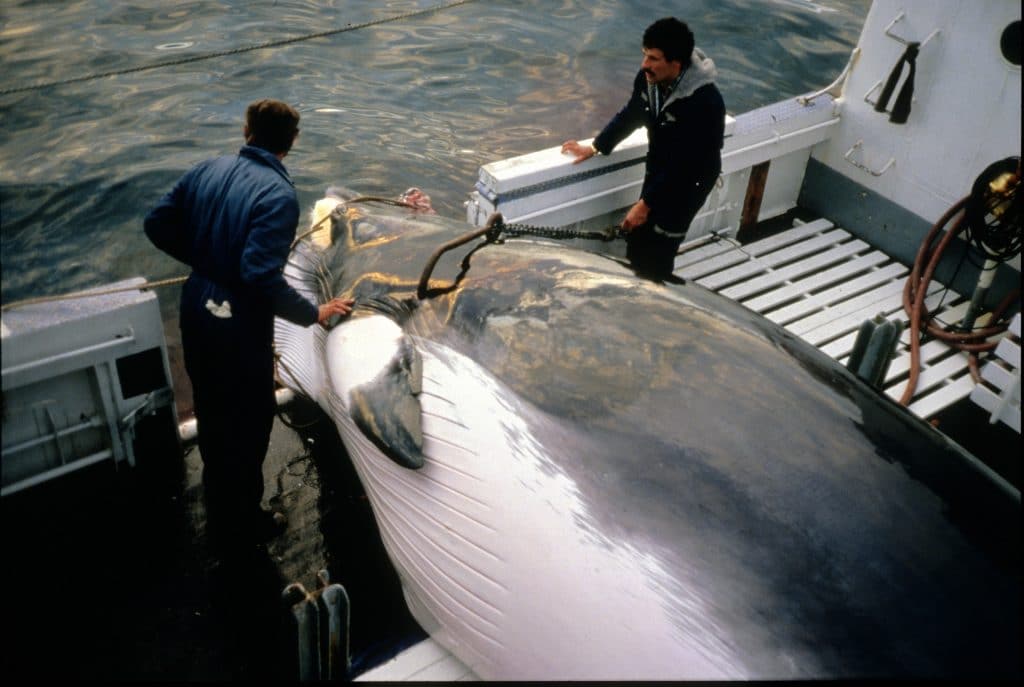 Can you make a donation to help us continue our efforts to stop the whale slaughter?

2020 should have gone down in history as a milestone year for biodiversity. Representatives of the global community had planned to use top-level meetings, such as the Biodiversity Convention and the UN Climate Convention, to agree how we are going to stop the greatest threats of our time - species extinction and climate change.

Instead, the reality of the consequences of our exploitation of wildlife hit us with full force as Covid 19, the ‘coronavirus crisis’. People realised that we have to change our relationship with our fellow species and that the killing and consumption of wild animals in particular is a dangerous global problem.

Against this background came the news from the Norwegian whaling industry that demand for whale meat in Norway has risen this year. So far 503 minke whales have been killed, that's 74 more whales than in 2019. 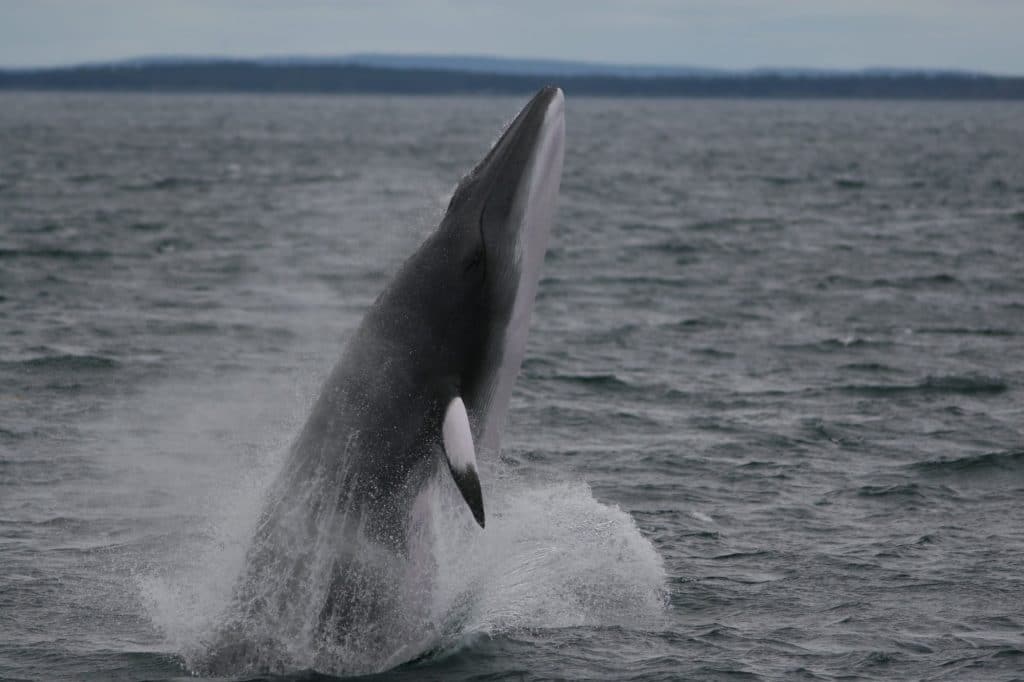 Shop owners and whalers cite the coronavirus crisis as the main reason for the increasing interest, claiming that since Norwegians couldn’t travel, many holidayed in northern Norway and were interested in trying ‘local delicacies’. The marketing strategies for promoting whale meat, which the Norwegian government has supported financially for many years, finally bore fruit and the government also relaxed its licensing rules making it easier for new hunters to start whaling. Whale slaughter looks like a viable way to get rich.

What those promoting eating whale meat as a ‘Norwegian delicacy’ do not mention is the gigantic house of lies on which this proposition is built. Let’s take these myths one by one:

Scientists have expressed concern for many years and questioned the sustainability of Norwegian whaling. Norway uses its own method of calculating numbers, which allows for more kills than many scientists at the International Whaling Commission (IWC, the body that regulates whale hunts) say would be sustainable. Additionally, many of the whales killed are pregnant females, and, setting the cruelty of this aside, this seriously threatens their population's reproductive capabilities and genetic diversity.

Whalers present the consumption of whale meat as an environmentally friendly alternative to the large amount of climate-damaging methane that is produced, for example, in beef production.  However, this argument fails to recognise the scientific consensus that whales are an essential part of the ocean ecosystem. They play a crucial role in removing carbon, which keeps carbon dioxide out of the atmosphere. Whale poo stimulates the growth of plant plankton which absorb carbon dioxide and produce oxygen. If you think of forests as one of the lungs of the planet, then these plankton are the other lung, producing half of the oxygen you breathe. They are also an important source of food for small marine animals and fish, so whales help maintain healthy fish populations. Nothing about whaling is environmentally friendly – it’s the exact opposite. Killing whales directly contributes to the climate crisis. 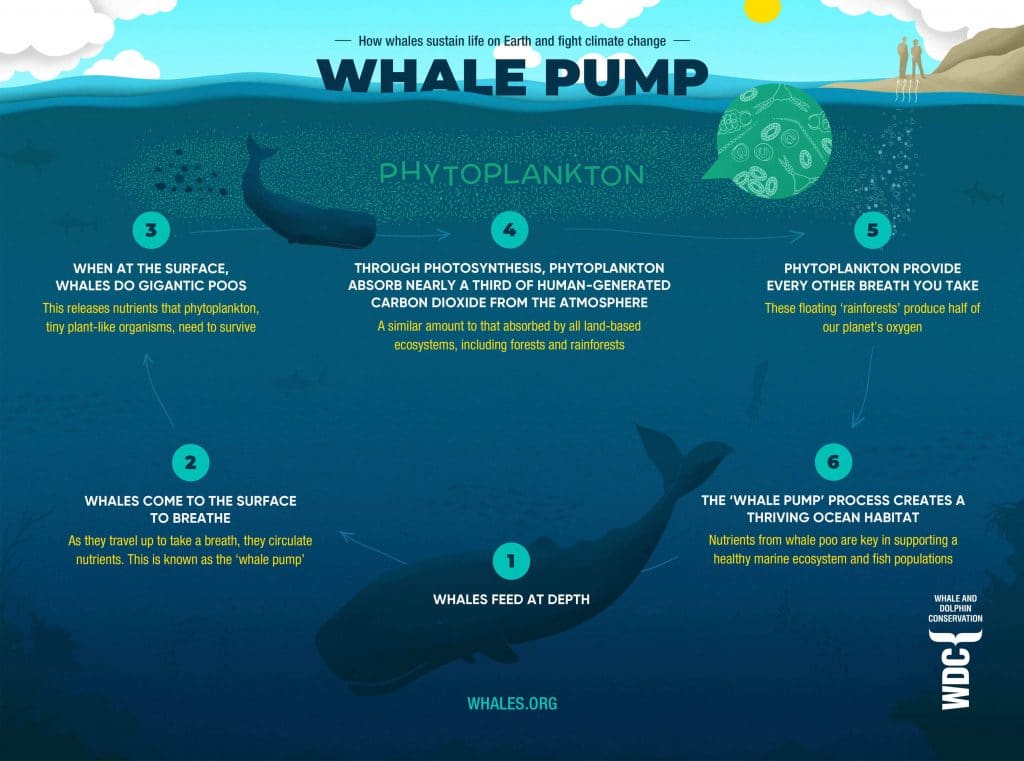 Killing whales is the exact opposite of 'environmentally friendly'

Minke whales are a migratory species and spend only part of their lives in their feeding grounds in Norwegian waters. They are not ‘local’.

Pro-whalers will tell you that whaling is no crueller than killing cows or pigs, or shooting wild animals such as deer for food. Whatever your stance on eating animals, don’t believe a word of it. Norwegian research shows that many whales suffer slow, agonising deaths, often suffering for more than six minutes and even up to 25 minutes after they are harpooned. Taking this long to die (not to mention the exploded metal inside their body) would not be tolerated for land animals in a slaughterhouse where there are strict regulations. In fact Norway was one of the first European countries to require that animals are stunned before slaughter, but this protection is not given to whales.

Although most minke whale populations are not classified as endangered, there are still large gaps in research into their migrations and lives. Whale researchers have expressed major concerns about the decline in minke whale numbers in certain areas around Norway. Like all marine mammals, minke whales face the cumulative impact of many human activities, such as chemical and noise pollution, ship collisions, climate change and getting caught in fishing gear. Whaling is one threat that can be stopped immediately.

Norwegian whalers hunt in defiance of the IWC's whaling ban and the industry sets its own kill-quotas using a method that is not supported by IWC members and which has been rejected by many countries and scientists. Bit by bit, the Norwegian government has also cut the bureaucratic burden of whaling regulations and lowered requirements so that more ships can hunt whales with minimal supervision.

It is difficult to assess whether the supposedly increased demand from Norwegians for whale meat is true or just another part of the marketing hype. The fact is that whale meat has hardly played a role in Norwegian cuisine. Indeed, a study commissioned last year by WDC and partner organisations found that only 4% of the Norwegians surveyed said they often eat whale meat. Two thirds said that they had never tried it before or tried it a very long time ago. 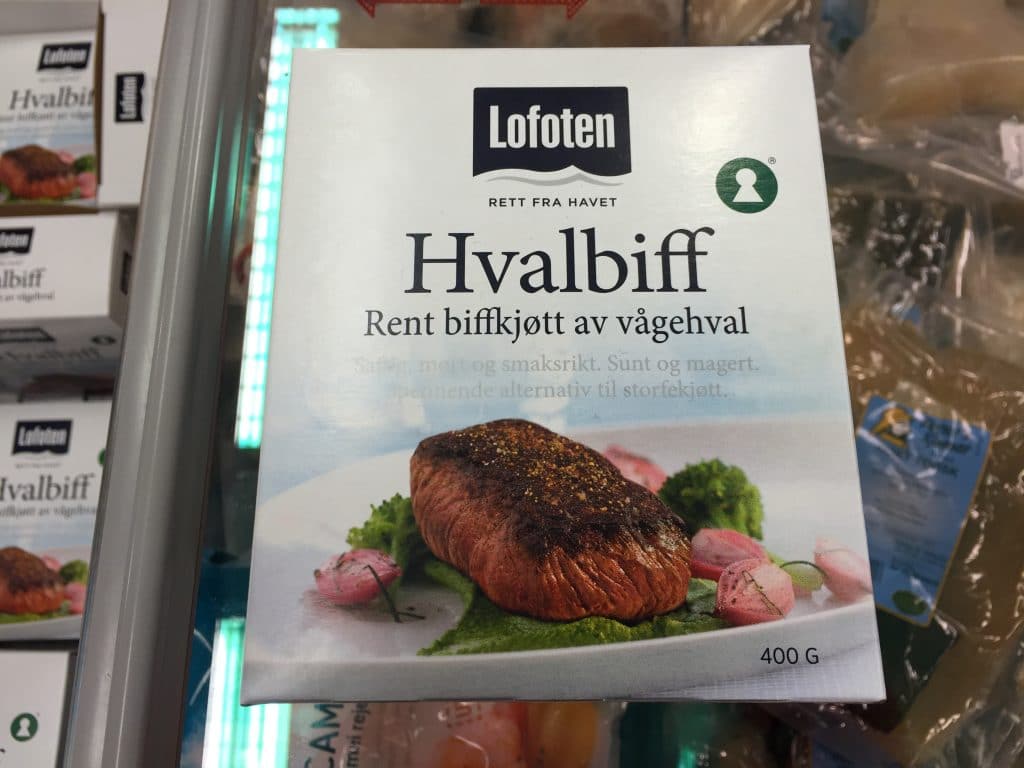 Whale steak for sale in a Norwegian supermarket

Sadly, 2020 did not become the milestone year for biodiversity. Instead, we find ourselves at a key moment for the planet - the prospect of short-term financial gains must give way to the common goal of stopping species extinction and the climate crisis. Almost three million whales died at the hands of whalers in the 20th century and the effects of this huge slaughter are only now being explored.

The recovery of the global whale populations should be one of the most important goals of species and climate recovery. It is shameful and incomprehensible that one of the richest countries on Earth is instead promoting the exploitation of the ocean and supporting whaling as if there was no climate crisis and no extinction emergency.

Be assured - your donation will help, whether it's small or large.

Tweets by @whalesorg
Posted in Blogs & Articles and tagged Norway