As winter set in, ice began to cover the enclosures and a worldwide effort surfaced to raise awareness of the terrible fate of the individuals held and to try to help them.

Celebrities including Pamela Anderson and Leonardo DiCaprio joined scientists from all over the world, including from WDC, in calling on President Putin to save the whales.

In April 2019, oceanographer Jean-Michel Cousteau and Whale Sanctuary Project’s Charles Vinick travelled to Russia and signed an agreement for the whales to return to the wild.

By November, the whale jail was empty. Eleven orcas and 87 belugas (some individuals were reported to  have ‘disappeared’ in the meantime but probably died) were released following an intervention from President Putin.

What’s been learnt and does this mark a turning point in Russia’s attitudes to captivity? Let’s explore … 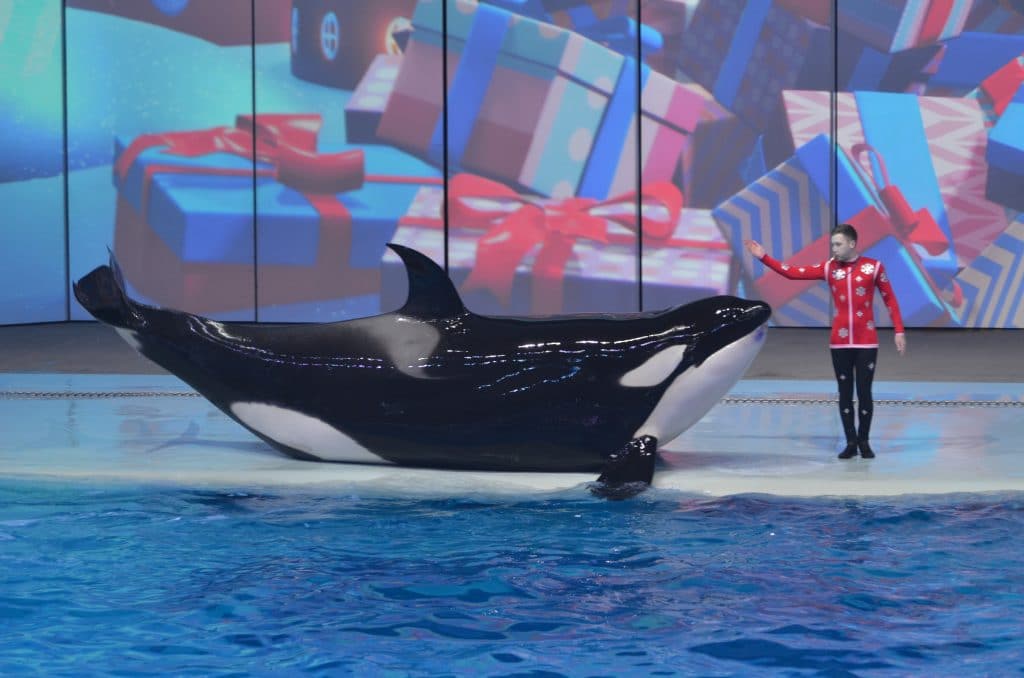 Your donation will help us work with people in Russia to end captivity there.

Determined there would never be a repeat of the whale jail, by January 2020, an unprecedented 100,000 petition signers in Russia had raised their objections to captivity and asked the Russian government to stop captures of orcas, beluga whales and dolphins for sale to captive facilities. In April 2020, we reported that the government had approved the inclusion of mammal-eating orcas into the Russian Red Book of Endangered Species – this is a state document listing endangered species and it is illegal to capture any species that is included in the Red Book. 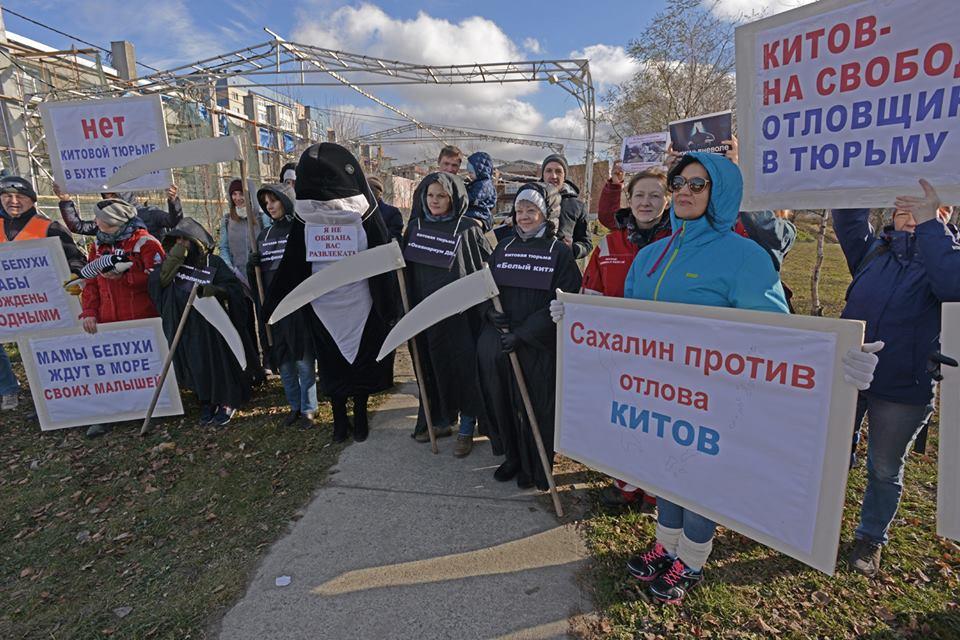 The collection of more than 100,000 signatures on a petition addressing the Russian government requires a response. That came in May from a so-called ‘expert’ working group who rejected the concerns of Russian citizens and argued that the exploitation of whales and dolphins should continue. We have yet to see what this means in practice.

On 22nd July, Проект (in English: The Project), an ‘independent Russian media outlet specialising in in-depth journalism’, published a detailed review, peppered with gruesome images, of what journalist Svetlana Osipova called ‘the most inhumane business in Russia’.

Black Sea bottlenose dolphins were the first to be captured in Russian waters for exploitation by the international captivity industry. Initially, dolphins who had been used by the military for a number of purposes including searching for unexploded mines and 'enemy' divers and 'guarding' military ports before the break-up of the Soviet Union, were sold off to dolphin facilities in a number of different countries to perform to paying crowds. To meet demand, others were captured and sold abroad. The fate of the majority was a short life in horrible conditions, like the two dolphins described in Osipova's article who ended up in a silo pit filled with water in a cowshed.

Black Sea bottlenose dolphins are now protected under CITES, the Convention on International Trade in Endangered Species and it is illegal to export individuals captured from the wild for commercial purposes. There is some evidence of continuing trade, but it has largely ground to a halt, despite continued demand for dolphins for shows and swimming with dolphins attractions in some parts of the world. The situation is vastly different for other species found in Russian waters though, including in the Russian Far East, where beluga and orca captures have continued, including for the infamous whale jail. 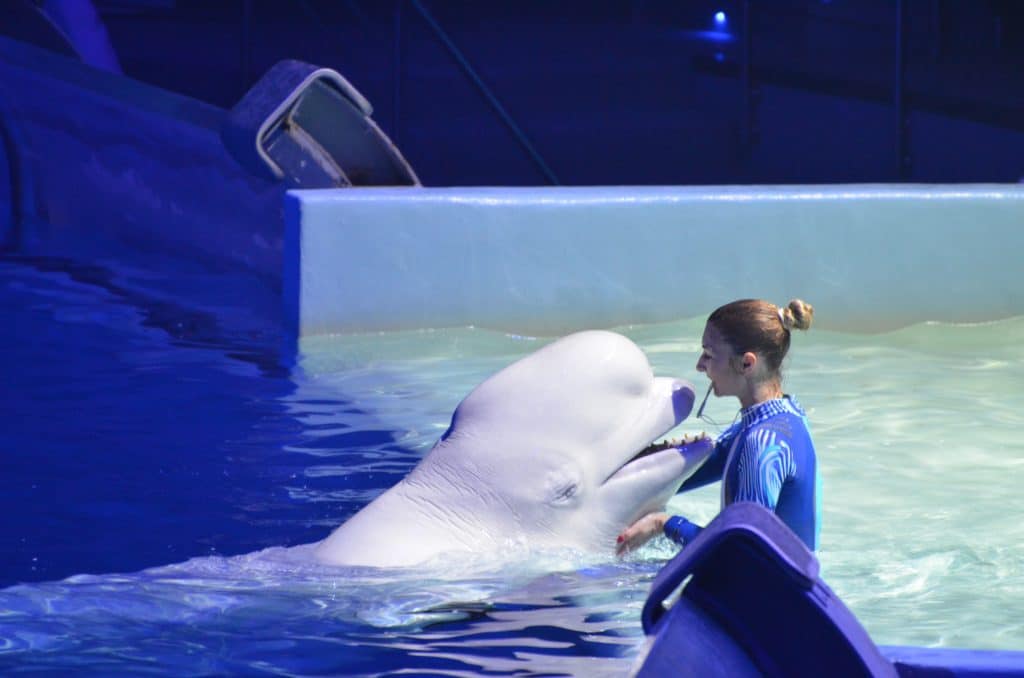 Ponchik, a huge beluga held in a small pool in Russia. He died in 2019 © Oxana Fedorova

It is still possible to capture whales and dolphins and other marine mammals for cultural, educational and scientific purposes and captive facilities or 'dolphinaria' are recognised as institutions which meet these criteria in Russia. Osipova reports that between 2012 and 2018, Russia was the world's largest supplier of marine mammals overseas. Over the last seven years, Russian customs has recorded the export of 637 whales, dolphins, seals, sea lions, walruses and other marine mammals, with an overall ‘value’ of more than $29 million. China is the largest importer of marine mammals captured in Russian waters.

Under Russian law, quotas are set for the capture of marine mammals from several different species and these should be based on recent scientific knowledge about the populations targeted. In most cases, though, such data is not available and quotas are issued anyway, with captures likely to be unsustainable. Captured individuals often die during capture or immediately or soon afterwards. According to Tatiana Denisenko, a veterinarian and specialist in marine mammals, only about 10% of captured individuals survive. Transportation alone, in crude containers that become quickly polluted, causes skin disease, hypothermia, dehydration and injuries.

Following the national and international outcry about the whale jail, in 2020, no quotas were set. In 2019, whale and dolphin exports were halted and the Russian Deputy Prime Minister Alexei Gordeyev claimed his government intended to clamp down on the capture of whales. We very much hope this will play out in practice and no further captures will occur. 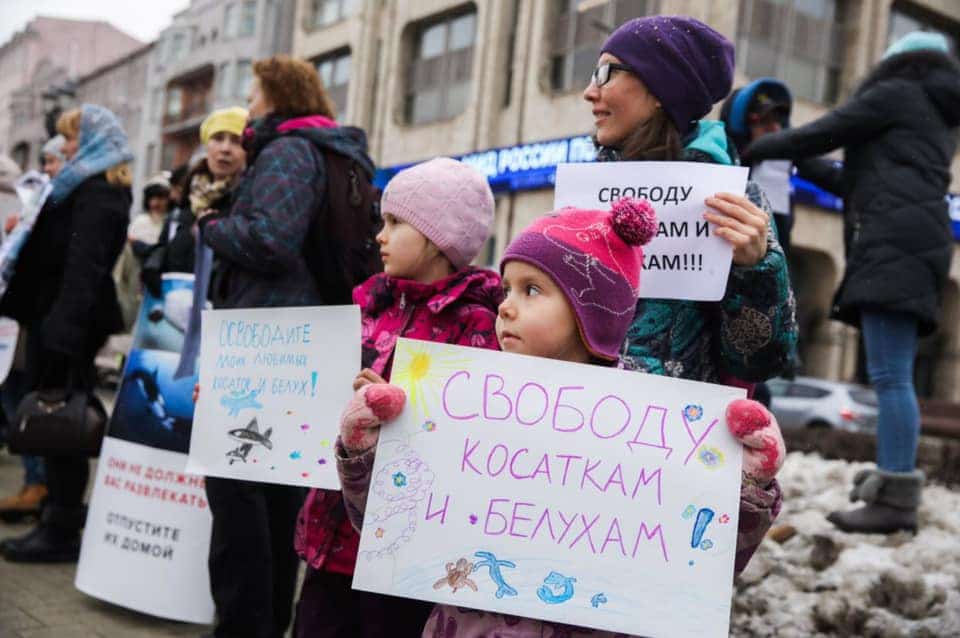 A new generation of protesters in Russia © FreeRussianWhales.org

For the captives, though, the impoverished life continues. Russia ranks fifth in the world for the number of dolphinaria. Thirty eight permanent facilities are reportedly in operation as well as some additional travelling shows or circuses. Many of these facilities are likely to be struggling now as a result of closures due to the coronavirus pandemic. Marine mammals are expensive to keep, even in poor conditions and release projects are complicated and expensive.

In 2000, the International Whaling Commission (IWC, the body that regulates whale hunts) recognised five separate populations of belugas in Far East Russia. New research by beluga specialist Olga Shpak and others presents clear evidence for seven, meaning extra scrutiny should be given in the consideration of any quota setting because the sustainability of each population needs to be considered separately. Of course, we firmly maintain that whales and dolphins should not be captured even if numbers are sustainable, but all these arguments help build a case.

WDC is supporting whale researchers in Far East Russia as well as organisations opposing captures and captivity across Russia and internationally.  But there is a great deal to do if we are to achieve an end to cruel whale and dolphin captivity in Russia. We’re under no illusions. It will be a tough uphill battle and we’ll need your support to win it.

Please make a donation to help end captivity in Russia

We need your support to end these cruel captures. Every single gift will help.