Dr Maddie Brasier is a marine biologist at the University of Tasmania and member of the Wildcare Tasmania Whale Rescue Volunteer First Response Team having been trained in whale rescue by Parks and Wildlife Tasmania. She’s also a WDC supporter and has been selling her beautiful knitted whale hats on etsy to raise money for our work. 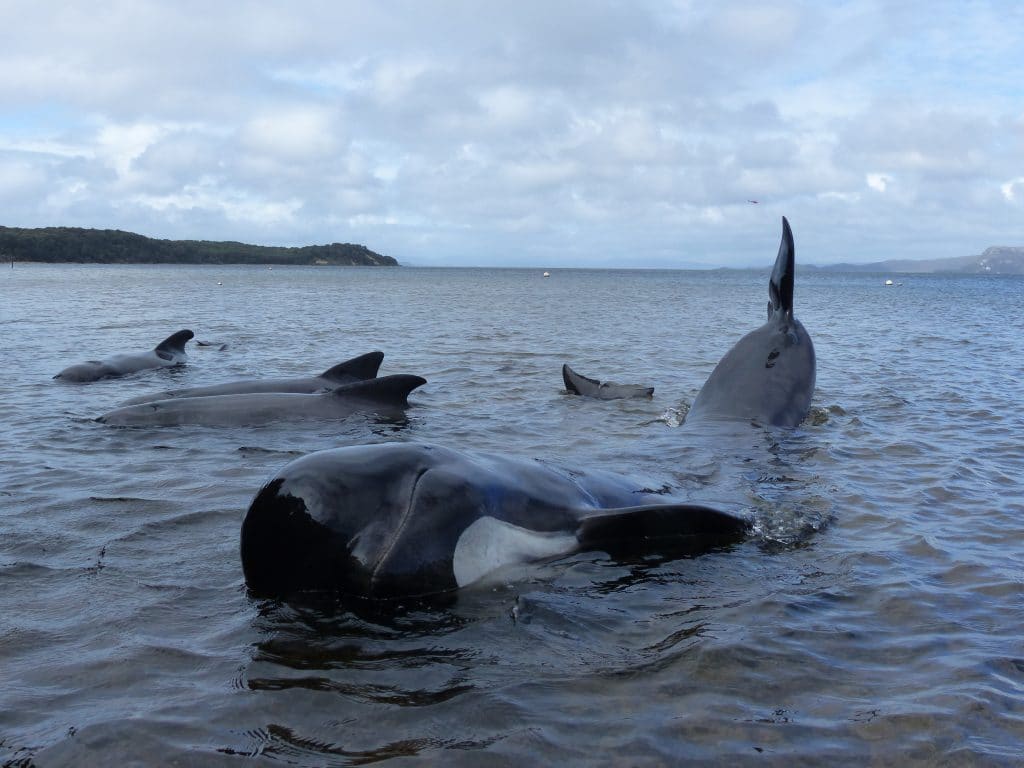 If you are able to make a donation, it would mean the world.

At some point during the night on Sunday 20th September, hundreds of long-finned pilot whales stranded on the west coast of Tasmania. The reason remains somewhat of a mystery but this area of Tasmania is a known hotspot for mass strandings. Potential reasons include mis-navigation or misadventure. These are curious whales who use echolocation for navigation, but this is less effective in shallow sloping areas with a sandy seafloor, like Macquarie Harbour. Because of their strong social bonds, it is also likely that a few individuals unintentionally led their pod into disaster.

I got the call to ‘get ready’ on Monday morning, I said ‘yes’ almost instantly because I knew I had to try and help these whales. The location was over five hours from my home in Hobart and by the time I got to the west coast it was dark and the Marine Conservation Program (Tasmanian Government) and the Parks and Wildlife service were setting up base in a nearby town that would become the headquarters for the rescue mission.

By 7.30am Tuesday morning I was knee deep in water in Macquarie Harbour surrounded by over 200 stranded and distressed whales. There was no time to waste, each whale needed to be assessed and the viable ones moved out of the harbour for release for them to stand a chance of survival. Experts within the Marine Conservation Program allocated small teams to selected whales and the whales were placed on whale mats and tied up to jet boats to be taken outside of the harbour and released offshore. This part of the rescue was critical, releasing individuals who are not ‘viable’ or releasing them in the wrong place could risk individuals re-stranding or worse, another mass stranding. 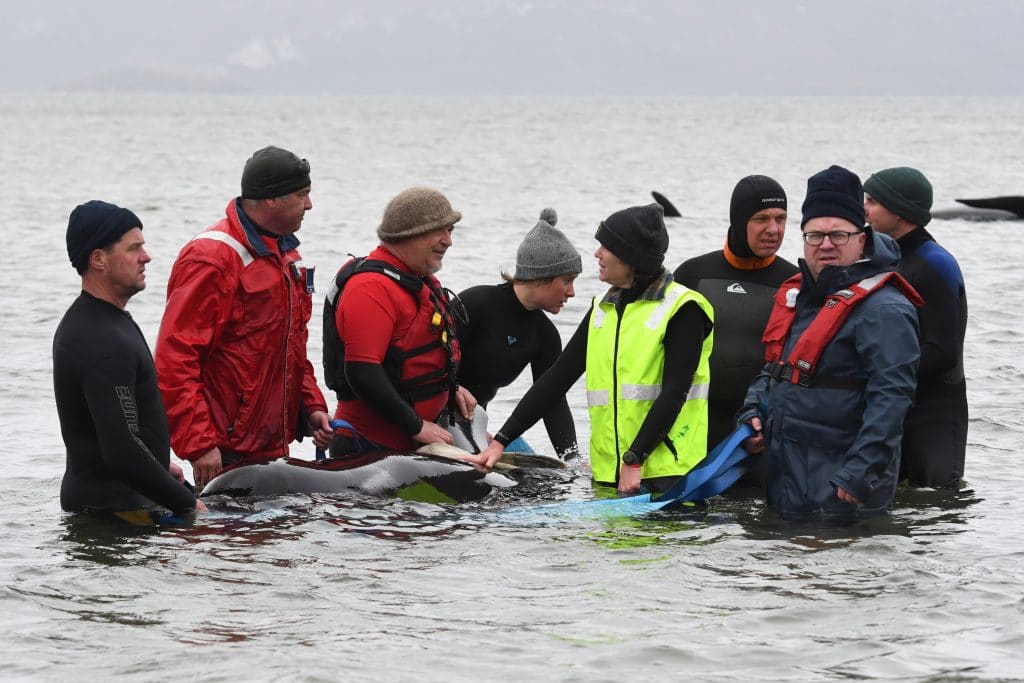 We couldn't waste a second. That's me in the grey hat © Brodie Weeding, The Advocate

The west coast of Tasmania is wet and wild, we battled all sorts of weathers on the first two days of the rescue mission as we got to grips with our rescue technique. My team worked in the harbour for four solid days, the work was both physically and emotionally demanding. Some of these whales were seven metres long, weighing over 2,000 kgs and needing to be transported across the sandbar to deeper water to be tied onto the boats. Seeing so many individuals in such a desperate state was at times truly heartbreaking, the bonds between these whales are incredibly strong in ways us humans may never truly understand. I heard mothers calling to calves even if their calf was dead, whilst others were so distressed it was dangerous for us to try to move them as they thrashed their powerful tails. We tried where possible to release obvious pairings together, some of the calves could swim in the shallow water so we could get the mother on a mat and tied to the boat as her calf followed us.

Two days into our rescue mission another 200 whales were spotted by helicopter crew almost 10 km deeper into the harbour in an extremely remote spot. It is thought that these whales stranded at the same time as those on the sandbar and unfortunately, most of them were already dead. For our rescue team it was devastating to know that there was nothing we could do for most of them.  We had to focus our thoughts and efforts on the whales we could help and as well as the harbour teams, additional teams worked on the beaches outside of the harbour releasing a small number of whales there. In total 110 individuals were herded out to a pod offshore and I was told by boat operators that most whales took about five minutes to right themselves and then all headed straight out to sea. Hearing this news almost brought tears to my eyes as we continued our work in the harbour. 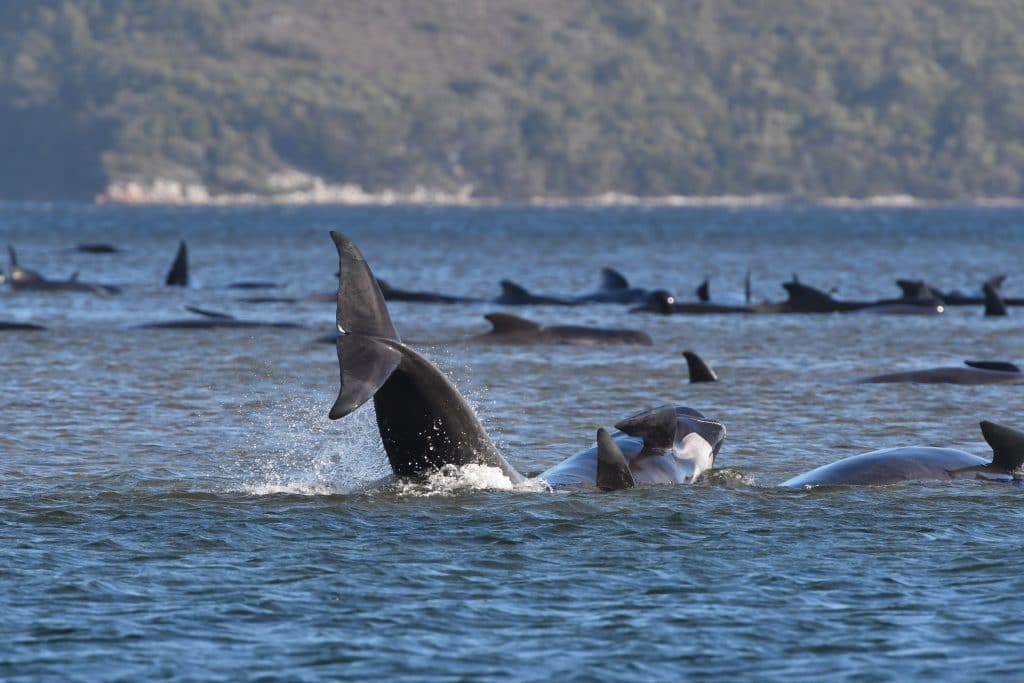 We gave 110 whales a  second chance at life and the success of this mission was down to each and every person and organisation that provided their time and resources. Without the incident management team, experts within the Marine Conservation Program, Parks and Wildlife staff, trained volunteers, Tasmania Police, local fish farms and fisheries boat operators, Surf Life Saving Tasmania and the local community who provided us food and accommodation this mission would not have been possible. It was so empowering to see these different groups come together to save these beautiful, intelligent whales and ensure their future generations. It gave me a lot of hope as we face a global biodiversity crisis together with increasing ocean threats and climate impacts.

Anyone in Tasmania wanting to know more about whale rescue training or our team please visit the Wildcare Tasmania website.

You can also listen to Maddie’s radio interview about the rescue on ABC Hobart.