Orcas are one of only five species known to experience menopause and females can live for many decades after their last calf.  The only other mammals reported to exhibit this unusual life history strategy are short-finned pilot whales, belugas, narwhals and humans. The question of why females of any species should stop reproduction before the end of life is a long-standing evolutionary puzzle.

In this guest blog, Darren Croft Professor of Animal Behaviour at Exeter University explores how and why menopause has evolved in orcas.

Your donation really would mean the world to us in these difficult times.

Over to Professor Croft...

Working with the Center for Whale Research in Washington State, we’ve found that the key to unlocking the mystery of menopause lies in understanding the structure of social groups and patterns of both cooperation and conflict in these groups.

Every year for over four decades, the Center for Whale Research has collected detailed demographic and social data on the Southern Resident orcas who live in the Pacific Northwest. This includes all births and deaths observed in the population since 1976. In addition to this amazing data set, we have been fortunate enough to be able to use an additional, very similar data set collected by Fisheries and Oceans Canada on the Northern Resident orca population. One striking observation that emerged from these long-term studies is that much like humans, female resident orcas typically have their last offspring in their late 30s, but may live into their 80s and beyond. These long term studies and the incredibly valuable data they have produced, provided us with a unique opportunity to investigate why females stop reproducing before the end of life.

One hypothesis is that post-reproductive females play a key role in helping their relatives to survive and reproduce. Resident orcas have a very unusual social structure in which neither sons nor daughters leave the family group. Females reproduce with males from a different group but return to their matrilineal group to give birth and rear their calf. Thus if a daughter reproduces a calf is brought up within the family, whereas if a son reproduces another matrilineal group pays the cost of having another mouth to feed.

We tested this hypothesis and found that post-reproductive females provide significant survival benefits to both sons and daughters but that these effects are much more pronounced in sons. If a post-reproductive female dies, the risk of her adult son dying in the year following her death is up to eight times greater. In contrast, adult females only have a 2.7 fold increased risk.

But how do post-reproductive females help their family group?

One way that females boost the survival of their group is by acting as the keepers of knowledge. The resident orcas feed almost exclusively on salmon and move into the inshore waters to feed on them as the fish migrate back to the streams they were born in to spawn. Timing here is everything; the whales need to know where the salmon will be and when. We found that it is the experienced post reproductive females who guide their group around the salmon foraging grounds and that they do this especially in times of low salmon. 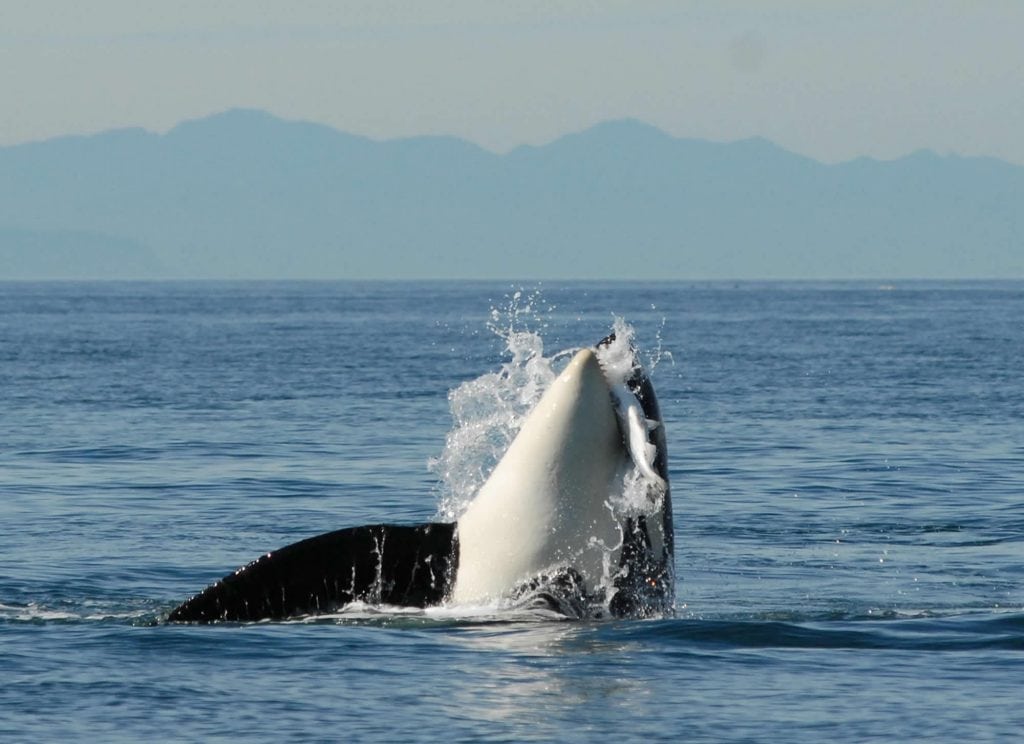 It turns out that the key to answering this question lies in understanding patterns of competition within groups. Because daughters stay with their mothers, if they are both reproducing at the same time then there is going to be more competition within the group for limited resources such as food. Families forage together and share salmon, with offspring often relying on their mothers for food for years. By stopping reproduction, older mothers can avoid reproductive competition with their daughters and concentrate their support on their existing offspring, particularly their adult sons.

Every gift, whether large or small, will help us protect orcas all over the world.

Tweets by @whalesorg
Posted in Blogs & Articles and tagged Ethics and Rights, Orca