Scientists are trying to work out why a pod of orcas have been damaging passing boats off the coasts of Spain and Portugal in recent weeks.

Several boats have been targeted as they sailed through the region with the whales appearing to deliberately ram the boats' hulls. Some have lost their rudders and steering as a result and needed repairs. In one case, a group of whales repeatedly charged a boat for over an hour. While orcas are found throughout the region, it is thought only one pod is probably involved. 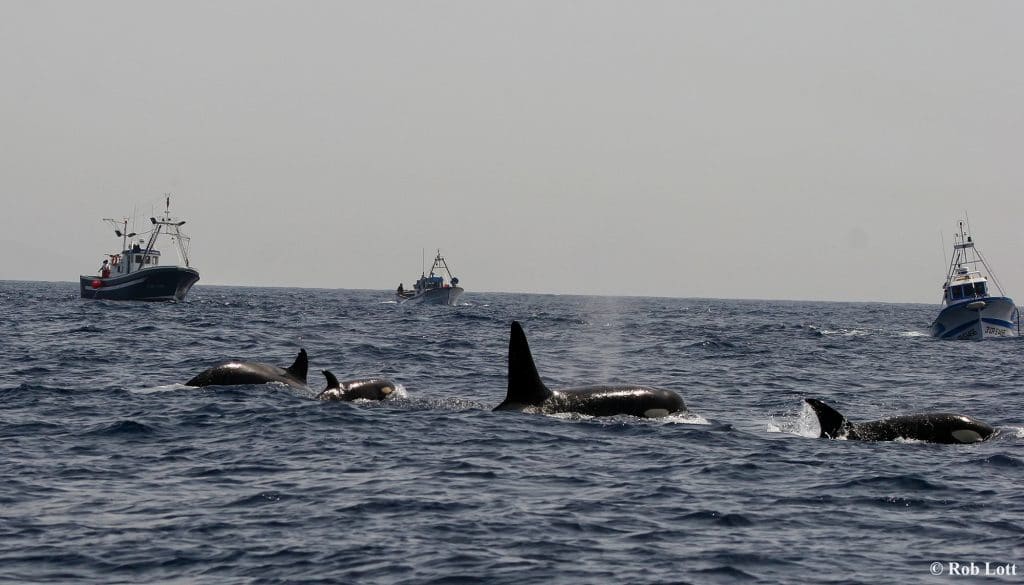 Orcas with fishers off the coast of Tarifa, Spain. © Rob Lott

It is unclear what is attracting the whales to the boats. At this time of year orcas in the area feed on migrating bluefin tuna which can reach speeds of up to 70kph (43mph), requiring a lot of effort for the whales to catch their prey. The tuna is also a target for local fishermen and in recent decades the orcas have learnt an easier way to catch the tuna is to simply remove the fish off the long-lines as they are hauled in.

The interactions with the boats is a concern as WDC Policy manager and orca expert Rob Lott explained: “This is indeed baffling behaviour. For many years orcas have been closely associated with the tuna fishing fleet in the Strait of Gibraltar and have been observed taking fish off the long-lines. We can only speculate on the alarming behaviour of orcas striking sailing boats which may be related to stress as this small, critically endangered population struggles to adjust to the overfishing of its preferred prey, Atlantic bluefin tuna.”

Will you can help protect these amazing creatures today?

Tweets by @whalesorg
Posted in News and tagged Orca