Risso’s dolphins are big. They grow up to four metres in length and with their large dorsal fins, can be mistaken for orcas.  But if you’re lucky enough to see Risso’s leaping out of the water their bulbous head and distinctive body colouration make them unmistakable. Sadly, like all dolphins, they face many threats and we're working with others all over the world to protect them.

The colour of their skin tends to lighten with age and this is partly caused by other Risso’s scratching each other with their teeth during social interactions - interestingly, as their main prey are  squid and octopus they only have a few teeth and only on their lower jaw. Research focusing on these colouration changes - individuals get whiter as they age with some becoming completely white - shows that some individuals may live more than 45-50 years. 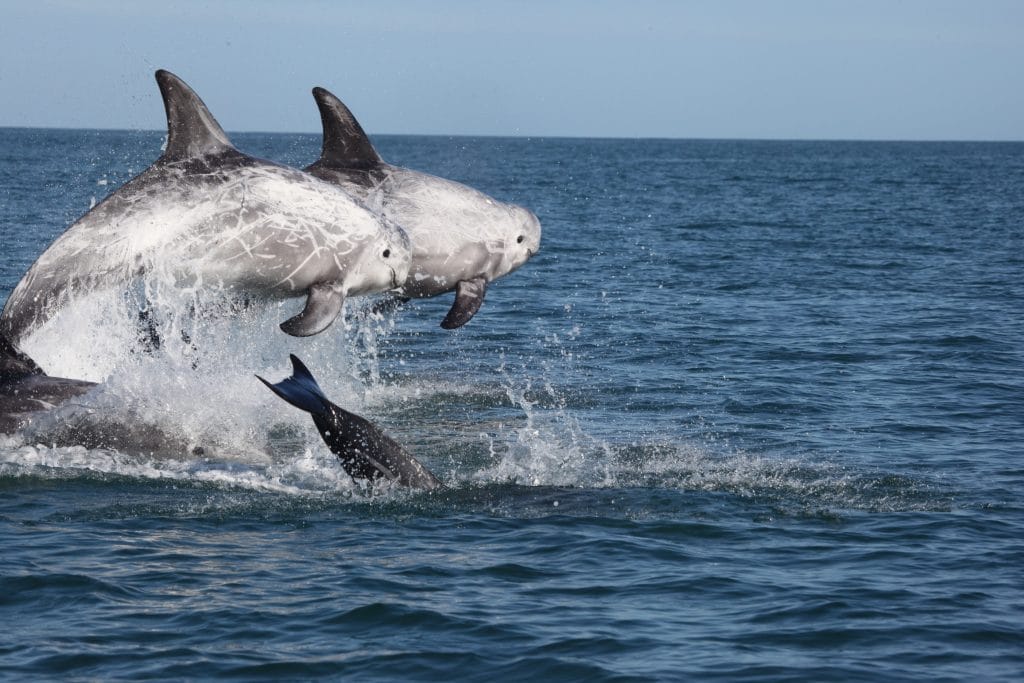 Your donation will help us protect Risso's dolphins from the many threats they face.

Risso’s dolphins have a cosmopolitan distribution and can be found worldwide in temperate, sub-tropical and tropical waters. They are predominantly deep water lovers with a preference for steep trenches on the outer edge or upper slope of the continental shelf. However in several places around the world, including in our field study area off the Isle of Lewis, they can be found just metres off the coast.

The social life of Risso’s dolphins has only been studied in any detail in the Azores where they’ve been found to have a unique social structure described as a ‘stratified community’, with adults grouped by age and sex. Long-term friendships are known to exist between individuals with some individuals seen together over multiple years. 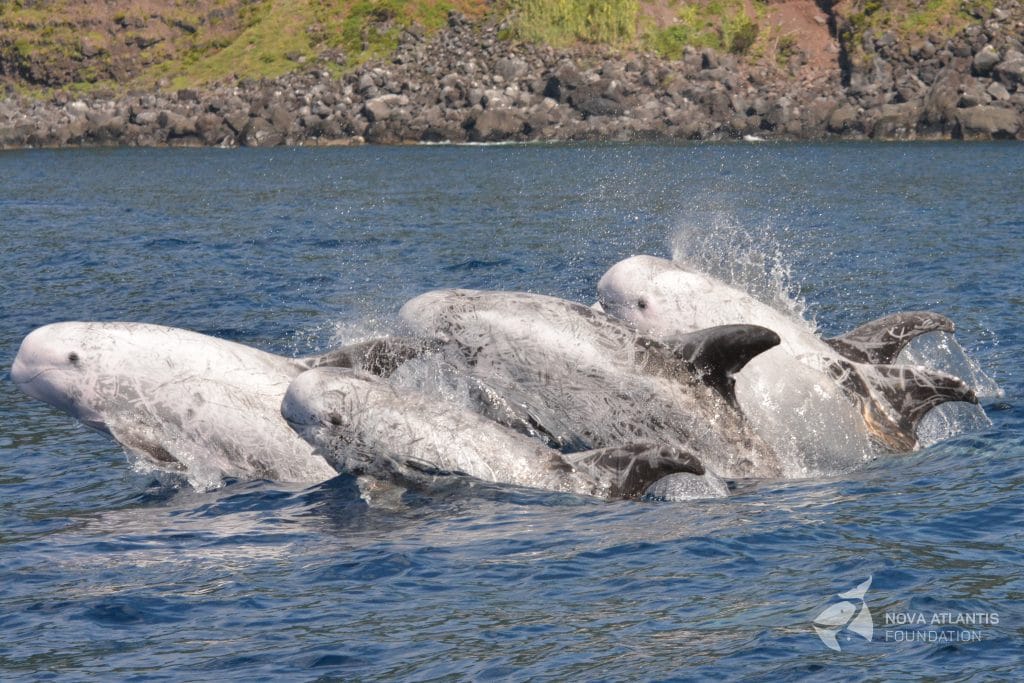 A group of Risso's in the Azores © Nova Atlantis Foundation

Here at Whale and Dolphin Conservation, we’ve been studying Risso’s for some years now. Our project along the north-west coast of Wales in the waters around the Llŷn Peninsula and Bardsey Island has been running since 1999, and our project off the east coast of the Isle of Lewis in the Scottish Outer Hebrides – which represents the northern most limit of their distribution – has been underway since 2010. Our research has generated some fantastic insights including the first ever documentation of hybrid dolphins in UK waters – in this case, the offspring of mating between bottlenose dolphins and Risso’s.

The photos we take of the dolphins we encounter in both our project areas document the same individuals returning to the same places year after year, hanging out with the same old friends and bringing new babies with them.  In turn, the evidence we’ve been gathering about how important these areas are to them has been instrumental in persuading the Scottish government to create a marine protected area for them in the Outer Hebrides.

For science, and more importantly for conservation, to be effective, research should never be undertaken in isolation and collaboration between researchers working either in the same area, or in this case, on the same species, is always welcome and the most valuable and productive way to work. No matter how long you’ve studied a species there’s always more to learn!

With this in mind, I got together with Risso’s researcher, Karin Hartmann from the charity Nova Atlantis. Karin has been studying Risso’s in the Azores since 2000 and has catalogued around 2,000 individual dolphins. We decided to hold a workshop at the World Marine Mammal Conference in Barcelona in December 2019. Our workshop brought together 28 Risso’s researchers from 10 countries over three continents. Between us we represented 16 research sites and over 4,200 individual photo-identified individual dolphins. Quite a gathering!

We called our new Risso’s collective – ‘Keep on Gramping’ because Risso’s dolphins are the only member of the scientific class known as ‘Grampus’. We discussed and shared ideas and findings on all kinds of topics including population dynamics, social structure and life history, feeding behaviour, human-made threats, health and disease and emerging research techniques – for example the use of drones. 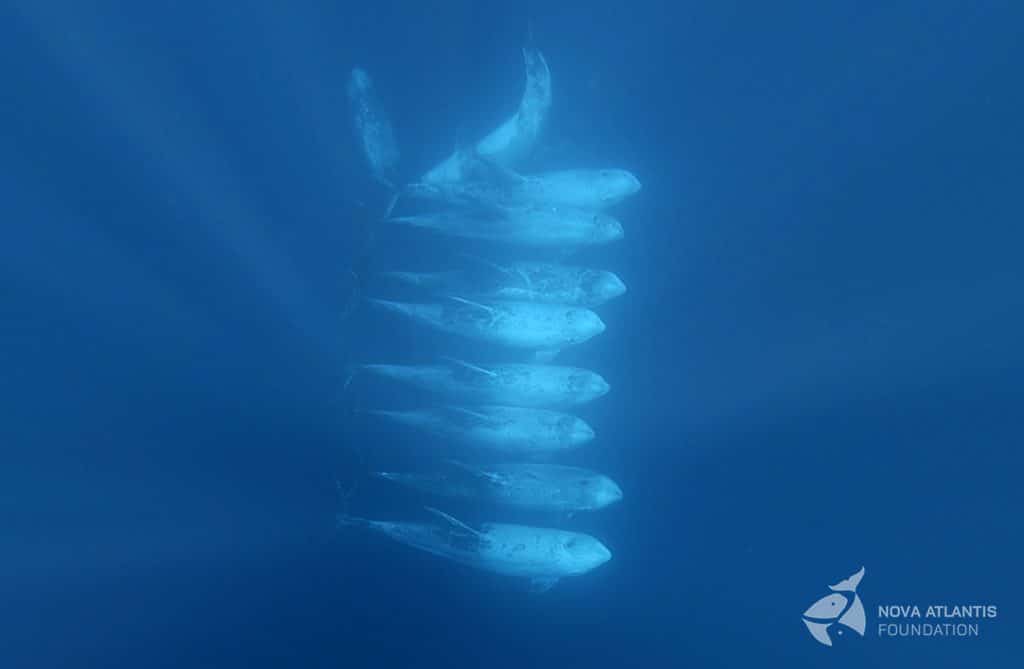 An overarching focus of our workshop was on how we could and should collaborate in the future. Data sharing stimulates collaboration between scientists and can lead to informed decision making which in turn results in real world conservation and protection measures being put into place. 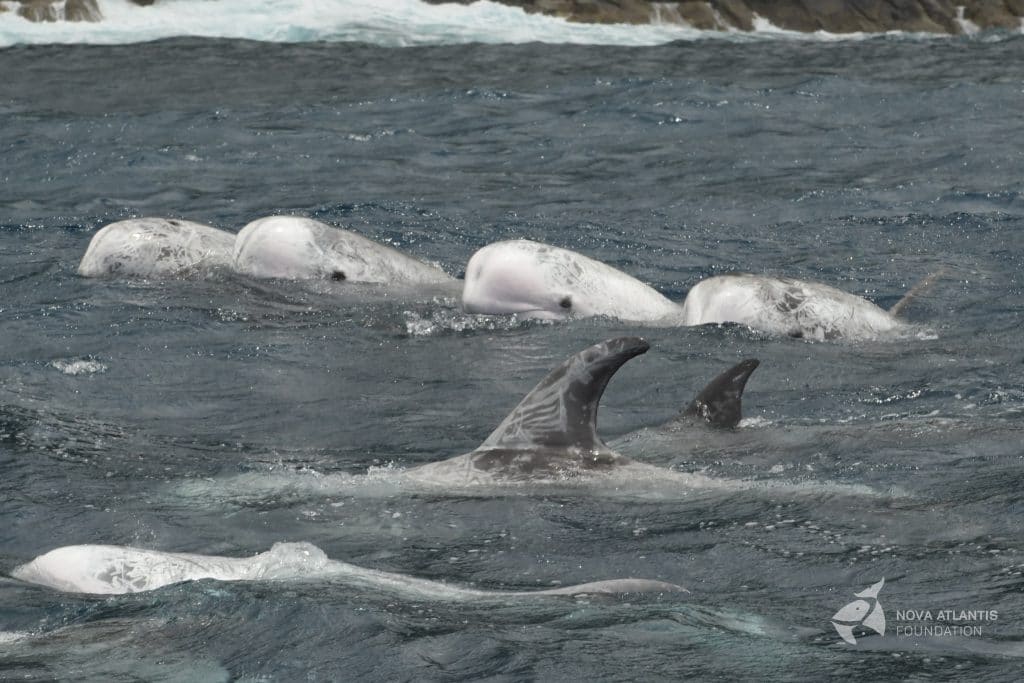 Sadly, Risso’s dolphins face a multitude of threats with some more acute depending on where they live. As with other species of dolphin, fatal entanglement in fishing gear is a major danger. They are also hunted in some parts of the world, targeted by swim-with-the-dolphins tourism in others, and as deep-divers they are particularly susceptible to underwater noise. The more we know about the species the more we can help to protect them into the future. It’s also hugely important to raise the profile of these little-known dolphins and to share the magnificence of these special dolphins so we’ve created a website as well as Facebook and Instagram pages where you can learn more about our research and these amazing dolphins.

You can only care about what you know about and so it is our duty to share the Risso’s love.