Dr Nicolette Scourse is an academic, educator, author and illustrator with a passion for whales, dolphins and the ocean. In her guest blog she tells the story of Rastus, an extraordinary dog with a love of dolphins.

I was looking down from the jetty into limpid clean shallows of blue. Suddenly I became aware of the dog. He too was sitting on the jetty with an air of expectancy, basking in adulation from waiting passengers. Excitement and tail wagging increased as the boat drew alongside. We went aboard. The dog perused us, lay down, and waited for the scudding through water, a breeze through the hair, the whiff of waves and open sea. 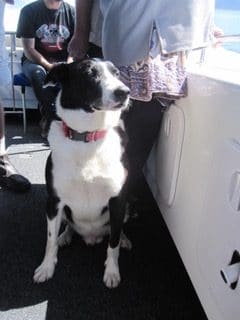 Then he transformed: riveted on the sea ahead he now ignored us all. Meanwhile the skipper gave us a very particular briefing beyond the usual safety procedures: ‘Stand with your legs apart and knees slightly bent to brace yourself, so Rastus can rush from one end of the boat to the other…’ Meanwhile Rastus, the dog, scrabbled as high up the prow as he could. He lay low, belly tight to solid deck with paws extended – spread and tense. He craned his neck as far forward as he dared to hang his head down over the edge getting that little bit more view of the water below.

As sea blue darkened, albatrosses wheeled overhead and Rastus scanned the sea ahead and around the boat. His ears were pricked and tail tense. We saw nothing but blue, but the twitch which had started at the tip of his tail crept up to its base and became a significant force of wild, wagging energy. He barked frantically and suddenly galloped up the port side of the boat barking. He reared up to support himself on the gunwale and poked his head out below the handrail, barking continually. 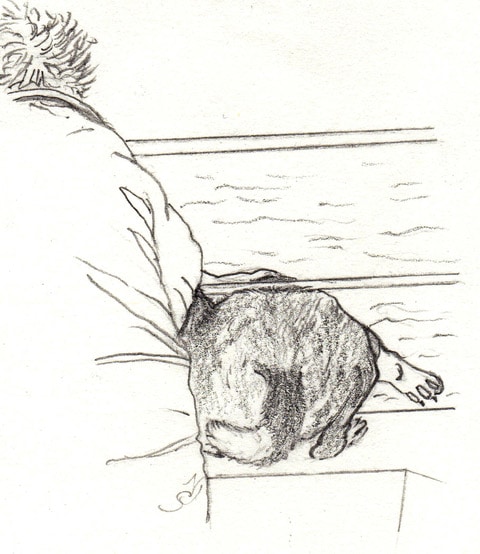 And there they were – beautiful, sliding and arching through the surface – 15 greyish, velvet-skinned common dolphins. Breaking clean out of the water, porpoising, leaving jet streams of spray, they skirted fast around the boat. Rastus tracked them from side to side, bounding through legs and people as if they did not exist. It was difficult to choose between the fascination of this extraordinary dog, or to see speeding dolphins leaving tracks of breathing gasps as they made rapid passes under the boat. Dog and dolphins darted like lightning in three dimensions. I was longing to see both simultaneously - a drone might have captured who was chasing who. In his human’s words: ‘The dolphins seem to play with Ras and respond by splashing water towards him with their tails.’ 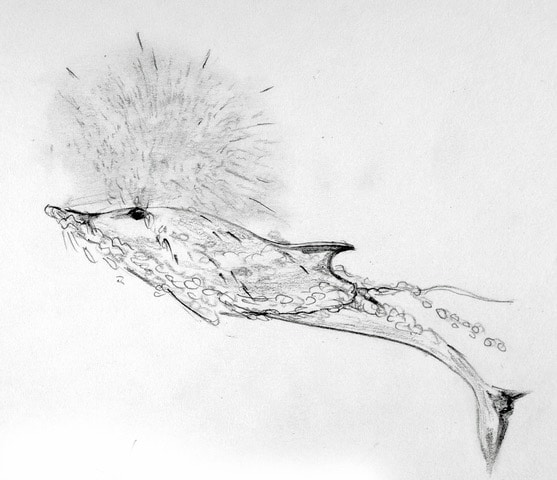 Later in the day, eight bottlenose dolphins glided up to the boat, much more leisurely than the common dolphins. Their backs arced through the water elegantly and slowly. Rastus barked throughout their sojourn with us, crouching low, hanging over the bow. He inched his feet and hindquarters closer and closer to the edge so that finally his entire upper body was hanging over the bow. His human told me that he behaved differently with different species and with different pods of dolphins: he knows one from another. His extreme excitement in the morning had been because he had not seen this particular pod of common dolphins recently.

Dogs and dolphins hear high frequency sound, which we do not. Dolphins make high frequency sounds for social communication, sharing and coordinating knowledge and activities. Each individual has their own personal ‘name’ – a signature whistle. They know each other’s whistles and call each other by copying their whistles.

I wondered, were the common dolphins communicating between themselves with Rastus eavesdropping, recognising their individual name calls? Or were they treating him as one of their pod and projecting sounds, perhaps even their own ‘name’ whistles, at him? Or had they given him a name between themselves? Could he recognise their ‘dialect’ versus that of the local bottlenose dolphins? Both species would have located our boat by very high frequency echolocation.

His human gave me some background: ‘Ras started working with ...[us on the boat]… from the age of six weeks. At first he could not see over the side of the boat but would show great excitement when dolphins were around. At around six months of age he saw his first dolphin and has been obsessed ever since and can find dolphins even when nobody else has seen them... from many years [13] of observing him in action we think that he is hearing the dolphins speaking to each other while underwater. Ras can even be asleep in the sun and all of a sudden he will jump to his feet, run around the boat and start to bark in the direction of where the dolphins actually are in the water.’

Ultrasonic calls of these dolphins had been inaudible to us, probably loud to Rastus, high-pitched sounds being significant in canine lives. A question remained... his dolphin ‘obsession’... did Rastus have an unusually acute and well-developed sense of hearing? In human terms, was his sensitivity akin to that of a piano-tuner or a musician?

Find out more about Nicolette and buy her book