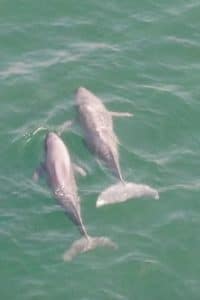 The first ever drone footage of the Indo-Pacific finless porpoise has been captured by OceansAsia’s. The film shows a pod gathering in Hong Kong waters, a rare occurrence as they seldom come together in big groups.

The large numbers of finless porpoise seen in the area since lockdown could be due to quieter waters. Restrictions on ferry travel in Hong Kong have seen these shy creatures appearing in previously busy ferry lanes.

However, the footage has been release along with a concerning report on the current status of the local porpoises, which shows the past several years have seen an increase in them washing up on Hong Kong beaches - 2019 being the worst year to date (43 strandings).

‘The last comprehensive study of the population of Hong Kong finless porpoise was carried out in 2002 and estimated the population to be 220 individuals. We have no way of knowing whether this number is still reflective of the current population,’ says Dr. Teale Phelps Bondaroff, Director of Research for OceansAsia and author of the report.

As of May 16th, there have been 15 strandings in 2020 but many deaths are not recorded, so numbers are likely to be much higher.

This elusive porpoise means studying their behaviour is not easy, but the use of drones in a responsible way has revealed more about their lives.

Dr. Porter says; ‘My worry is that as we slowly learn more of this population’s habits and lifestyle, we will be too late to save them, as the number of dead porpoise is increasing dramatically every year.’

Read about how WDC is helping to prevent porpoise deaths in nets.

DONATE TO HELP OUR WORK