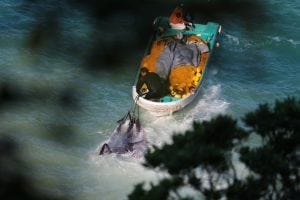 Figures from the latest Taiji dolphin hunt season, which began last September, suggest that around 130 individual hunts took place with over 500 dolphins slaughtered.

Every year, starting on 1st September, fishermen in the Taiji region of Japan leave the shore to kill a range of different species.

Once a pod of dolphins is spotted, fishermen bang on metal poles, creating an underwater ‘curtain’ of noise, which confuses and disorientates the dolphins. They are then herded (or driven) together to shore. Some of them, usually juveniles and calves, may be allowed to return to the ocean, alone, frightened and stressed.

The rest are not so lucky. They could be slaughtered for meat or hand-picked to live out their lives in a dolphinarium, where they will be forced to perform tricks for their dinner.

Around 180 dolphins were taken alive in the hunts this year for sale to aquaria.

You can read more about this issue and about what WDC is doing to end drive hunts here.