Joelle Davies has always wanted to join our research team in Wales on their annual dolphin and porpoise survey. This year she made it happen and the experience was everything she had hoped it would be, and more. If you think you might like to join us next year, or you just want to know what it's like to volunteer for a project like this, read Joelle's guest blog. She paints a fascinating picture of a week spent watching dolphins and porpoises from the western-most point of Wales. 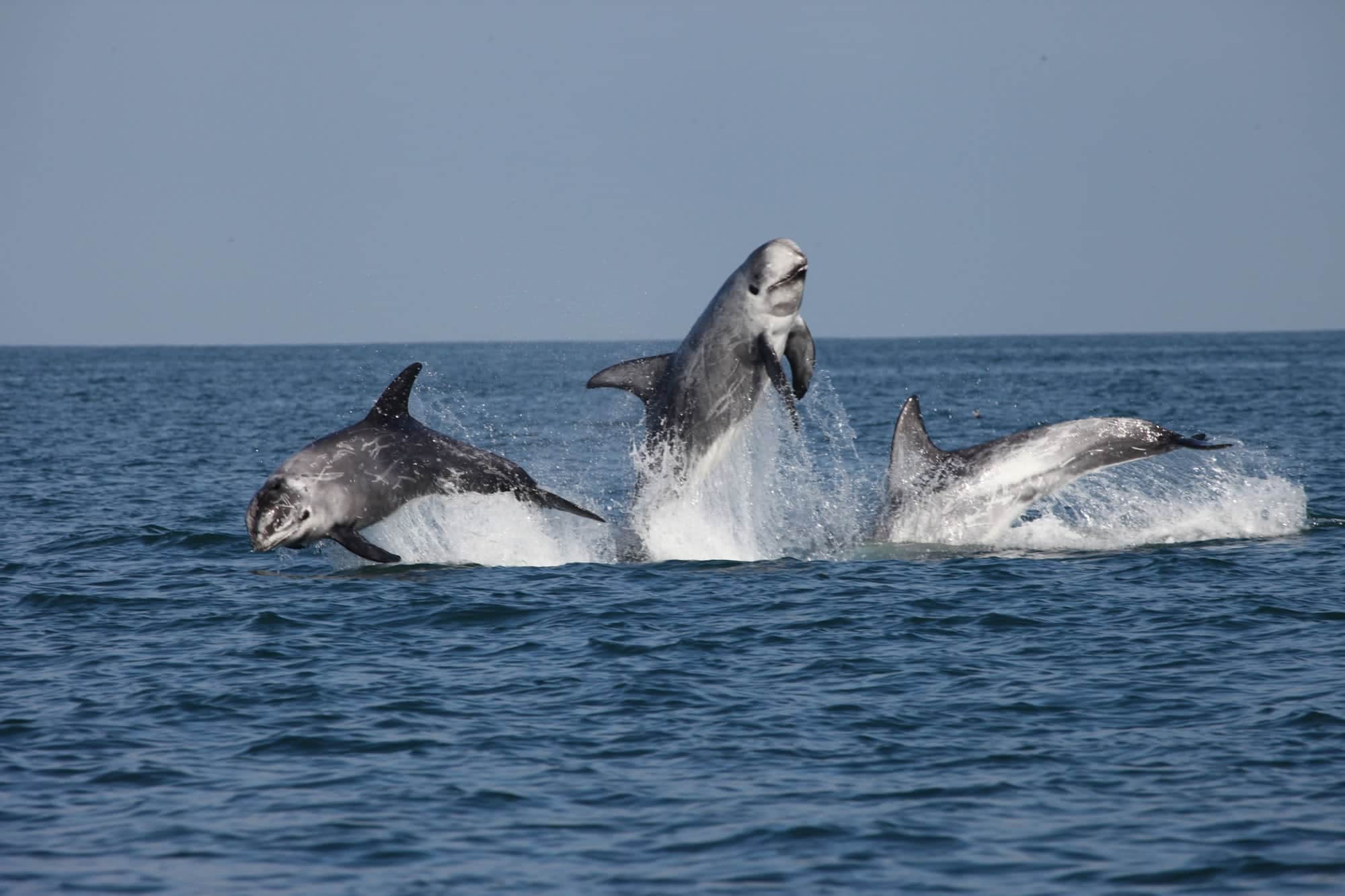 I volunteer in Whale and Dolphin Conservation’s UK office and so I knew about their study of the dolphins and porpoises who live around Bardsey Island in North Wales. I promised myself that one day I would be part of this project and experience this mystifying island for myself.

Its beauty, unforgiving tides and changeable weather have given Bardsey an almost ethereal allure.  The stories of men lost at sea, beguiling poetry written by many a traveller overcome by its windswept landscape of gorse, heather and lichen, intrigued me. So you can imagine my thrill when I finally arrived at Aberdaron, on the Llŷn Peninsula, after a seven-hour train journey. I felt I had arrived at the end of the world rather than the westernmost point of Wales.

It was Friday evening, the day before the official start of our week. I stayed at Gwesty Ty Newydd, one of a few guest houses in the village and a very charming place, situated bang in the middle of Aberdaron Bay.  It has a terrace with far-reaching views of each headland at either end of the bay, as well as being right next to a beautiful church. Soon after being freed of my luggage I went for a walk on the beach to explore and partake in a bit of beachcombing, a habit I picked up growing up in the Caribbean.  On my way back towards the guest house I saw people waving at me and lo and behold it was Pine and Vicki from WDC, the leaders of this project. Did I mention that Aberdaron was a small place?  Excitement was in the air. 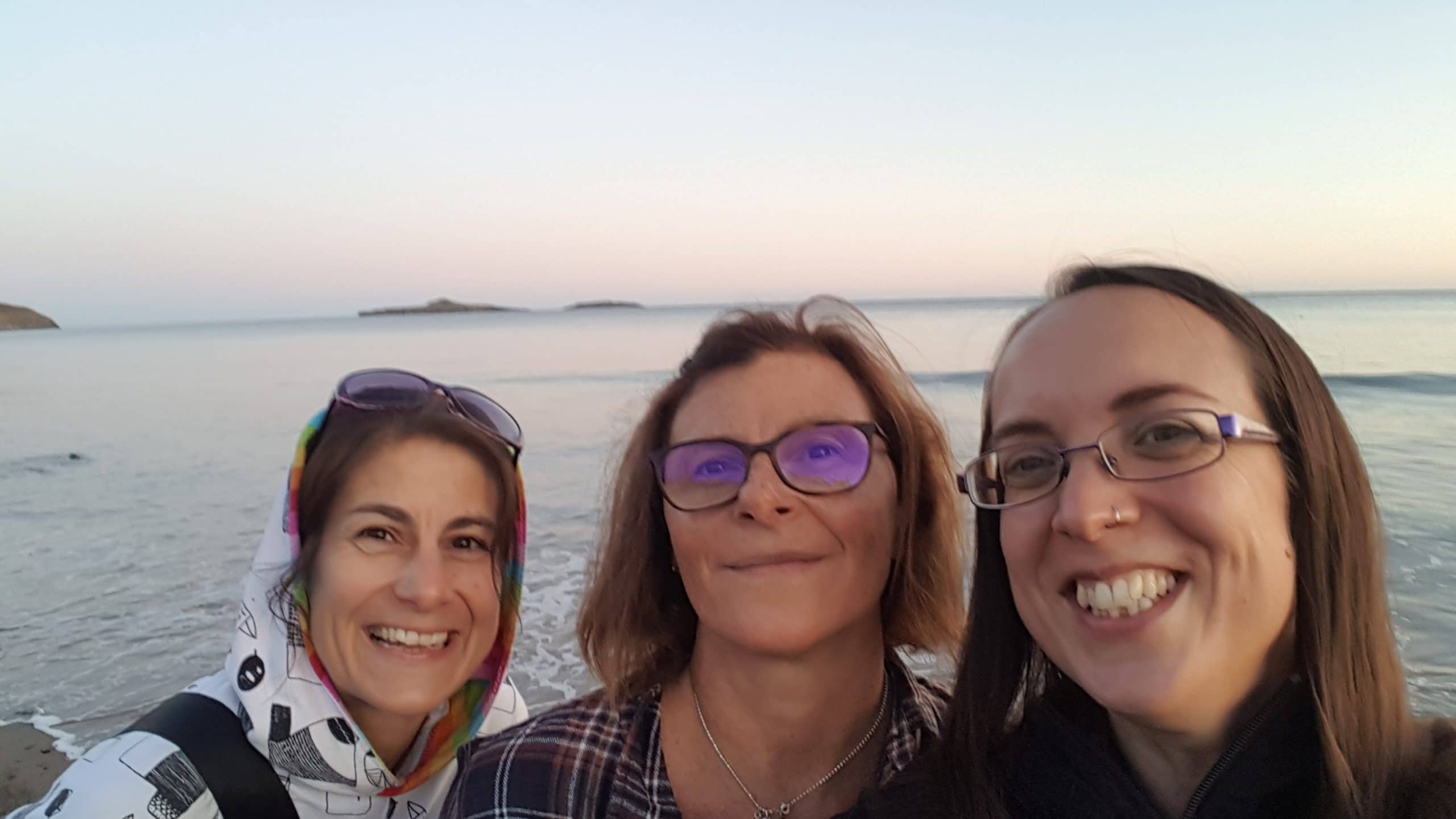 The following day, I went to explore the Porth y Swnt National Trust after breakfast, where I was taken on a geological, agricultural, literary and spiritual journey of the Llŷn Peninsula and its unique and diverse landscape and wildlife. After feeling a little bit more versed in the history and geography of the area, I went for a coastal walk on the northern edge of the headland then headed back to the guest house for lunch.  Soon after I was collected by Pine and Merel, a fellow volunteer who had just arrived from the Netherlands, and we were taken to ‘Geufron’ our accommodation for the week ahead.

In previous years, WDC research staff and volunteers have based themselves on Bardsey Island itself, but this year we were to be stationed on the mainland.  Our work would either be shore-based at one of two observation sites or out on the boat, depending on the weather conditions.  Later that afternoon we were joined by Rebecca, an undergraduate at Oxford University, and Ruth, a university lecturer, completing the four volunteers. Finally, Simon arrived, an environmental scientist who’d be working with Pine on the boat, operating the hydrophone (an underwater microphone to record dolphins and porpoises) making our group, some might say, lucky number seven. 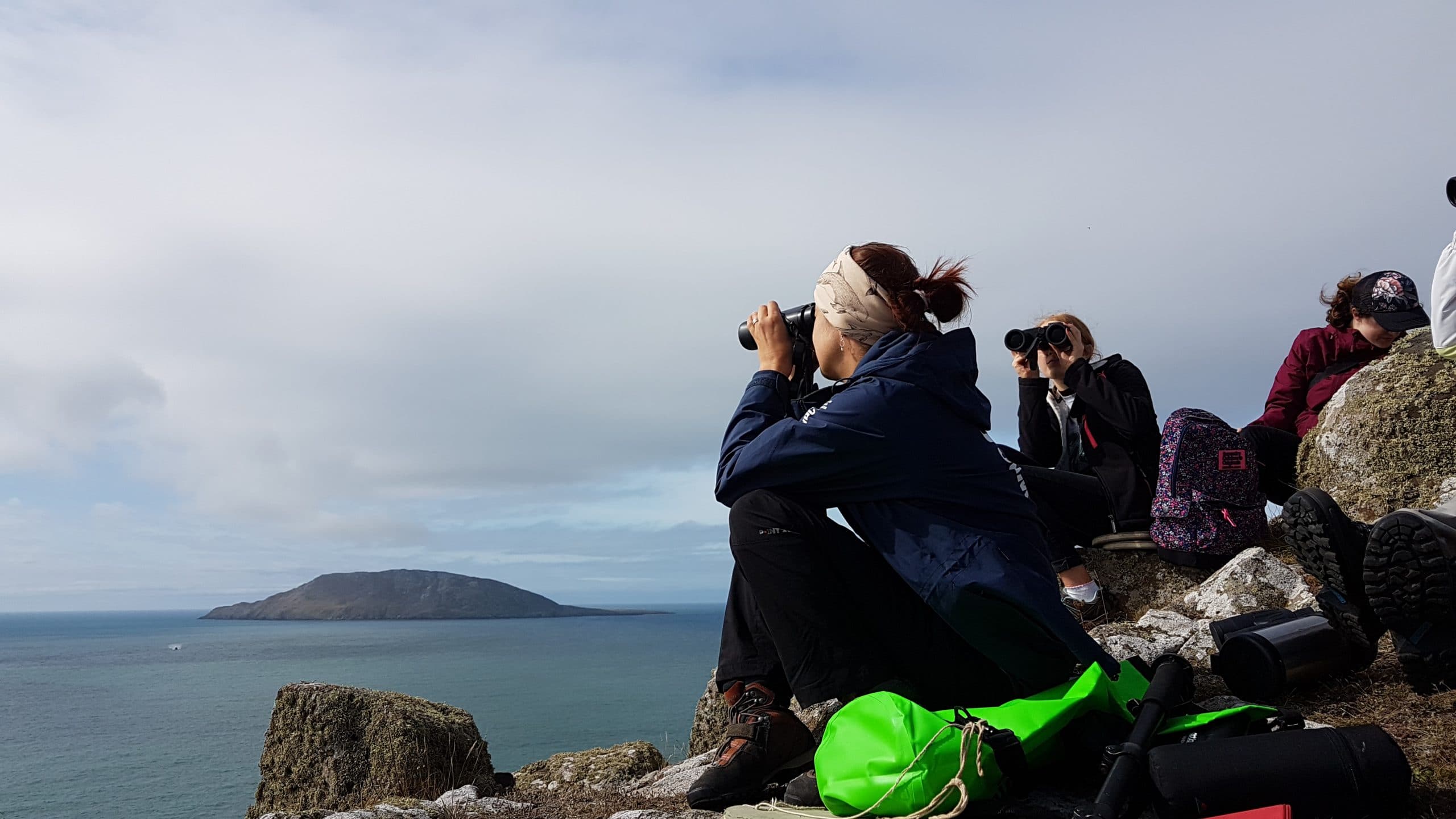 The mystical island of Bardsey enchanted us from our viewpoint

On Sunday, we were taken to the observation sites - St Mary’s Well and Pen-y-Cil - to familiarise ourselves with these settings and get some training on the techniques we’d be using.  These platforms were perched high above the edge of the cliffs to give a wide, sweeping view of Bardsey Sound, the body of water that separates the mainland from Bardsey Island.   Vicki guided us through the scanning procedure.  The first person scans an area for 10 minutes, using binoculars with a built-in compass, starting from the headland to the east and sweeping towards the headland to the west. Bardsey Island features in the middle at around five minutes.  This task requires a steady hand and an ability to move at a consistent pace. The second person, sitting close to them with the survey sheet, has the task of logging the weather conditions and, most importantly, information about any dolphins or porpoises spotted, including number, location and behaviour. The third person is on their ‘break’, taking this little gem of non-allocated time to grab something to eat, stretch their legs, snap photos or continue ad hoc spotting with binoculars.  This process continued on a 10-minute rolling basis. 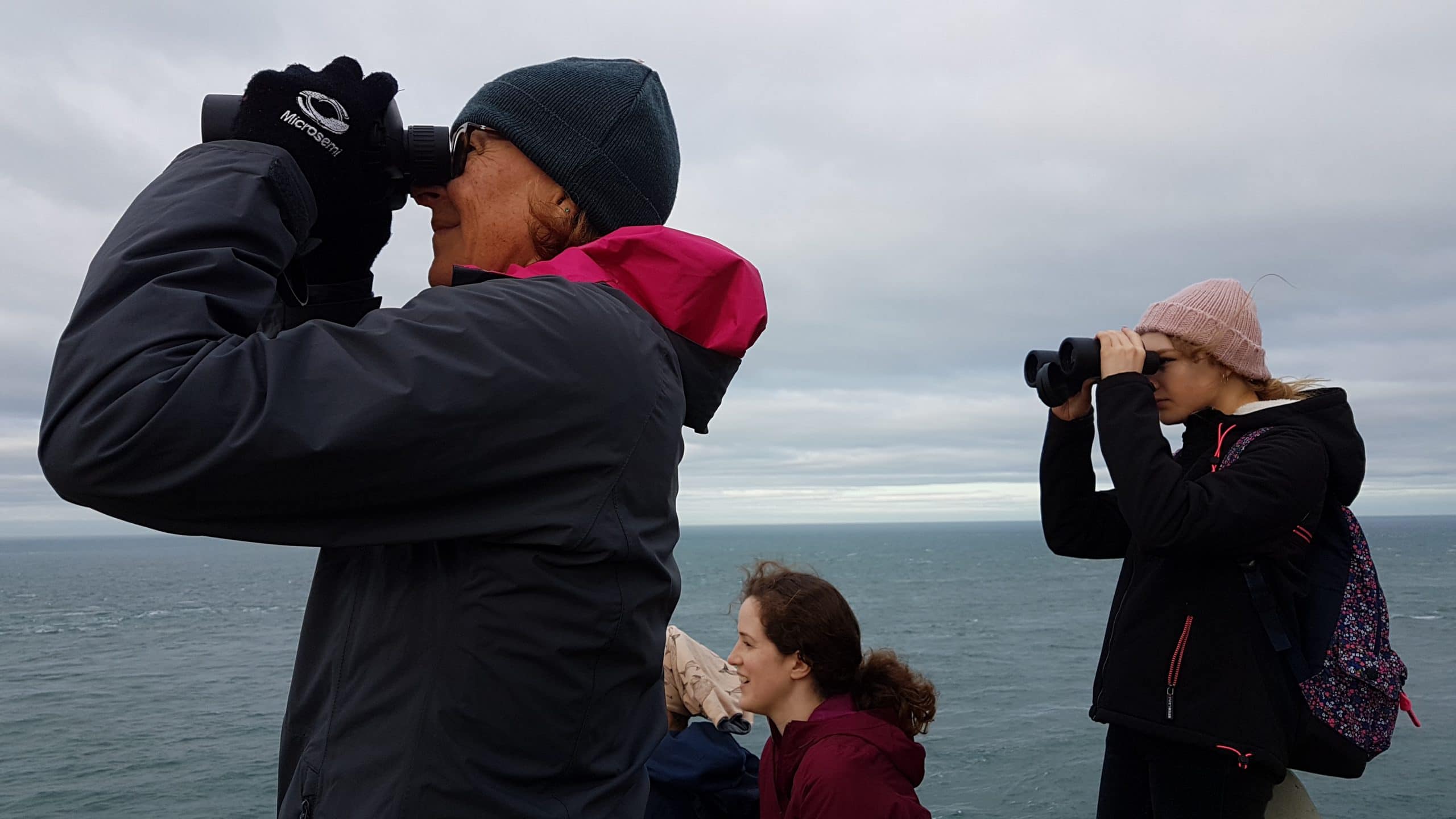 I'm on the left of the picture, scanning the sea - next to me are Pine, Merel and Rebecca

On our first proper day of work, Vicki and the four of us volunteers headed to St Mary’s Well observation platform while Pine and Simon went to the boat to prepare the hydrophone for our sea outing the next day.  The weather was agreeable, just slightly windy on our perch - lots of layers and wind-proof gear is essential.  On our very first scan we spotted a couple of harbour porpoises who continued to hang around for most of the day.  Towards the end of the day, as we were in the middle of a change-over, Rebecca called out to say she had seen a Risso’s dolphin just near the edge of the cliff below us. We were graced with not one, but five Risso’s including a mother and her calf, and three juveniles, who are distinguished from adults by their dark grey bodies. 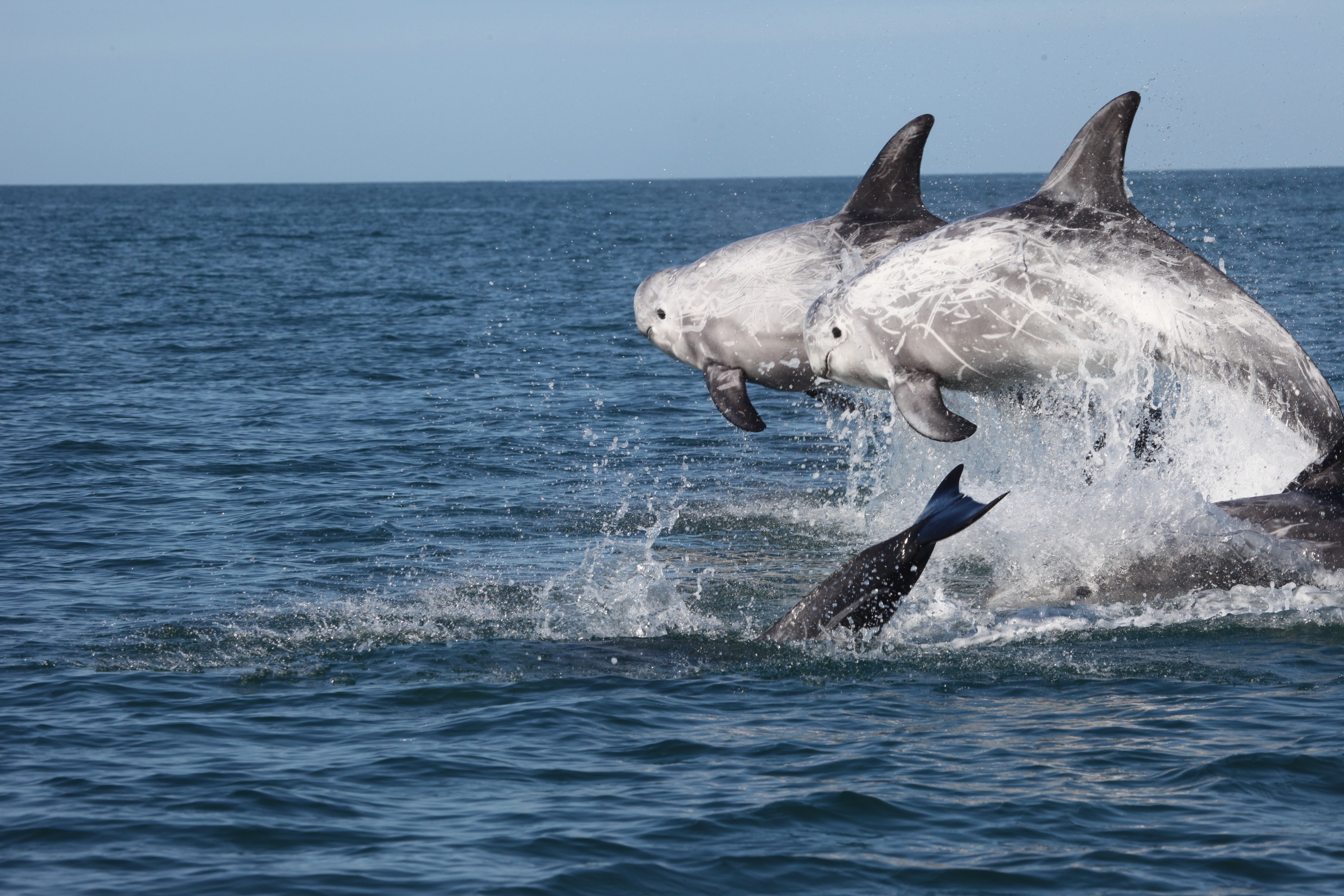 Once you know what to look for, Risso's dolphins are unmistakeable

Over the next few days, due to the exceptional weather, we were able to go out on the boat.  The Highlander is skippered by Tony, and is a robust, hardy, utilitarian vessel; nothing about it exhibited comfort or luxury.  Our first ‘boat day’ was very choppy and we were out all day with no encounters.  On the second ‘boat day’ the sea was much flatter and there was hardly a cloud in the sky.  We set out full of optimism in the still air.  Soon we encountered a small pod of Risso’s dolphins and followed them in order to get photographs. Photos are vital to this kind of research as they enable us to identify individuals and build a picture of their lives, habits and social structures. 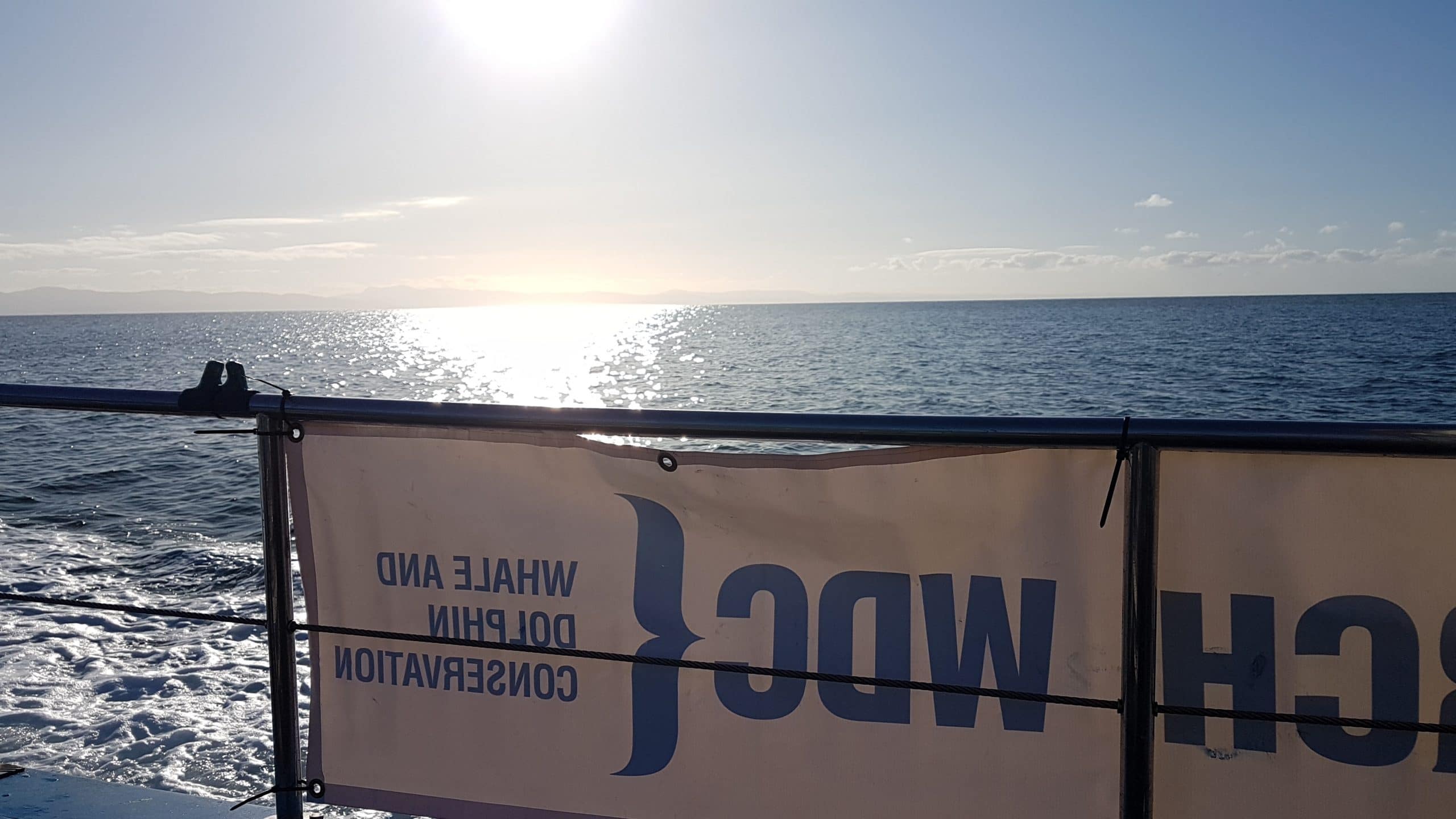 The Risso’s seemed to be foraging for food as they would come up for air and then disappear only to turn up somewhere completely different.  After that excitement we had another encounter. This time it was a much larger pod of common dolphins who entertained us by bow-riding (surfing the wave created by the bow of the boat pushing through the water) - a magical experience for all of us.

Evenings back at Geufron were relaxed. After a day working outside in the elements, it was so nice to arrive, de-robe, kick back, watch the sunset and help prepare the evening meal.

Saturday came all too soon, and meant the departure of Ruth, Rebecca and me. Merel was staying on for a second week and three new volunteers would be arriving to take over our duties.  I loved being part of this project - the skills I learnt, the beauty and isolation of the location, the friendships formed and the fresh air, not to mention the dolphins and porpoises.

One of the things that really struck me was learning that scientists no longer have the luxury of studying whales and dolphins just to learn more about them.  They must learn more about them in order to protect them. A sign of the times we live in and all the more reason for projects like this to continue.

Thinking about joining us?

If you are interested in joining us next year or in volunteering with in another way, drop us an email - we'd love to hear from you.