Today is the start of the 2019 Rugby World Cup in Japan.  As a Welshman, I am of course looking forward to the rugby, but as a lifelong campaigner for whales and dolphins I’m also acutely conscious that the games are being held in a country whose government actively subsidises one of the world’s last vestiges of commercial whaling.

Just as the World Cup kicks off, millions of people are also taking to the streets in towns and cities across the world to call for action on the climate crisis.

So where do the issues of rugby, climate change and whales fit together?

A report by Christian Aid this week highlighted the fact that low-lying countries such as the proud rugby-playing countries of Fiji, Tonga and Samoa will be unable to defend themselves against climate change. The report notes that these nations face ‘climate injustice’ as long as rich governments such as Japan’s block initiatives to combat climate change.

What the report doesn’t say is that some of these states’ closest neighbours in the Pacific (Kiribati, the Marshall Islands, Nauru, and the Solomon Islands), alongside a number of Caribbean island nations, all consistently align themselves with Japan’s government in supporting whaling and, in doing so, help to make climate change worse.

There is growing evidence of the important role whales play both in keeping our oceans healthy and in fighting climate change.  Whales are part of what campaigners such as Greta Thunberg and George Monbiot call ‘natural climate solutions’ to the current crisis.  Just as we need more trees, we also need more whales to move nutrients around the ocean and to draw down carbon from the atmosphere.

Having lost close to 80% of the biomass of whales to whaling and human exploitation of the oceans, we now desperately need to see populations of whales recover. Every day that whales and dolphins don’t swim freely in the oceans is a day closer to a climate tragedy for humankind.

In commissioning the slaughter of whales and buying the votes of other nations, the Japanese government and its proxies are reducing the world’s resilience to climate change.  And it will be the poorest and most low-lying countries which suffer first.

This is clearly not the message the Japanese government wants to send out when hosting the Rugby World Cup and, next year, the Summer Olympics.  They wish to present Japan as a modern nation which is open for business and tourism. But they also want to portray whaling as an intrinsic part of Japanese culture, misunderstood and misrepresented by foreign campaigners.  But the truth is that whaling is not as popular in Japan as they would have you think.  Out of a population of around 127million there are only 300 or so people involved in whaling, propped up by a handful of Japanese Liberal Democrat members such as Prime Minister Shinzo Abe and LDP Secretary General, Toshihiro Nikai who are willing to see whales and dolphins die for their own political advantage. 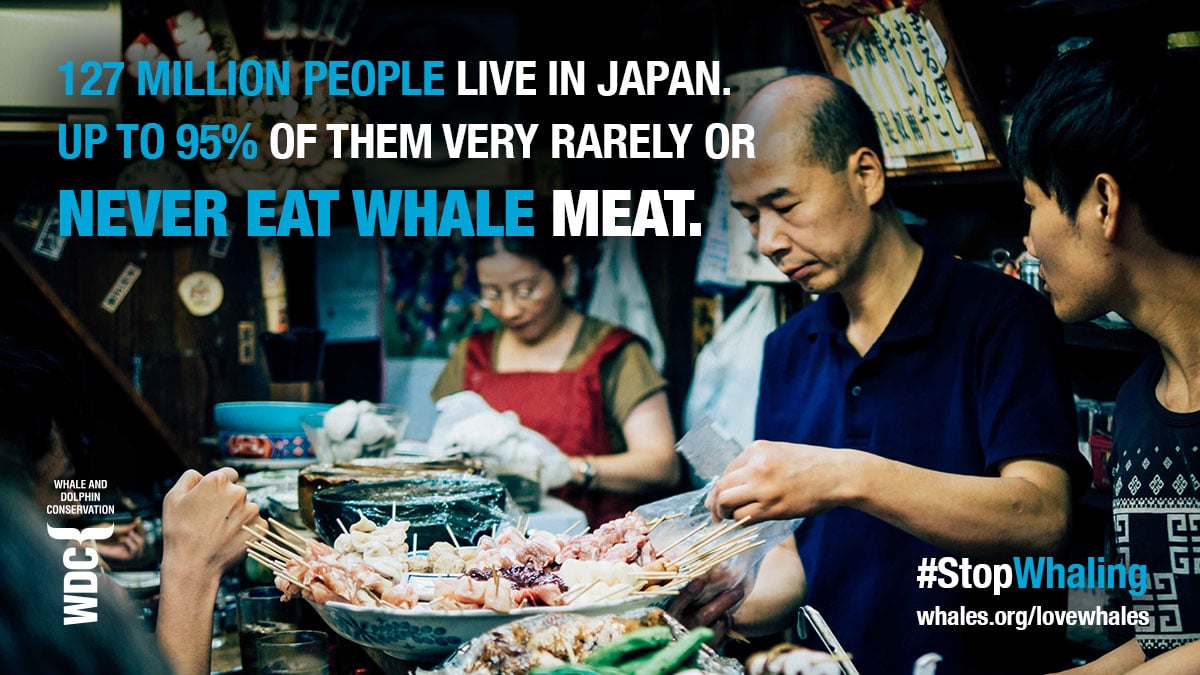 Outside of this small clique, there are signs that things are changing in Japan.  The consumption of whale meat has fallen by 99% in the last 50 years and, in contrast, the Japanese whale watching industry doubled between 2008 and 2015.  A growing number of young people oppose whaling and Japanese activists have been taking to the streets to protest against the controversial drive hunts in Taiji.

So while WDC will continue to pursue those who promote whaling in Japan, we also need to support the growing anti-whaling movement in the country.  There is much to love and admire about Japan, and it will be the Japanese people who finally bring an end to whaling, just as British, American and Australian people did in their countries.

So if you are lucky enough to be watching the rugby live, and enjoying the sights of Japan, please remember not to eat the whale meat and let people know that you are making a conscious choice to choose friendship with the people of Japan, whilst holding their government and prime minister to account.

I for one will be cheering for Whales!