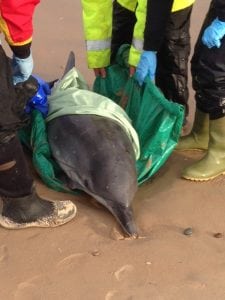 A report on whale and dolphin strandings in the UK during the last seven years has revealed that the number of strandings increased by 15% on the previous period. The study was carried out by the UK Cetacean Strandings Investigation Programme (CSIP) on behalf of the Department for Environment, Food and Rural Affairs.

Sarah Dolman, WDC's bycatch lead, welcomed the report's publication. "The UK strandings work is invaluable for us to understand the natural and human-induced causes of death in whales, dolphins, porpoises and other marine species that strand and die around our coastline. We commend the important work that the CSIP team do, and WDC are proud to assist where we can.

52 of the strandings events involved two or more whales or dolphins, including large events involving long-finned pilot whales. 21 species in all were recorded, including Cuvier's beaked whales and sperm whales.

Post-mortems carried out revealed that disease was the major cause of death in porpoises while disease and bycatch were factors in common dolphin strandings with a large number also live-stranding.

Further analysis for the period from 1991 to 2017 show that bycatch was the major cause of death in stranded whales and dolphins during the period. Ship strikes were involved on several occasions while the study also found a relative increase in starvation in stranded harbour porpoises in recent years.

Another worrying revelation is that concentrations of polychlorinated biphenyls, whose use has been banned in the UK since 1981, remain high with the greatest risk posed to long-lived whale and dolphin species such as bottlenose dolphins and orcas. The impact on orcas is particularly worrying as it has been observed that some female orcas in European populations are now failing to produce any young.

Find out more about strandings

George is responsible for WDC's websites across the various countries where we operate.