As the G20 global leaders meet in Japan, Whale and Dolphin Conservation’s CEO, Chris Butler-Stroud reflects on the political motivations that keep the whaling industry alive, despite the fact that up to 95% of Japanese people very rarely or never eat whale meat.

So it would appear that those in control of Japanese whaling policy have decided that their future commercial whaling is too embarrassing to risk publishing their self-allocated whale-kill-quotas before sitting down with the G20 members today and tomorrow in Osaka, Japan. 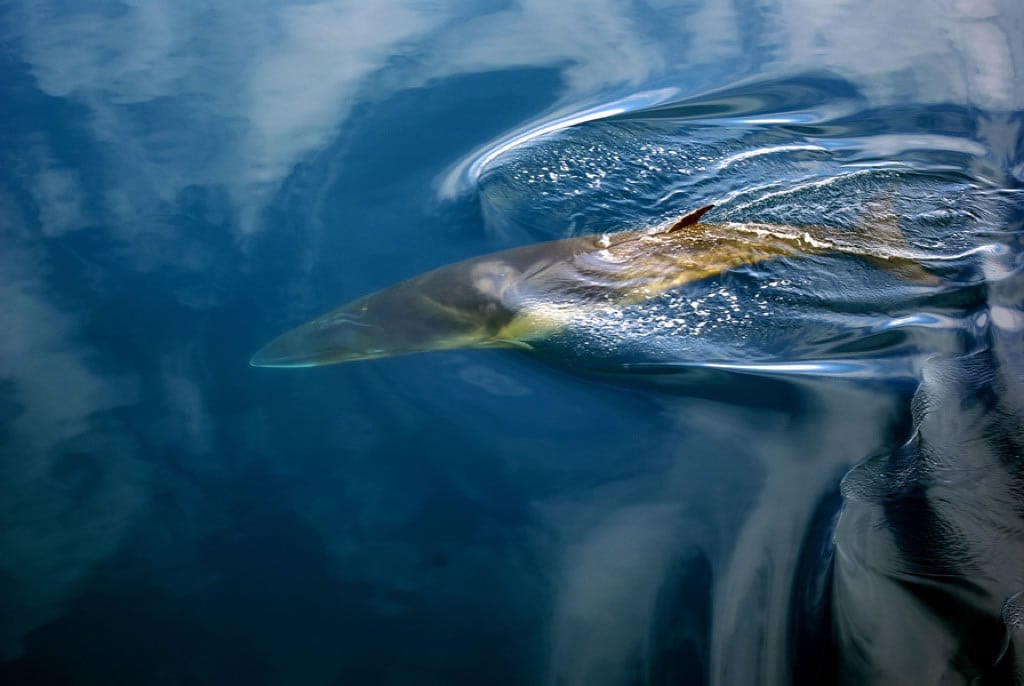 Again, the minority championing the resumption of commercial whaling are seeking to avoid the humiliation that whaling has become on the international stage by hiding the issue away.

The Japanese newspaper, the Ashai Shimbun, reports that the ‘…government will postpone announcing the maximum number of whales that can be killed for commercial purposes out of concerns of a backlash at the upcoming Group of 20 meeting in Osaka…’

Reports out of Japan further suggest that the ‘…figure will be announced after the completion of the June 28-29 meetings, which will be attended by anti-whaling countries, including Australia, and chaired by Prime Minister Shinzo Abe.’

So why is Prime Minister Abe so concerned to avoid the issue of whaling before sitting down with some of the world’s biggest economies?

Prime Minister Abe has sought to wrap whaling in the flag of domestic nationalism to help consolidate his power in the ever-present factional infighting of the Liberal Democratic Party (LDP) within Japan, but such whaling nationalism is not so popular with other global leaders.

Looking at this issue from the outside, you are most probably mystified by the intrigues of the Japanese LDP, I know I am.

As noted by the Japan Times, ‘Apart from [a few] brief interval[s], the LDP has been in power since it was formed in 1955, and every time it picks a new leader internal factions vie for power’

Observers have noted that nationalism has been a significant political rallying call employed by Abe and others in his inner-circles to enrich their political status.

Even though whale meat consumption in Japan has reduced dramatically, the whale as a political totem remains significant for a few older individuals in the Japanese government and civil service.

In 2016, the BBC reported that Junko Sakuma, a researcher on Japanese whaling, noted that ‘…the answer lies in the fact that Japan's whaling is government-run, a large bureaucracy with research budgets, annual plans, promotions and pensions.

“If the number of staff in a bureaucrat's office decreases while they are in charge, they feel tremendous shame," she says.

“Which means most of the bureaucrats will fight to keep the whaling section in their ministry at all costs. And that is true with the politicians as well. If the issue is closely related to their constituency, they will promise to bring back commercial whaling. It is a way of keeping their seats."’ 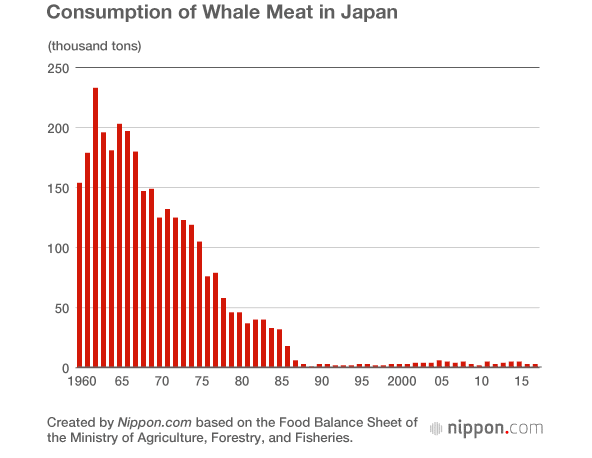 Despite Abe’s support for whaling, consumption of whale meat in Japan declined by almost 99% from 1962 to 2017, when government data shows less than 4,000 tonnes were eaten, equating to the mass of about half an apple per Japanese person.

We have noted before that Prime Minister Shinzo Abe has a close family link with the whaling issue, and Abe’s own parliamentary constituency includes Shimonoseki where Japan has based its so-called ‘scientific whaling’ fleet of factory ships. He has used whaling to ‘evidence’ his leadership capabilities and ability to be a strong and decisive figure, reflecting his commitment to the Japanese concept of kimerareru seiji, or the ‘politics of decision’, in his campaign to counter criticisms that Japan has suffered from weak political leadership in the past.

Furthermore, the head of Abe’s conservative ruling Liberal Democratic Party, Toshihiro Nikai, has the infamous dolphin-killing town of Taiji in his constituency. I’ll leave you to draw your own conclusions.

The domestic power of the whaling block within the Japanese Ministry of Fisheries should also not be underestimated. When it comes to Fisheries Aid, Japanese policy has been that Japan should receive a material or political benefit for any overseas aid that it gives. But work by academics suggests that the Fisheries Ministry, rather than the recipients and the Japanese public, has been the main beneficiary of an aggressive fisheries-related overseas development aid policy, within the context of the Japanese government solidifying its rhetoric around a distinctly nationalistic agenda.

It’s believed that this coalition of nationalistic pro-whaling interests, alongside the US’s signalling that international conventions ‘no longer mattered’ with its withdrawal from the Paris Agreement, led to the domestic political environment in which Abe felt confident enough to lead his government out of the International Whaling Commission (IWC – the body that regulates whale hunts) and Japan’s whaling ships out of the Antarctic (for now). The decision appears to have been a surprise to many of Abe’s cabinet and to the Japanese research scientists who had been involved in the years of so-called ‘research whaling’.

The Japanese government had argued for years that its much-condemned Antarctic whaling was absolutely necessary, but the rebuke of this hunt by the International Court of Justice (ICJ) in 2014 as ‘not being for the purposes of science’, was an unexpected slap in the face.

Faced with such forthright legal and scientific criticism in a forum that they could not manipulate (the Japanese government has long been condemned for its recruitment of supporters within the IWC through financial incentives), the Abe administration sought to avoid such shame again, by withdrawing Japan from the future jurisdiction of the ICJ on all fishery and marine resource issues.

If he cannot win his argument by rational discourse, it seems Abe is not even going to have the debate, or at least not in circumstances in which he thinks he will lose.

Which brings us back to this G20 meeting. Japan will have formally left the IWC on 30 June and is then expected to announce its self-allocated whale-kill-quotas so it can start its new commercial whaling programme from July onwards

So who wins and who loses in the whaling debate? The people of Japan certainly won’t be the winners, and Japan’s international standing will continue to diminish.

Whales will die, and not because people need to eat, and not because culture needs to be preserved, but because a small minority of politicians are willing to spend the equivalent of millions of pounds of Japanese taxpayers’ money to subsidise their political self-interests. As the BBC noted in 2016, ‘…Japan's determination to continue whaling may come down to a handful of MPs from whaling constituencies and a few hundred bureaucrats who don't want to see their budgets cut’.

Japan does not need to hunt whales

Only 2% of the meat consumed in Japan is whale meat.

Up to 95% of Japanese people very rarely or never eat whale meat.

Fin whale meat has been held in long-term storage for up to 20 years!