WDC has a long-running research project studying the dolphins and porpoises who make their homes in or travel through the waters around the Welsh island of Bardsey. Every year we ask for volunteers to join us for a couple of weeks and last year, Janet Jenkins was one of those people.

Janet is a retired geography teacher, living in a relatively isolated area of North Wales. She volunteers with a number of local conservation groups including monitoring red and grey squirrel numbers for Red Squirrels United in the beautiful Clocaenog forest. She says 'I am never happier than when I am anticipating and hoping to observe wildlife and the excitement and thrill when I spot a creature is hard to beat'.

We are accepting applications for this summer and so I invited Janet to tell you a bit about her experience. 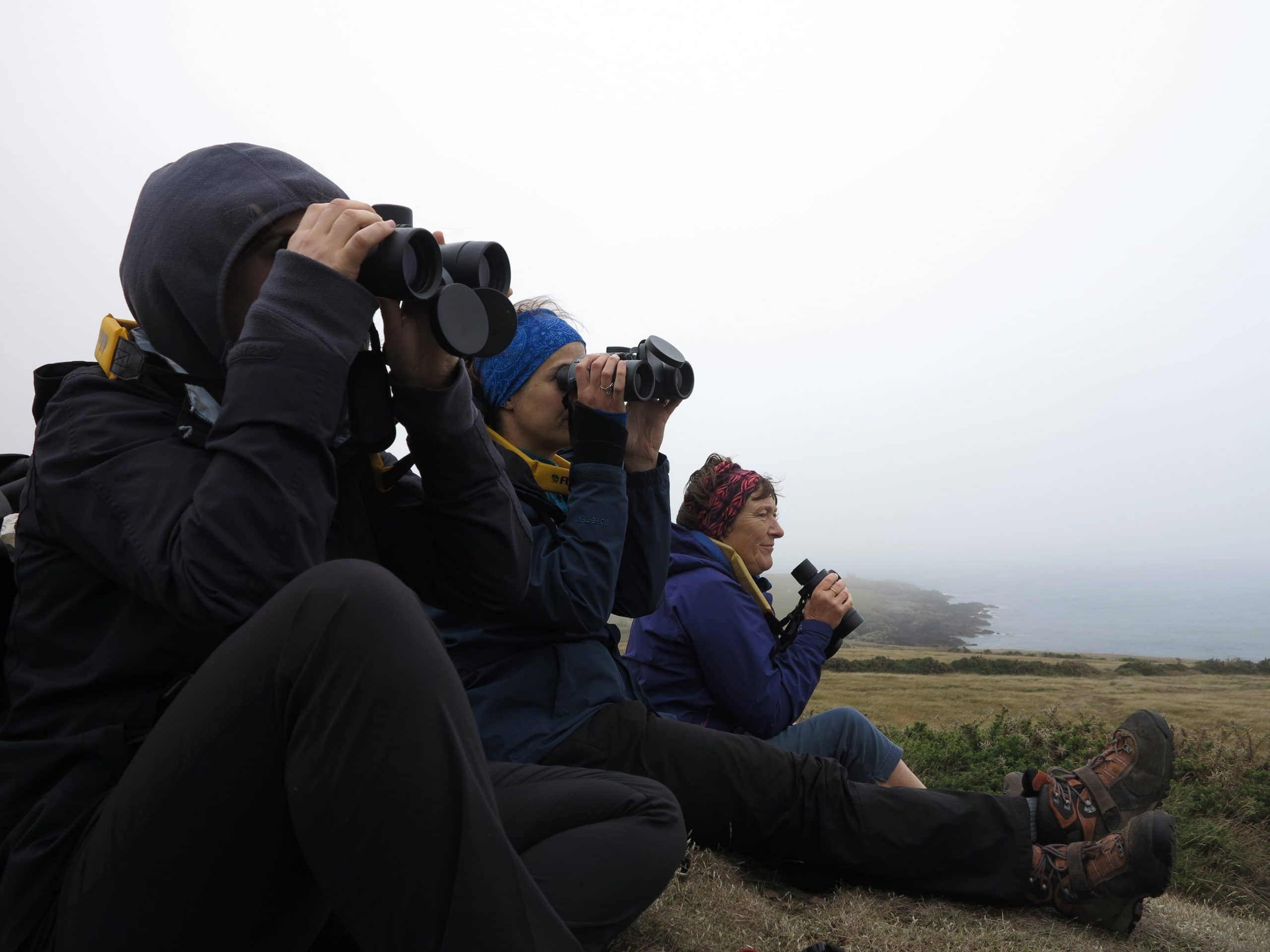 The team on the look-out for dolphins. That's Janet on the right with her binoculars down.

I heard that WDC were looking for volunteers to continue their research project, studying Risso’s dolphins and harbour porpoises from the Welsh island of Bardsey (Ynys Enlli). This, I decided, would have purpose, I’d be part of something large and enduring, it was affordable and in a fantastic location. One problem…..did I have the necessary skills and knowledge? Amazingly my application almost ‘wrote itself’. I think the thrill and wonderment of observing wildlife in the field is something that we communicate if we feel it and what we lack in knowledge we make up for in enthusiasm. At any rate I was accepted.

As the time grew closer my excitement grew and I made preparations to leave, mindful of not taking too much stuff, certainly few toiletries as there would be no shower on Bardsey, but a large tin of homemade cookies seemed like a good idea (and proved to be).

Then, problems arose. Sadly, an elderly close relative died and her funeral was to be on the Friday of my dolphin week. Secondly, uncertainty about boat crossings began due to the uncertain weather forecast. Would we get across on the Saturday at all and, if I went, would I get off for the funeral? The final decision was made by Colin, the boatman, on the Friday evening. We would be going and at an unearthly hour in the morning. No guarantees I would get off the island in time for the funeral but I decided to leave that to chance. (Luck was on my side…just)

So on the Saturday morning we all met up and introductions were made. It was great to meet Vicki and Pine, the WDC staff in charge of the project, and Josella my fellow volunteer. The loading of the equipment for the research work and the mountain of supplies for our two-week stay was done with precision and we were off, over the waves, under a grey sky to Bardsey. 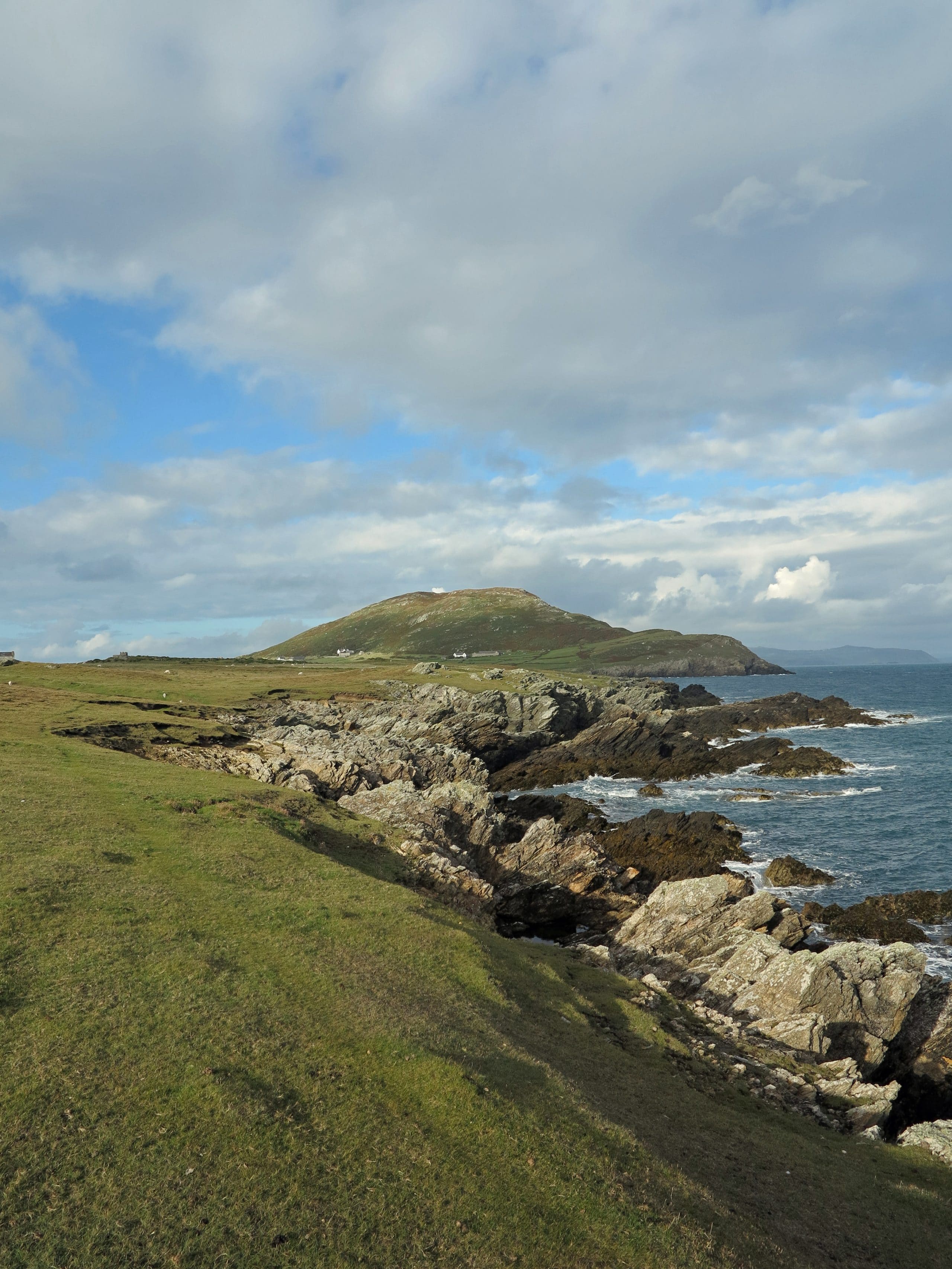 A tractor and trailer met the boat and the Bardsey farmer, who was transporting the luggage up to the Bird Observatory (known as ‘Bird Obs’) where we were staying, greeted Vicki and Pine like old friends. He was called Steve, as were the majority of men on Bardsey it seemed! Hence the need for epithets...Farmer Steve, Steve Obs….The walk to the accommodation was beautiful and the sun came out and talk quickly began of getting cracking with the work in hand. Weather conditions change quickly and often that far west and opportunities were to be grasped. We got ourselves organised and walked north, locating one of the two observation sites on the island, and made ourselves comfortable on the small promontory. Instruction was clear and business-like concerning the correct way to observe and record the location and behaviour of dolphins and porpoises spotted. I must admit that on that first day I felt at a loss, everyone was far more experienced than I and this was compounded when I failed to see the first sighting of a harbour porpoise. Nonetheless, I had already learnt a lot and I resolved to keep at it.

Frustratingly, whilst the next day dawned bright it was also breezy which meant that sea conditions were unsuitable for precise recording but conditions soon improved and we tramped eagerly to our lookout posts. This time I went to the east-facing spot perched high on cliffs with magnificent views right around Cardigan Bay. On this second day, the Risso’s dolphins eluded us once more but the peace, space and light of Bardsey, as we scanned and watched, more than made up for this. Back at base, we learnt that Risso’s had been seen from the south of the island (we were stationed at the north) as well as many bird species, and it was humbling to listen to the incredible knowledge that the staff and visitors had and which many were happy to share with those less informed. 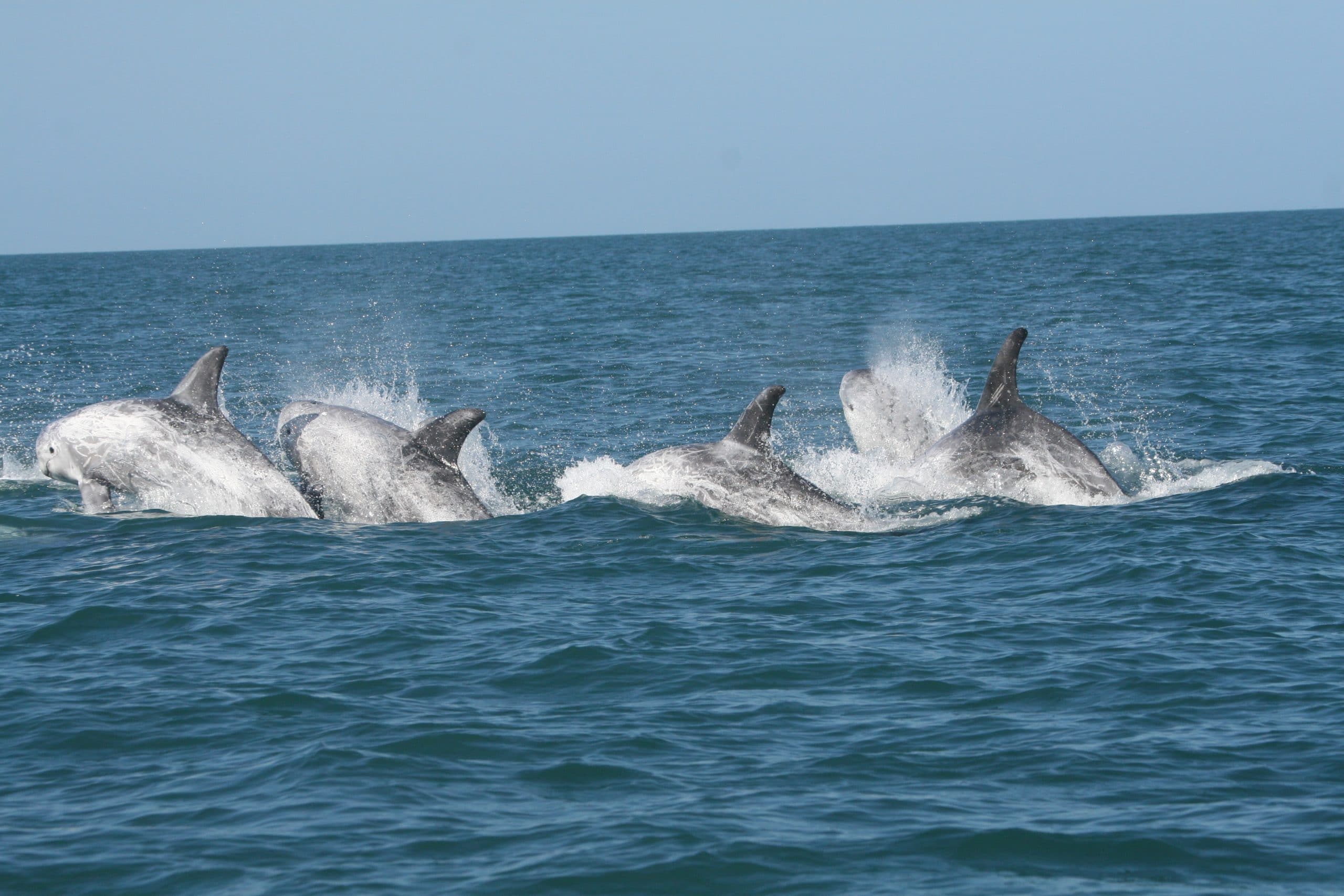 Risso's dolphins in the waters around Bardsey

Monday came. To have a chance of reliable recordings not only do sea conditions have to be very good but also the horizon needs to be sharp. Not once on this day did both these occur together so we had a day of mainly casual observation from the Bird Obs and look-outs which included bird identification too. Our knowledge of island life expanded too as visitors dropped by and discussed change and impending conflict. A proposed tidal power scheme would certainly impact the dolphin and porpoise populations but would bring economic benefits to Llyn and Bardsey some thought. The afternoon brought an opportunity to join a ringing session of Manx Shearwater chicks, the last of which were about to fledge. This was incredible and a talk that evening by Steve Obs so informative too.

After 4 pm, when the ‘work’ was done, I wandered around Bardsey getting to know the lie of the land. How special the place is, is beyond my power to describe. Visit yourself! Listen to the seal colony, tramp over the mountain, bump into the occasional visitor or resident who may share a gem of wisdom with you, and look back at the magnificent Llyn peninsula too where the 2019 survey will base its research into the Risso's dolphin and harbour porpoise. 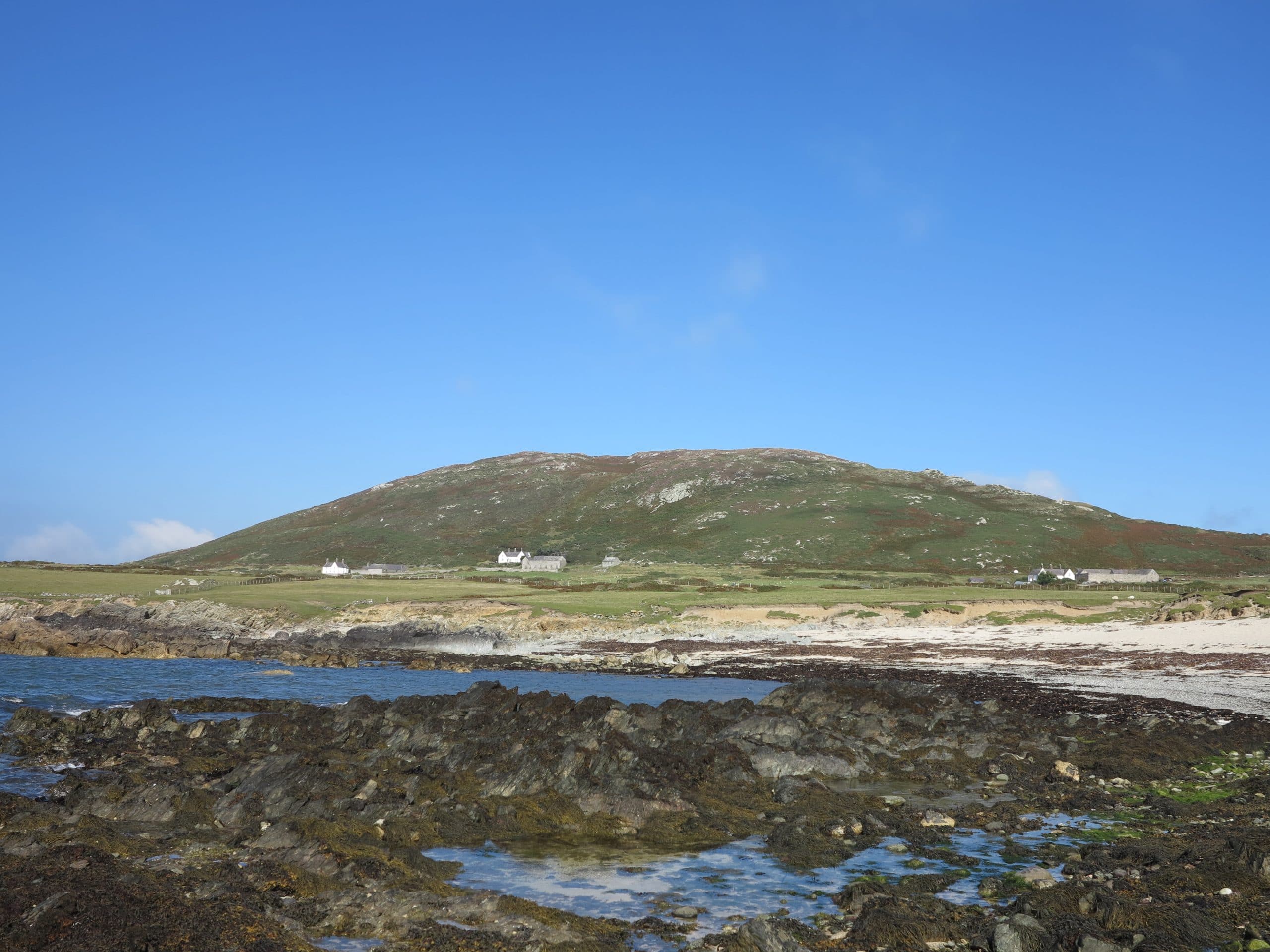 Bardsey Island is an enchanting place

My final day was incredibly windy, but bright, sunny and warm. Casual observation commenced and Risso’s dolphins were spotted close in! Vicki and Pine decided to ask for the boat to be launched and so we gathered the necessary equipment, excitement causing me to fumble and faff, before heading for the harbour. A delay with the boat meant that by the time we were at sea the Risso’s had disappeared but the trip around the island, sometimes right below the cliffs, was magical. We returned to the harbour after an hour and a half and…..what do you know? THERE THEY WERE! A large pod of Risso’s dolphins arcing their way from west to east to the south of the island, unbelievably beautiful as they sliced through the rough seas.

Wednesday…I had to leave. Sea conditions were just about OK, for the trip (if I’d stayed any longer I would not have left until Saturday as it turned out). The magic continued that morning as I watched the contents of the moth trap be identified and recorded. Then, after farewells and thanks, I made my way to the harbour. I left with other folk, racing the deteriorating weather, and two goats leaving for the mainland where their humans would join them in a few weeks as they left the island after more than 10 years running the farm. I couldn’t guess how they would feel, leaving. I felt sad enough but also renewed and refreshed. Inspired too - both whale and dolphin-wise - I’m up in the north west of Scotland right now for Orca Watch Week run by the Sea Watch Foundation in partnership with WDC, and personally too with an assortment of family and friends and dogs I am slowly, a day at a time, returning to Ynys Enlli on the North Wales Pilgrims Way and plan to make it by May 2020, two years after I first decided to join WDC for their wonderful research project.

Want to join us this year?

You'll find an application form plus everything you need to know on our website.

join us on bardsey