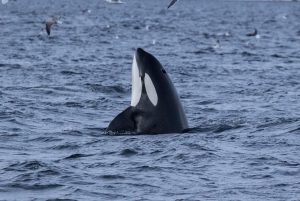 New research from scientists in the US has revealed that great white sharks will leave their feeding grounds to avoid contact with orcas (killer whales).

While this avoidance behaviour had been observed on individual occasions, this is the first time it has been studied over a long period of time to see if it was a regular occurrence.

Much of the data comes from studies of great white sharks in the Greater Farallones National Marine Sanctuary off the coast of California. The sharks visit the waters around the island to hunt young elephant seals.

However, occasionally transient orcas will also turn up and when this happens, the sharks leave the area until the following season. As a result, attacks on the elephant seals drops off during these events.

Even though the seals are a potential prey for the orcas, the sharks can be a target too despite being over five metres in length. In 1997, two orcas attacked and killed a young shark in the area, while more recently, at least five great whites were hunted by orcas off the coast of South Africa. The liver of a shark is full of calories so is a rich source of energy for the whales.

Posted in News and tagged Orca