Japan’s highly controversial whaling season in the Antarctic has begun again with hunting vessels leaving the western Japanese port of Shimonoseki today. Their mission is to slaughter up to 333 minke whales through until March 2019 for research.

This will be the fourth such hunt since 2015 and will take place despite their scientific value being called into question by the scientific committee of the body that regulates whale hunts (IWC – International Whaling Commission) and heavily criticised by the International Union for Conservation of Nature (IUCN) – the global authority on the status of the natural world. 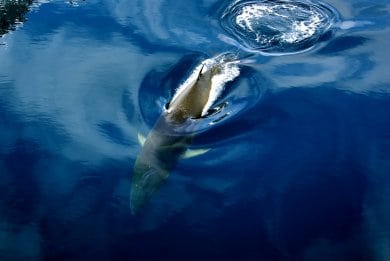 Japan temporarily suspended research whaling after the International Court of Justice ruled in 2014 that the whaling programme was “not for purposes of scientific research” and ordered its suspension.

Japan has been catching whales in the region for “scientific research” since 1987 despite the fact that most of the meat ends up on sale for commercial profit.

After leaving port, the 724-ton Yushin Maru and the 742-ton Yushin Maru No. 3 vessels will join three others including the 8,145-ton mother ship, Nisshin Maru before heading for the far south.

The annual hunts will start just weeks after Japan’s import and sale of sei whales products from its equally controversial scientific whaling programme in the North Pacific was deemed as illegal by the global body entrusted with protecting endangered species from trade – the Convention on International Trade in Endangered Species of Wild Fauna and Flora (CITES).

WDC has been campaigning recently to stop the European Union agreeing a new free trade deal with Japan unless the slaughter of whales stops. The EU Parliament will vote whether to agree to a new deal in December and, following WDC’s campaign to raise awareness of the issue within the EU, a number of political groups have said they will not consent to the agreement, and many MEPs have individually raised Japan´s whaling as a big concern.