We were happy to host Zoology student, Grace Long for a two week placement at our UK headquarters, in March. Grace is a student at the University of Exeter and she’s keen to get into whale and dolphin research and conservation. She joined our End Captivity team during her time with us and took on an important piece of work, investigating the life span of bottlenose dolphins in captivity. Using information from the Ceta-Base website, Grace analysed data from 67 facilities that hold or have held bottlenose dolphins in captivity. The majority of the facilities she looked at are in the United States and Europe. She used all available data on the Ceta-Base website for the length of time bottlenose dolphins, now dead, had lived in captivity, over a period of 79 years from 23/12/1939 to 21/03/2018. Here Grace explains what she did with the study and presents a summary of her findings.

A brief summary of what I found out:

If you are able to make a donation, you could help us end the cruelty of captivity.

Yes, I'll donate today
My aim was to find out how long dolphins live in captivity. I needed to calculate a figure for the average amount of time bottlenose dolphins have survived in a captive facility, and it was a challenge I was eager to rise to. I used data available on the Ceta-Base website for dolphins who had died in captivity. I excluded any individuals for whom there was no exact birth or death date and also dolphins born in captivity who survived less than one year, as calf mortality is generally high for this species. I took all this information and calculated a mean average survival time and then used standard statistical tests to work out the significance of my results.

What did I discover?

I found that the average survival time in captivity for all individuals who survived more than one year is 12 years, 9 months and 8 days. When I split the data into those born in captivity and those who were captured from the wild, the average survival time of those born in captivity was significantly lower than those who had been born in the wild. Captive-born dolphins are living just 9 years and 22 days, compared to 14 years, 9 months and 20 days survival for those taken from the sea. It’s hard to know why this might be without speculating, but perhaps those first few years in the wild when dolphins are in more natural social groups in a natural environment might help them survive for longer periods in captivity, despite the stress of capture and confinement. 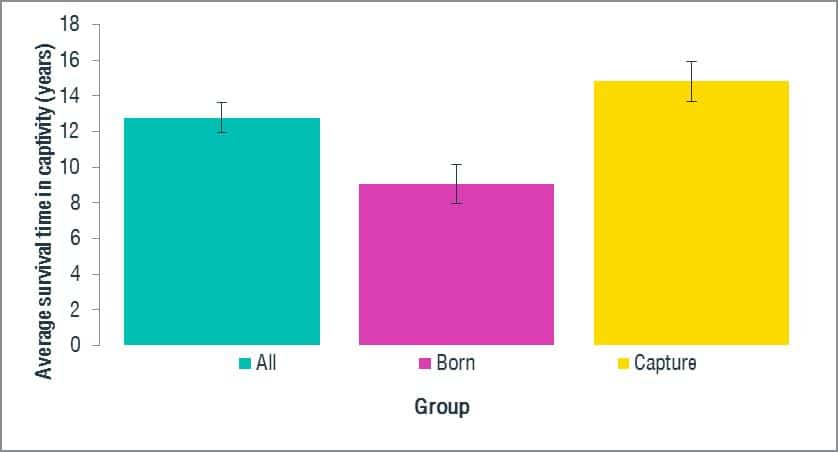 In the wild, bottlenose dolphins generally live between 30 and 50 years.  We knew that a life in a tank can never replicate the quality of life that dolphins enjoy in their natural homes and this was borne out by my findings. Bottlenose dolphins in captivity only survive to an average of 12 years, 9 months and 8 days – this is appallingly low compared to their life expectancy in the wild.

I wanted to test the suggestion that wild dolphins live longer, so I calculated the percentage of individuals who survived past certain ages, both from Ceta-Base and from the well-studied wild Sarasota bottlenose dolphin population in Florida recorded in 1993. Shockingly, only 13.54% of captive born dolphins survived past 10 years old, especially when compared to 60.87% in the wild Florida population. Even more upsetting was my discovery that less than 1% of the captive-born dolphins survived past 30, compared to 21.74% of the wild dolphins.

I’d read that the death-rate for calves is higher in captivity than in the wild and I wanted to see if the data supported that claim. I found that 52.26% of bottlenose dolphins born alive in captivity do not survive past one year. In the wild, you’d expect calf mortality to be more in the region of 17% or less. Even among wild populations in Doubtful Sound, New Zealand and in Adelaide, Australia where calf survival rates are low, respectively, only 33% and 30% of calves died in the first year.

Although only a desk-based study of data available over many decades, Grace’s findings demonstrate that captivity presents a significant risk to the health, welfare and ultimate ability to survive for bottlenose dolphins, supporting WDC’s concerns about the impact of captivity on these intelligent, social and far-roaming creatures. Even in populations suffering declines in the wild, individuals fare better than their counterparts in captivity. We need more studies to determine an average survival rate in captivity for bottlenose dolphins the world over, as Grace’s investigation focussed primarily on the US and Europe, but we suspect these figures may be the tip of the iceberg and in places such as China and the Caribbean, where dolphin captivity continues to grow, fuelled by captures from the wild, survival rates may be even lower.

Whales and dolphins simply shouldn’t be in captivity, and Grace’s research adds even more evidence to the pile to support that statement. While they are alive, captive dolphins suffer an impoverished existence which is bad for their mental and physical health, and captivity kills them early – just so humans can be entertained. Things are definitely changing, but too slowly. Despite all the awareness and controversy, people still flock to these cruel, exploitative attractions in their millions. We need the world to wake up fast before too many more dolphins suffer and die.

WDC is leading the way to help develop sanctuaries for captive whales and dolphins. In 2020, the first beluga whale sanctuary welcomed Little White and Little Grey.

If you are able to help, every gift, whether large or small, will help us end captivity for good.