Will 2018 be the year that I can finally visit beautiful Iceland purely as a tourist, rather than a campaigner? Maybe it’s not surprising that this fabled ‘land of fire and ice’ should offer visitors a host of contradictions, but the juxtaposition of whale watching and whale hunting in the same waters is surely one of the most logic-defying examples on the planet? Frankly, to me, it feels just plain surreal – not to mention heartbreaking – to be bobbing about on a whale watch boat one day and the next, to stand behind the chain-link fence marking the boundary of the processing station at Hvalfjörður and watch a beautiful fin whale being chopped up only metres away.

So, as another year turns, I thought it would be interesting to look at recent events and try to predict what 2018 may hold for whales and dolphins off Iceland. I’m an optimist, so let’s consider the good portents first.

No fin whales killed
Last year, as in 2016, no endangered fin whales were hunted.  Ironically, we can mostly thank a highly public spat between Japan and Iceland’s sole fin whaler, Kristján Loftsson, for sparing the lives of over 300 fin whales over those two years. Japan is pretty much Mr Loftsson’s only market, so a fall-out with Japan over what he considers their overly-tough food testing laws (combined with a strong Icelandic krona last year) meant that his whaling vessels remained in dry dock.

Record tourist numbers – but they’re watching whales, rather than eating them
Chief minke whaler, Gunnar Bergmann Jónsson, continually states that whales must be killed in order to meet growing tourist demand. However,  whilst it is true that tourist numbers are rising steadily – with almost 2.2 million people visiting Iceland in 2017, more than six times the Icelandic population – it is also true that a major outreach campaign by WDC and other NGOs has succeeded in substantially reducing the percentage of tourists willing to sample whale meat. In fact, our message thattourist demand is largely driving the hunts – under the mistaken belief that whale meat is a popular and traditional local dish –  has seen the percentage of tourists eating whale meat plummet from 40% in 2009, to 12% by 2016 (Gallup poll, commissioned by the International Fund for Animal Welfare).

Iceland’s new prime minister is an environmentalist
Appointed in late November, Katrín Jakobsdóttir, leader of the Left-Greens, has formed a coalition government with the right-wing Independence Party and the centre-right Progressive party. The Left-Greens will head the Environment Ministry and, whilst it would be naïve to claim that a change of government will definitely bring about an end to whaling (after all, whaling took place under the previous Social Democrat/Left Green coalition), Katrin is an environmentalist and her party will head the Environment Ministry.  She’s also widely regarded asone of the most popular and trusted politicians in Iceland, able to unite the left and right wings of the electorate. Crucially too, she has recently tabled probing questions in parliament about whaling.

Katrin will be mindful of greater awareness amongst the electorate that whaling doesn’t deliver economically and is an albatross around Iceland’s neck in terms of its reputation on the world stage. By contrast, whale watch tourism is booming: one in five tourists currently takes a trip – equating to more whale watchers than Iceland’s population – meaning that live whales are indisputably worth far more than dead ones. 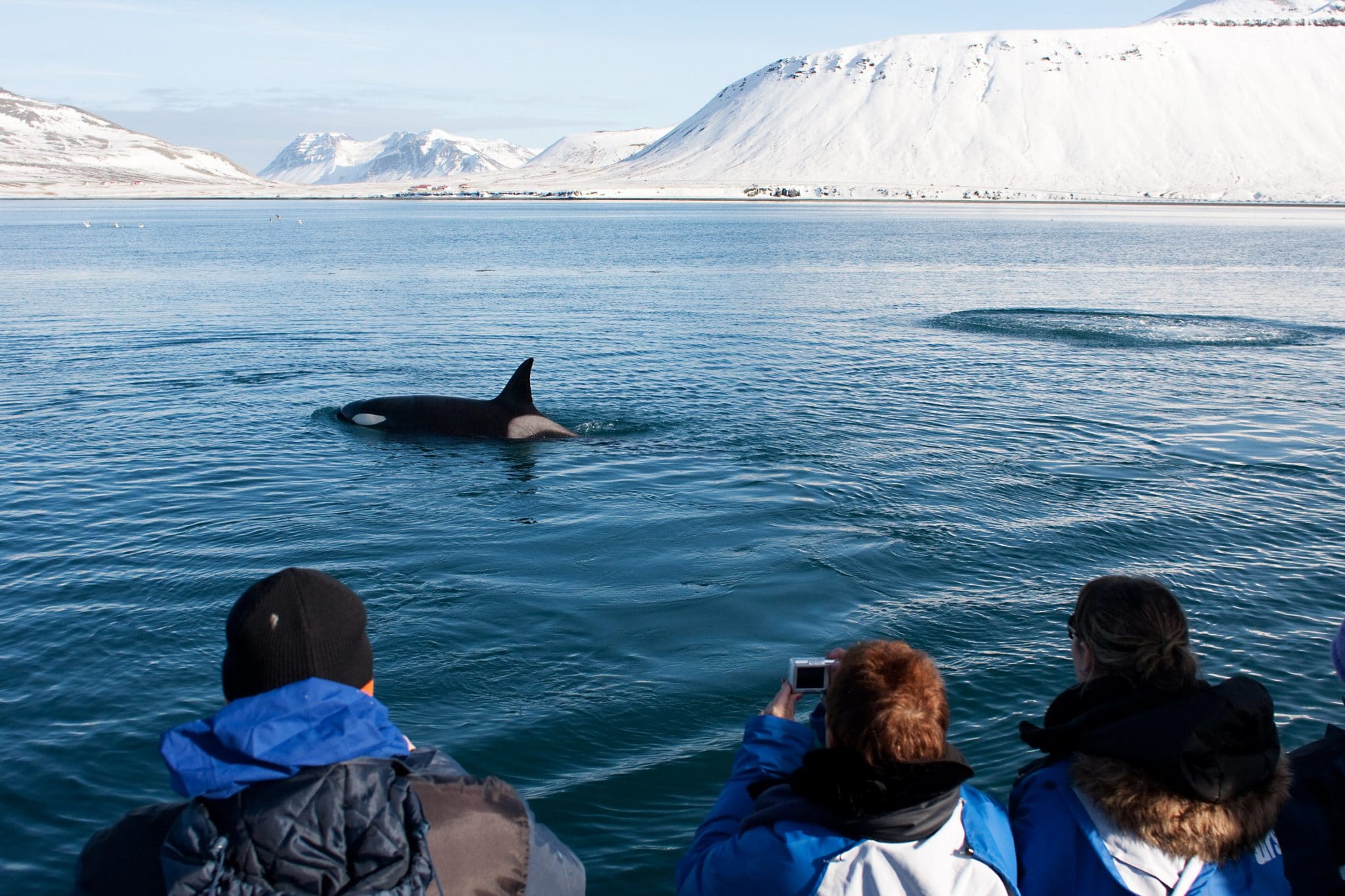 Extension of the Faxafloi Bay whale sanctuary
In one of her final acts in office, Iceland’s outgoing Minister of Fisheries and Agriculture, Þorgerður Katrín Gunnarsdóttir, signed a regulation enlarging the whale sanctuary in Faxaflói Bay, restoring it to its previous size (before it was reduced in size in 2013 by her pro-whaling predecessor, Sigurður Ingi Jóhannsson).  Faxafloi Bay, just outside Reykjavik and one of the most popular whale watch locations, is also the area where hundreds of minke whales have been killed in recent years. She also designated the waters off Skjálfandi bay off North Iceland a whale sanctuary. My hope of course – and fortunately all the signs are positive so far – is that these sanctuaries will be retained, if not increased, under the current government.

But, as always in life, along with those heartening moves, there’s sobering things to report too, including:

Past experience tells us never to celebrate too soon
Fin whaling has paused in the past, as it did in 2011 and 2012, only to resume in 2013, so it is important to wait for further news before we know for sure what will happen this year. Confirmation of whether the hunt will proceed usually comes in early spring (it was March last year) so there is certainly no room for complacency at this stage. Fin whaler Loftsson routinely plays a game of cat and mouse with opponents and generally there’s a lot of sabre-rattling before any formal announcement is issued.

Loftsson’s freezers are empty – will he refill them?
Last year, and the year before, Mr Loftsson shipped ‘old’ fin whale meat from the 2015 hunt – which saw a record 155 fin whales killed – to Japan aboard a cargo vessel, the Winter Bay.  These shipments mean that firstly, he has some confidence that his meat still finds a market in Japan and secondly, his freezers are now empty. Whether this is a sign that he will resume the fin whale hunts, or has stopped whaling for the time being at least, remains to be seen. I don’t want to tempt fate, or trigger a knee-jerk response from a whaler who is notorious for enjoying winding up the conservation community, but my hope is that now, in his mid-seventies and with declining demand for whale meat globally, Mr Loftsson will concentrate on the other businesses in his ‘empire’, including seafood giant, HB Grandi.  Long-term supporters will know of WDC’s successful campaign, alongside other NGOs, to alert major supermarkets and consumers to the strong links between HB Grandi and fin whaling: a campaign which has certainly damaged HB Grandi both financially and reputationally. We’re also working hard to close EU ports to whale meat transits. Our campaign has already forced Loftsson to use costlier and more circuitous routes, rendering his activities less profitable.

Huge appetite for ‘exotic’ and gourmet dining experiences
Friends in Iceland have warned that the ongoing popularity of Iceland as a destination for gourmets and those seeking to sample unusual or ‘exotic’ foods poses both a threat and a challenge. Whilst tourists are increasingly aware that, by eating whale, they are helping to perpetuate whaling, there nonetheless remains a strong ‘foodie’ culture in Reykjavik particularly and the appetite for ‘gourmet delicacies’ continues unabated. As tourists come to Iceland in ever-increasing numbers, WDC is working with other NGOs to get the message out as widely as possible.

The new Fisheries Minister is pro-whaling
The new fisheries minister, Kristján Þór Júlíusson, supported a dramatic increase in the whaling quotas back in 2009. We need to keep a watchful eye, as he will be responsible for renewing or amending future quotas.

So, it’s a mixed bag and certainly we need to be alert and keep up the pressure, not only in terms of reaching tourists and informing consumers about the links between fin whaling and HB Grandi seafood, but also in terms of getting the message across at the upcoming meeting of the International Whaling Commission, the body that regulates whaling, that commercial whaling in Iceland, as elsewhere, must STOP!

Cautious optimism? Yes, but maybe cynical optimism is, for now, the better term. Watch this space!

If you are visiting Iceland, please check out our partner, Alpha Insurance when you book your travel insurance – they give a discount to all WDC supporters.

Please consider making a donation to help us continue our efforts to stop the slaughter once and for all.