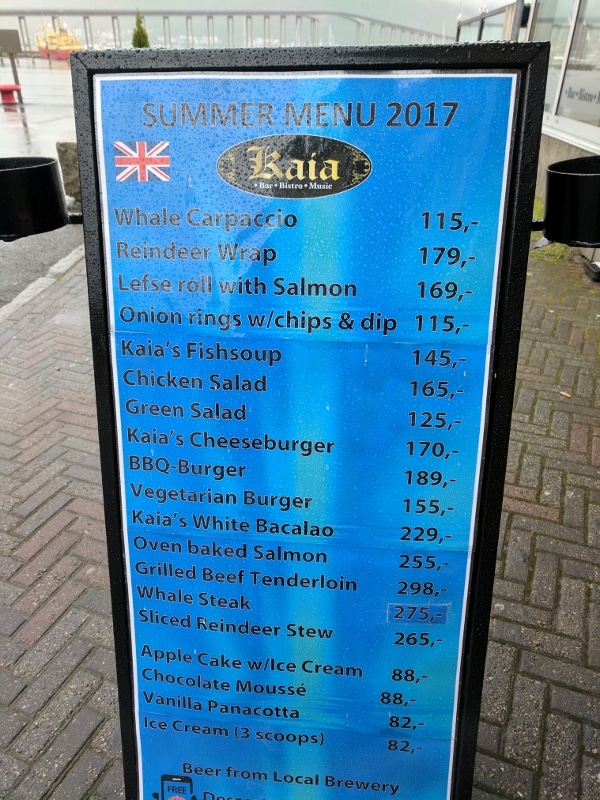 I often wonder why so many tourists remember to pack their toothbrushes but leave their values behind on the kitchen table? I’m just back from a trip to Tromsø  in northern Norway, where I was reminded, once again, of that strange phenomenon: the tourist who sports a ‘Save the whale’ teeshirt down the local pub, but is apparently quite happy to order whale steak from a restaurant menu when abroad. Wandering around Tromsø, it’s easy to be struck by the number of venues boasting whale for sale. As if killing whales – when most of the rest of the world respects the international ban – was not enough, it felt doubly insulting to see Norwegian minke whale carpaccio feature on one harbourside menu at 115 NOK (around £11), the same price as onion rings and chips – and cheaper than a green salad! Can the life of a beautiful, sentient creature really be valued so cheaply?

It could be that many tourists have yet to realise that, by purchasing whale products, they are merely helping to perpetuate an industry that would otherwise have died by now. But that is the plain truth – despite government subsidies and massive marketing campaigns, whale meat in Norway is mostly eaten by the elderly and by visitors. In Iceland, the truth is starker still: it’s mostly eaten by visitors.

Whalers in both regions have complained of a sparse season and of having great difficulty finding enough whales to kill, with catches well down on last year. Nonetheless, Norway has succeeded in killing 342 minke whales (compared to 452 at the same time last year) according to Råfisklaget, the Norwegian fisheries website. Icelandic whalers, meanwhile, are disgruntled, having killed 17 minke whales, well short of their target of 50, prompting Gunnar Bergmann Jónsson, managing director of IP fishing company, the only company currently whaling in Iceland to declare that they will have to import Norwegian minke whale meat to cater for demand.

However, given that most of the demand comes from tourists, it seems to me that this should not be an impossible nut to crack: if we can just raise sufficient awareness amongst tourists, we can kill demand – rather than whales.

Anyone considering buying whale meat might have further pause for thought at the news of a particularly shocking incident which took place only days ago.  Peaceful campaigners from IMMCS (International Marine Mammal Conservation Society) in Germany were able to film a Norwegian whaling vessel, the Nystrand, kill a minke whale. According to their footage, the whale did not die instantly and probably suffered a great deal, before being finished off by rifle. The whale’s carcass was then ‘bled out’ and its blubber dumped overboard, in full view of a nearby vessel with young children on board. Surely that is enough to kill any appetite for whale meat stone dead?

Our strategy of informing visitors about the role that tourists play in perpetuating the hunts has been working well for some years, in Iceland especially. WDC, along with other NGOs, has steadily promoted Iceland as a venue to visit to enjoy watching live whales: period. Tourist demand for whale meat has dropped from 40% in 2009, to a mere 12% last year. But with ever-increasing tourist numbers, it’s important to keep up the momentum going, so if you know anyone travelling to a whaling region, please show them our flyers or check out whale-friendly restaurants here.

Further cause for optimism comes from perhaps unexpected quarters – the Icelandic Minister of Fisheries and Agriculture, Thorgerður Katrín Gunnarsdóttir has already stated firmly that ‘it’s fairly clear in the long run that we are not going to live with this [whaling] policy forever and ever’ and yesterday, she visited a peaceful protest by Hard to Port, a German NGO  where she acknowledged that “I partly agree with what you do”. This is an unprecedented statement from an Icelandic minister, let alone a Fisheries Minister with responsibility for setting whaling quotas and is, therefore, much welcomed.

Even BREXIT should provide some valuable leverage, since the UK will need to negotiate new fisheries deals with Iceland, Norway and other whaling regions. This presents a golden opportunity to really push these countries hard on their whaling activities, given that the UK is such an important market for their fish.  UK Environment Minister, Michael Gove, also happened to pass the Hard to Port banners yesterday, whereupon a staff member was heard to say that “whaling is always on the agenda”.

Please support our work to ensure that whaling STAYS on the agenda!