Recently, Norway announced that the entrance to the Global Seed Vault in the Arctic was flooded after very high temperatures caused the permafrost to melt.

The vault, a storage facility deep inside a mountain on the Arctic archipelago of Svalbard, is designed to preserve the world’s crops from future disasters. The store holds seeds from c.5,000 crop species from around the world. Dried and frozen, it is believed they can be preserved for hundreds of years.

The Norwegian government could take a significant step to mitigate climate change – and therefore protect the seed vault – by stopping whaling. It sounds strange, I know, but scientific studies are showing how important whales are in combatting climate change.

The contribution made by trees in removing carbon dioxide from the atmosphere and producing oxygen is widely recognised; however, less well known is the fact that our oceans are by far the largest carbon sink, absorbing 25% of carbon dioxide.

In the ocean, the ‘plants’ that remove carbon dioxide and produce oxygen are microscopic phytoplankton producing at least half of the world’s oxygen. Just as in land-based plants, they need carbon dioxide, sunlight and nutrients. This is where the whales come in!

Phytoplankton live in the sunlit surface waters, which provides them with an essential light source (the sun), but nutrients in the ocean don’t remain free-floating, instead, they sink back to the sea floor where they can’t be recycled back into the water column. Whales feed at depth and return to the surface to breathe, which is also where they defecate. Through this ‘whale pump’, the whales release huge amounts of nutrients at the surface of the water. 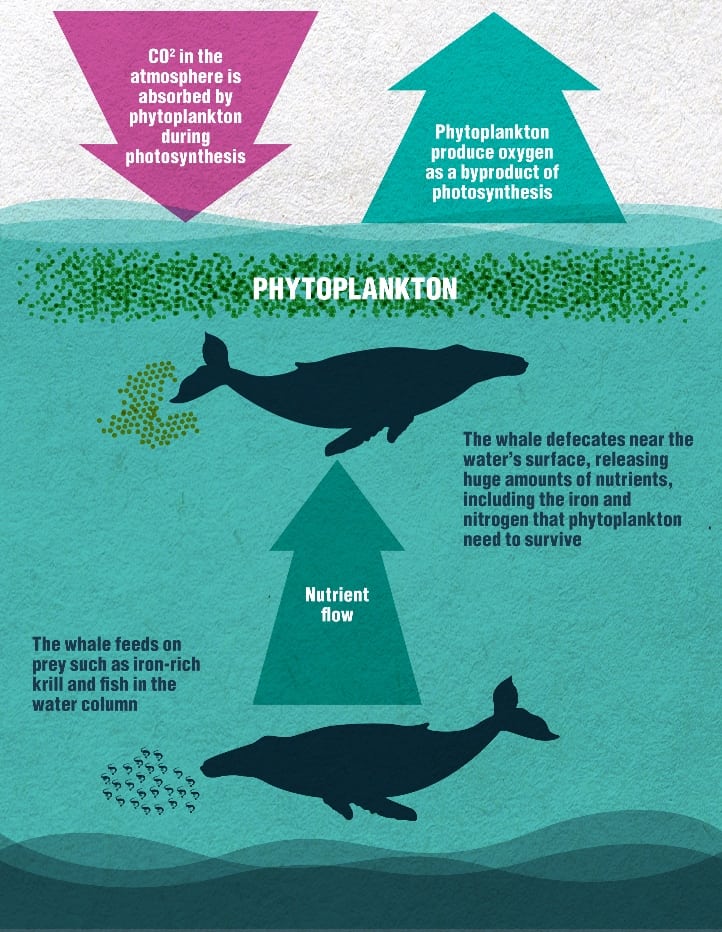 Whale poo is rich in nutrients, including iron and nitrogen, that phytoplankton need to survive. Because whales migrate across oceans, travelling thousands of miles to feed and give birth, they create a mass transit system for nutrients across oceans.

Norway has increased its  quota for minke whales this year, allowing 999 whales to be killed during  the 2017 season. However, as the majority of the minke whales killed by Norwegian whaling vessels are females, many of which are pregnant, the whalers endanger the next generation of whales.

If Norwegian whalers  were to stop their whaling programme, they would be helping to make a significant contribution to mitigating climate change, as well as protecting whales and dolphins.