In the first few days of 2016 came the depressing news that a female orca had been found washed ashore dead on the Hebridean island of Tiree off the west coast of Scotland. She was identified as Lulu, a member of the dwindling West Coast Community orca pod.

Her death must have been excruciating as she was entangled in fishing rope which prevented her from swimming, ultimately causing her to suffocate.

The West Coast Community now numbers just eight individuals – four males and four females – with no calves having been observed in the pod in over 20 years.

Whilst the UK gets seasonal orca visitors from Iceland and Norway to its northern shores, the West Coast Community are considered the UK’s only resident pod. As their name suggests, they are most often seen off the west coast of Scotland but are also known to roam a much bigger area to the west of the British Isles, from the southern Irish Sea and west along the entire length of Ireland’s Atlantic seaboard.

Scientists currently identify two forms or ‘ecotypes’ of orcas in the North Atlantic: Type 1 are mainly fish eaters while Type 2  – which includes the West Coast Community – are specialist feeders which prey exclusively on other marine mammals such as porpoises, dolphins, whales and seals. 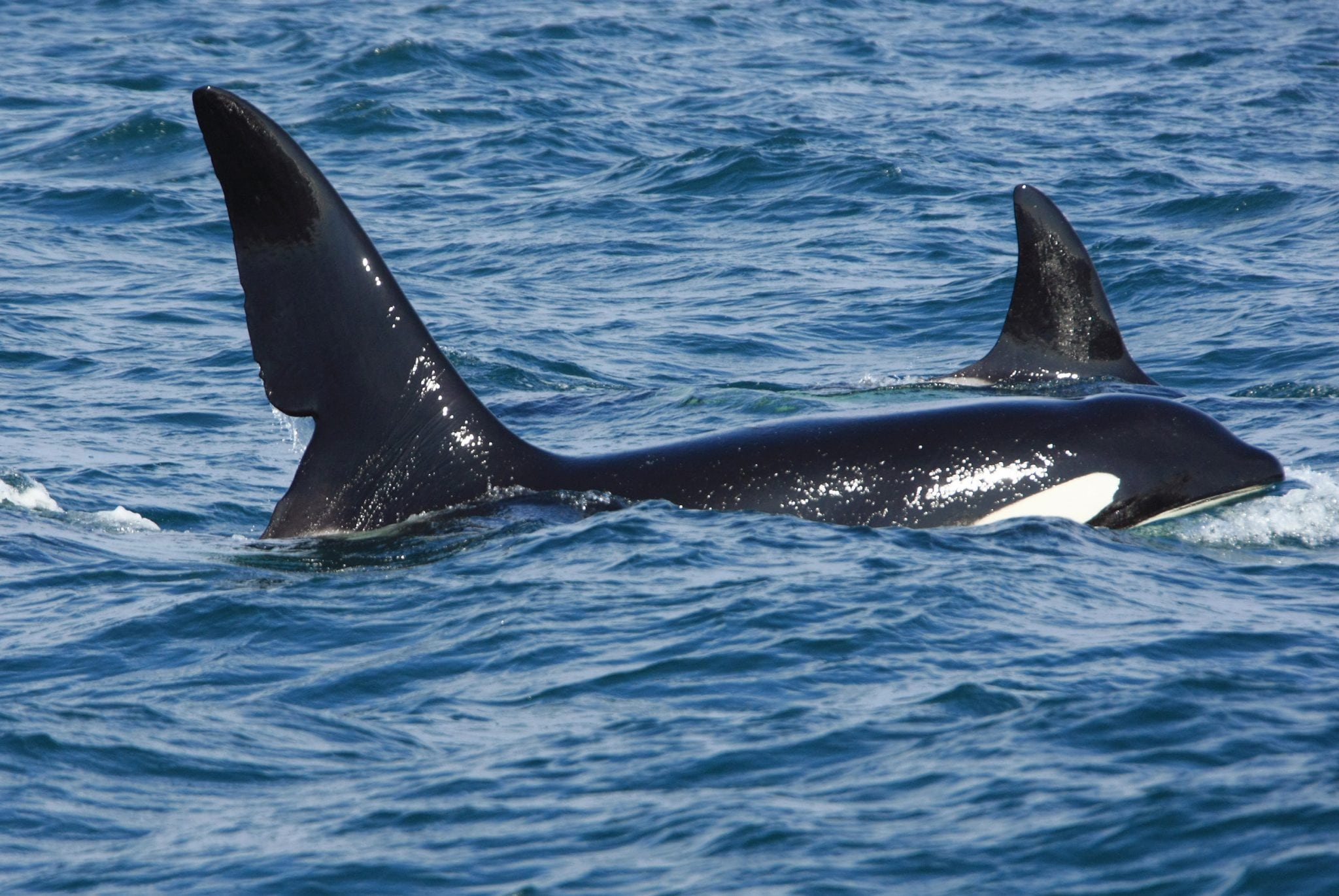 This resident population also seems to have different physical characteristics from orcas elsewhere in the North Atlantic, including larger overall size and different dentition (makeup of their teeth). This indicates separate ancestry and there is evidence that the group’s closest relatives are found thousands of kilometres away in the Antarctic.

Researchers have known for some time that western European waters are a global hotspot for PCB (polychlorinated biphenyl) pollution. These toxic chemicals, banned in Europe in the 1980s, are extremely persistent (they were designed not to break down by heat or chemical attack) and continue to leak in to the oceans with a devastating effect on marine wildlife. High levels of PCBs are important chemical markers and are known to harm breeding success and suppress the immune system of whales and dolphins.

The levels of PCBs in some species of Europe’s whales and dolphins are as high in females as they are in males. This is particularly alarming as females are usually able to offload toxins to their calves through their milk which is high in fat.

The ocean is downstream from everything and much more still needs to be done to ensure that PCBs currently in landfill sites are locked-in and secured so they can’t leak out into streams, rivers and estuaries.

Lulu’s body gave scientists a valuable opportunity to assess what role pollutants are playing in the demise of her pod. Research and conservation organisations alike have been patiently waiting (and dreading!) the results of her post mortem. Today’s announcement makes for devastating reading and the chances of survival for the remaining members of the pod are slim. Extinction is now a very real threat for this particular iconic community of orcas.

“The levels of PCB contamination in Lulu were incredibly high, surprisingly so. They were 20 times higher than the safe level that we would expect for cetaceans to be able to manage. That puts her as one of the most contaminated animals on the planet in terms of PCB burden, and does raise serious questions for the long-term survivability of this group (of UK killer whales).”

Rob Lott, WDC’s Policy Manager says: “This report is a wake up call and we must ask ourselves how much we value our oceans and the majestic creatures that call it home. We have a duty to future generations to now fully implement meaningful conservation measures to make sure the tragic story of Lulu and her family is a turning point in our attitude and understanding towards the marine environment and not seen as an inevitable historical footnote.”

The UK has a well-established strandings network–any stranding should be reported HERE.

Looking for additional ways to support us?  Adopt an orca for monthly updates and news about orcas of the Northwest, subscribe to our blogs and enewsletters, make a donation, or support WDC while you shop!