Travel industry giant, Thomas Cook has announced that it is dropping tours to some captive dolphin theme parks in the wake of growing public feeling against the use of whales and dolphins for entertainment.

As a result, Thomas Cook has dropped 11 such facilities and will no longer sell tickets to them. The move by Thomas Cook is a major success for WDC’s campaign to stop travel firms selling tickets to these parks and it is great news that Thomas Cook appears to be taking this issue seriously.

Recently, WDC has seen the campaign gather momentum. Just last month Virgin Holidays announced that it wouldn’t be signing up any new attractions that feature captive whales and dolphins for theatrical shows, ‘swim-with’ programmes or other entertainment purposes.  Virgin have pledged support for the creation of coastal sanctuaries for ex-captive whales and dolphins similar to the one WDC is currently looking to establish.

However, there are those travel companies who are not listening. When we took our 304,000-strong public petition calling on British Airways to end its association with SeaWorld to the company’s UK headquarters, we didn’t get beyond the security gate.

Sadly, despite the change in direction by the likes of Thomas Cook, Trip Advisor, Virgin and others, British Airways continues to sell tickets to tourists to marine parks such as SeaWorld. These offers are advertised by BA in the face of overwhelming peer-reviewed evidence that WDC has presented to them highlighting the fact that whales and dolphins live shorter, impoverished, stressful lives in tanks.

Most orcas in captivity today die in their late teens and early twenties with only a handful making it past 30. SeaWorld and many other facilities continue to flout many of the animal welfare guidelines that travel association, ABTA compiled in 2013. In captivity whales and dolphins are held in stark, artificial tanks with no natural stimulation in which environment it is impossible for these complex, highly intelligent, social creatures to exhibit natural behaviour and where they have no means of escape from one another or their trainers or the viewing public. As such, if any facility were to fully comply with this ABTA guidance then it would/should not be holding whales and dolphins in captivity. 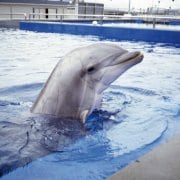