Once IWC is over and everyone is back home at their desks, something like the post conference blues sets in. The adrenalin rush of ten days packed with talks, negotiations, lobbying functions and votes is over and it’s time to take stock and look at the results. 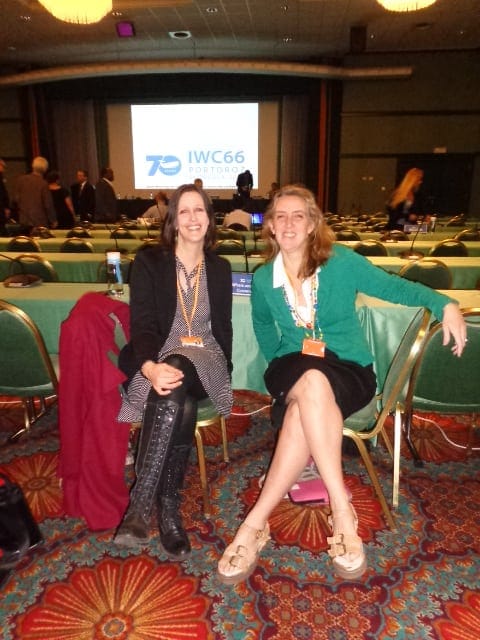 Last week, on the final day of the meeting, after the final session had closed and long goodbyes were said – some with very dear colleagues we most probably won’t see again for the next two years – and before Caro had to get onto the shuttle to take her to Venice for the first part of her long journey back to Buenos Aires, we talked about what had transpired over the last week and whether we felt we were satisfied with the results and felt we had reached our goals.

The failure to reach the required majority for the South Atlantic Whale Sanctuary was definitely a low  start for the meeting. Side by side with our colleagues from many other NGOs we had tried our best to get as many countries on board as possible. The disappointing result was not completely unexpected and – more than anything –is a final wake up call to whale loving nations to step up their game to try to match Japan’s efforts when it comes to gaining support from “undecided” nations. For the Japanese government, whaling politics are a top priority and they don’t shy away from spending a lot of money to further their strategy to bring back commercial whaling. The same level of importance should be given to the issue by the conservation-minded IWC members to keep Japan in check.

The adoption of Australia’s and New Zealand’s proposal to give the IWC better control over so called “Special Permit” or “Research” whaling was a very positive step forward. The question that remains is will it will be successful in reaching its goal to keep Japan from heading back to the Antarctic again before the IWC has had the chance to properly review Japan’s whaling plans? Shortly after the vote, Japan’s IWC Commissioner, Joji Morishita, said to the press, “we will abide by the convention itself,” which is diplomat speak for “we will carry on regardless”. The problem is that apart from the fact that the resolution is non-binding, the IWC doesn’t have any teeth, meaning there are no possibilities to penalise Japan under the convention. It is definately a step in the right direction, but what we need now is for pro-whale IWC members to show some assertive action when it comes to Japan. Exerting economic and sustained political pressure are possibilities, and for example, the current EU-Japan free trade negotiations come to mind and we are campaigning hard to stop the EU making this trade deal while Japan still hunts whales.

We were relieved that new rules for the governance of Aboriginal Subsistence Whaling – or ASW – were not adopted but decisions were deferred to the intersessional period in the run up to the next meeting. This gives us time to work with countries to ensure that the rules are not watered down to allow for increasing commercialisation of what is supposed to be a special exemption to cover the identified needs of some aboriginal communities. 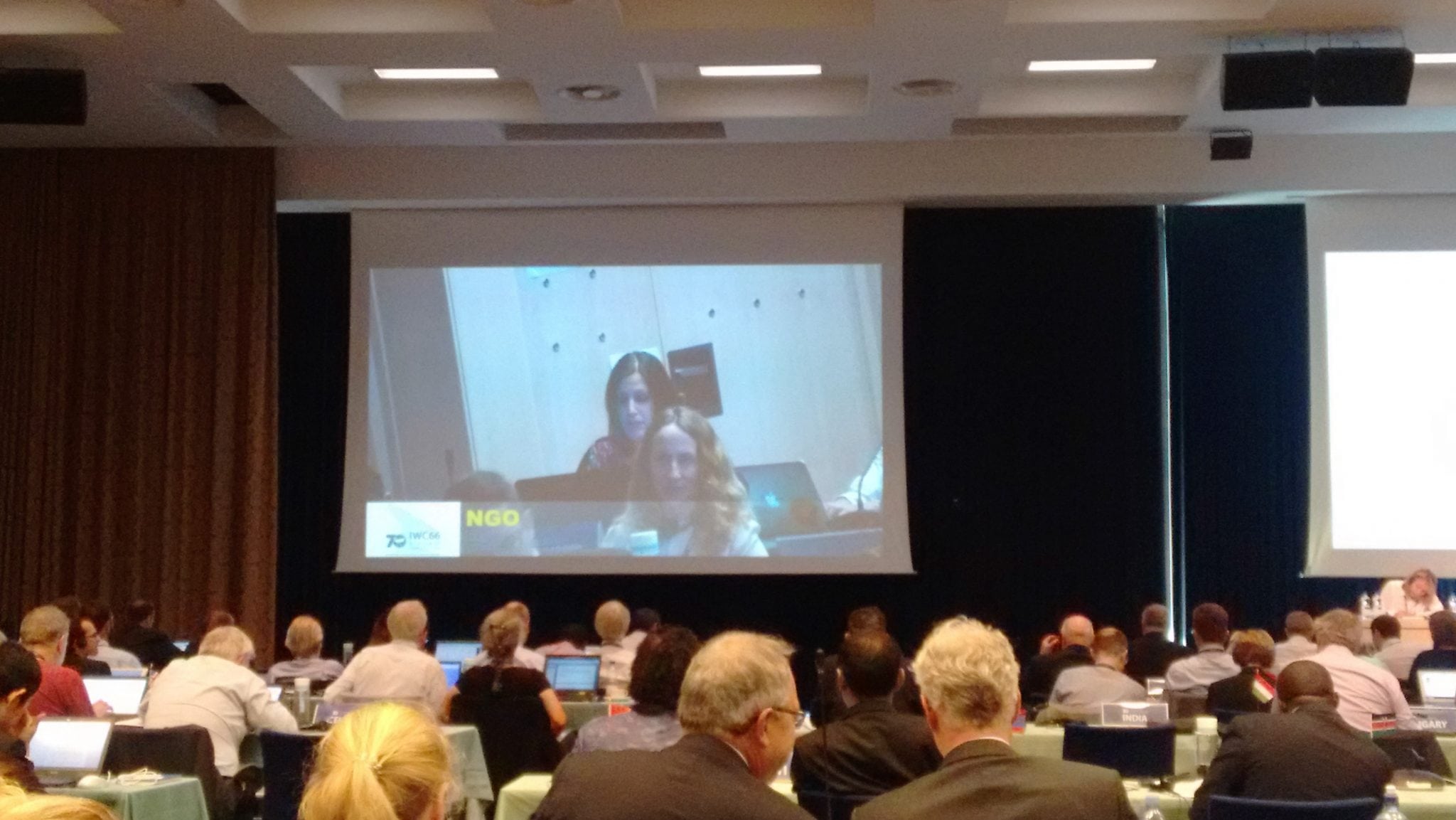 Although the commercial whaling of Iceland and Norway wasn’t taken to task in a resolution this year, we heard some great statements from the US and the EU amongst others against the two Nordic countries’ continued undermining of the IWC. It was very satisfying to watch the faces of the Norwegian and Icelandic delegates while a little storm of indignant criticism rained down on them. Up to that point they had been sitting comfortably in their chairs watching the show. So we had some great talk against the continued slaughter of whales in European waters, now we need to see some action!

A very positive surprise was the adoption of the last minute resolution on the vaquita. This little porpoise is facing extinction. The population level has fallen below 60 individuals and countries joined in consensus to agree on urgent measures to try to save this rare species. It was very sad to watch that even with an apparent no brainer like this, Japan and its allies really know no shame and refused to take part in the vote, just for the sake of making a political point. While no one tried to block consensus, they just didn’t partake in the decision, demonstrating their complete lack of vision and some would say, compassion for Mexico that is trying its best to deal with this issue.

So, taking everything into account, we did achieve some great things but this is still a work in progress. The next round of planning and strategising starts right now. What might now seem far down the line – IWC67 in Brazil – will be upon us much quicker than it might appear. And that meeting will be a big one. Japan will table another proposal for commercial minke whaling quotas off its coasts and the ASW countries will seek renewal of their quotas, in some cases most probably with an increased request.

While I began the blog with a few “blues” notes, I am, overall, very positive when looking ahead. We are living in a time of changes and paradigm shifts. The concept of whales and dolphins having a self worth in their own right- independent from human greed and need – is gaining ground. My favourite outcome of IWC67 remains the adoption of Chile’s proposal “Resolution on Cetaceans and Their Contributions to Ecosystem Functioning”. What sounds very dry and technical, is actually nothing short of a small revolution and speaks to the core of the need for complete and proper protection of whales, not only for their sake, but ours and the whole planet’s. And let me stop right there, not “just” whales are mentioned in the resolution but actually “cetaceans”, meaning all whales, dolphins and porpoises in our oceans, big and small. So that is in itself another victory of this resolution, the inclusion of small cetaceans in this groundbreaking step into the future.

Caro and I are very happy we could again play our small part in the bigger picture for a safer world for whales and dolphins. We are very grateful for the help provided by the many WDC supporters around the world. Without your help, we wouldn´t be able to continue to work towards a world where every whale and dolphin is safe and free.