It seems that this year’s Bardsey fieldwork has been and gone in a flash, it felt like I was only on the island for a few days when in fact 2 weeks had flown past, and I now find myself back in the office. Thanks to funding from Natural Resources Wales (NRW), we were able to be on Bardsey Island (Ynys Enlli) for two weeks starting over the August bank holiday weekend.

The weather has been a bit hit and miss for us this year; we would have spells of calm seas in the mornings that were soon whipped up into a frenzy by the wind, making it impossible for us to scan or get out on the boat.  Or very thick fog that we could only see a few feet in front of us, we often couldn’t even see the sea which was quite frustrating!

However, in between the rough seas we did have some excellent conditions for scanning and boat trips where we had a number of Risso’s dolphin sightings. In fact, we had Risso’s sightings every day (when we could see the sea), and some wonderful sightings of harbour porpoises too.

We often saw groups of up to 8 Risso’s dolphins hanging around the north and west coast of the island, some were mothers with calves. We managed to get out in the boat a couple of times, on one occasion the dolphins were elusive and stayed a good distance away from us.

Another encounter was with a group that were spread out as they were foraging, making it hard as we had to zigzag back and forth between them. One of the animals was completely white making it easier to spot. However the sea conditions were a little choppy, and deteriorated whilst we were out forcing us to end our boat trip early. In fact our colleague guiding us from the land would often lose sight of us as we disappeared behind the large swell!

For me the highlight would be when we were scanning from our platform at the north end of the island, and 2 Risso’s came in very close to shore right below our feet! We jumped into action grabbing our cameras and taking a number of photos from land. We were able to identify them as dolphins we had first photographed in 2014; we had named them H and Turtle due to the marks on their dorsal fins. Not only is it good to see these two individuals again, but they were also spotted together in 2014 and again this year. 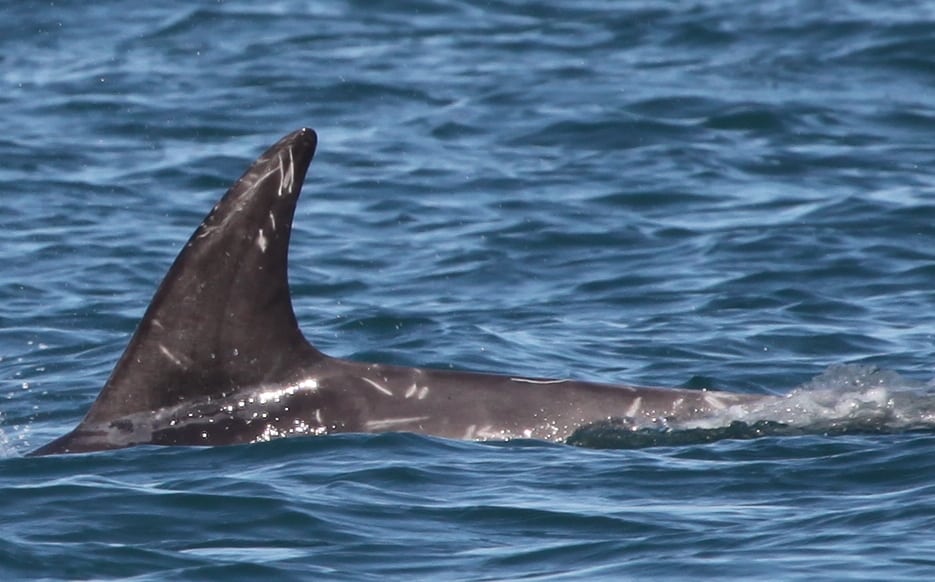 Watch a video made by our funders NRW, using footage we shot in 2014 and 2015, about the Risso’s dolphins and why Bardsey Island is important to them.