The recent run of strandings across Europe, has dismayed, fascinated and shocked people in equal measure.

Here we examine the events and take a closer look at the key questions: what has happened, why has it happened – and critically – what can we do prevent it.

At time of writing, 29 sperm whales have stranded across the UK, Netherlands and Germany since the beginning of the year, as well as several other species. 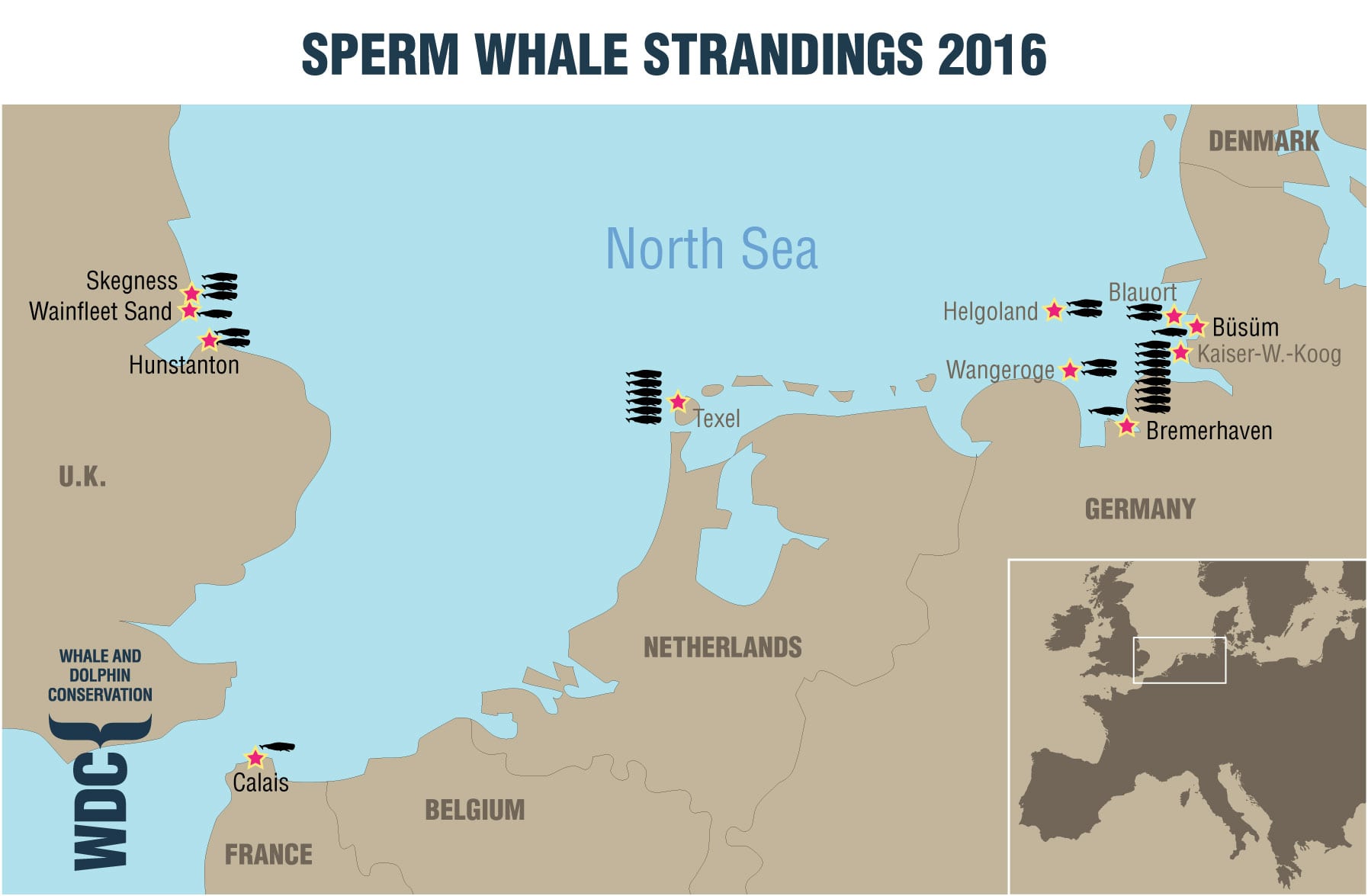 Most of the stranded sperm whales were dead when they stranded.  Some – such as the whale that stranded on the Norfolk coast on 4th February – were alive, but subsequently died, in spite of efforts to refloat the whale.

We know almost nothing about sperm whales populations in the Atlantic and, for example, how well they are recovering from large scale hunting in the past.

What may surprise many is the fact that there have been records of strandings of individual sperm whales, and groups, in the North Sea for at least 500 years. Most recently, in the 1990s, there were two mass strandings of 25 and 27 sperm whales (In 1994 and 1996), for example. So, whilst this may be big news now, this is not an unprecedented event. It might happen again in the next couple of months or years, it will certainly happen again in coming decades. Sperm whales that strand in the North Sea are mostly males because the females stay further south on the breeding grounds, for example off the Azores, and the males come north where there is less competition for food with the females, and larger squid prey for them to eat. There have been a few matches between the Azores and Norway but we know very little about the journey that the males make when they leave their natal group.

However, it is important to remember, there are over 3,000 strandings worldwide every year, and not all of them end in tragedy.

WDC has been involved in strandings in recent years, here in the UK, in North America, Latin America and the South Pacific.

Why is this happening?

Whale strandings occur naturally. But also, possibly as a result of man-made activity, such as noise from oil and gas exploration, pile driving into the sea bed to build wind farms, military sonar, or from  entanglement in fishing gear and collison with boats.

‘Live stranded whales and dolphins may seem to be healthy but could be old or unwell. Others may have suffered injury from boat propellers or entanglement in fishing nets and gear. At this point we simply don’t know why these sperm whales have stranded in such large numbers and we shouldn’t discount any potential cause(s) at this stage – except the obvious (entanglement, ingestion of debris, collision with ships).

Noise from various sources has been shown to disturb whales, for example construction and operation of wind farms (harbour porpoises), shipping (large baleen whales), seismic survey when searching for oil and gas (many species including sperm whales). Noise from military exercises (using loud explosions or powerful sonar) can also cause whales and dolphins to strand on the shoreline in various locations around the world. Remember, they live in a world of sound – using it to communicate, find food, and navigate. High levels of noise disrupt this world and threaten these creatures.

Each year thousands of whales, dolphins and porpoises get into trouble on coastlines around the world. In this case it could well be navigational error. In the case of species that live in groups with strong social or ‘family’ bonds, a lead animal in trouble may put the whole group in danger as they are reluctant to leave an individual alone. Sperm whales are used to very deep waters. It is likely that these sperm whales may have got lost, possibly following prey, and entered the North Sea, where the sea floor is not deep enough, nor does it provide their staple diet of deep sea squid, causing the whales to become dehydrated and disoriented and sadly, to subsequently die.’

What can we do about it?

WDC ‘s work is critical to understanding what happens when strandings occur.  We work with experts and groups on the ground, gathering information on individual strandings, but also comparing them over years, helping us to understand what has happened as best we can. Necropsies play a crucial part in this process.  For example, stomach contents tell us if the whale has fed recently, and on what prey. The analysis of the inner ear is critical too, telling us if a whale or dolphin has suffered from noise based trauma. (Unfortunately this needs to happen almost immediately upon death of the individual therefore it is not always possible to determine.)

The evidence gathered over the years, indicates that not all strandings are ‘natural,’ though it is often hard to pinpoint, and even ‘blame,’ specific activities at specific times. For example, we know mass standings have occurred in recent years in England and Scotland following extremely loud military exercises at sea but for others the reason for the stranding is just not possible to determine.

Additionally, what we know after years of analysis and information gathering, is that the oceans are getting noisier, and dirtier and busier. Our belief is that if this is not addressed, we may well see more strandings in the months and years to come.

Preventing deaths and entanglements in nets

Addressing pollution, including noise and sonar

If you want to help us understand and prevent strandings, please donate here

View all posts by chris.vick →