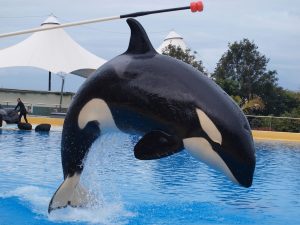 In June 2010 a young female orca was found alone and emaciated in the Wadden Sea, near the Dutch coast. Under a permit for rehabilitation and release she was taken to the dolphinarium Harderwijk and nursed back to health. On November 29, 2011 Morgan was transported again – but not into a sea pen to be prepared for the release back into the ocean – this time she was shipped to Spain! A Dutch court had ruled that it was in Morgan’s best interest to stay in captivity despite the fact that there was a thorough multi-stage release plan prepared for her by orca experts. This decision was upheld even after an appeal hearing in front of the Dutch High Court in December 2013.

In this video a team of independent film makers shows how it could have felt for Morgan when she got separated from her family and ended up in a concrete tank.

At Loro Parque, on Tenerife in the Canary Islands, Morgan is held together with 5 other orcas. Four of them were shipped to the park from the USA in 2006 and Adan, the youngest, was born on site in 2010. ALL the orcas are owned by SeaWorld Parks and Entertainments as SeaWorld also claims ownership of Morgan and lists her in their inventory. And this is not the only thing where Morgan has been failed as orca expert Dr. Ingrid Visser and attorney Matthew Spiegl uncover in their recently published white paper “CITES and the Marine Mammal Protection Act: Comity and Conflict at Loro Parque”.

According to the permit under which Morgan was shipped to Loro Parque, she should be used for scientific research. However, the reality is that Morgan makes daily appearances in the shows doing tricks for the paying public. When she is not performing  she is being held with Keto, a mature male orca. Offspring from this wild orca would bring a whole new bloodline into the SeaWorld orca stock. Of the 23 captive born orcas SeaWorld owns, 13 are blood related to the main breeding bull Tilikum, who featured in the 2013 documentary BLACKFISH.

The white paper was sent to the appropriate authorities in the Netherlands, Spain and also the US to investigate how a free-living orca from European waters could end up in the inventory of a US for-profit corporation.

More on orcas in captivity

13th October 2021
After a dire year of cancellation after cancellation, we were excited to travel to London on 18th September to support thirteen swimmers taking part in...

12th October 2021
And just like that, another season of field research studying remarkable Risso's dolphins came to a close. We've been visiting the Isle of Lewis for...

5th October 2021
The massacre of 1,428 Atlantic white-sided dolphins at Skálafjørður on the Faroe Islands on 12th September 2021 was beyond horrific.  It was senseless, barbaric and...

4th October 2021
Barely a couple of weeks since the massacre of almost 1,500 Atlantic white-sided dolphins in the Faroe Islands comes more horrifying news of dolphins being...
Load More