My first experience of whale watching in Norway was nearly 20 years ago when I, like thousands of others, made the trip to Tysfjorden high above the Arctic Circle to witness the phenomenon of large pods of orcas hunting the herring which were hiding out or ‘overwintering’ in the fjord’s deep waters.

The arrival of the orcas into this fjord system was first observed in the late 1980s where they became a regular feature during the winter months for the next two decades. Such was the public’s desire to see these beautiful creatures in their natural environment, all set against a stunning backdrop of snow-capped mountains, an entire tourist industry rapidly built up around the region. It was boom time for the restaurants, hotels and commercial boat operators as they catered for the growing number of whale enthusiasts who had come from all over the world to witness this spectacle. From a conservation and local awareness point of view it was also heartening to see such a positive interest in wildlife in a part of Norway that still had a strong whaling culture. 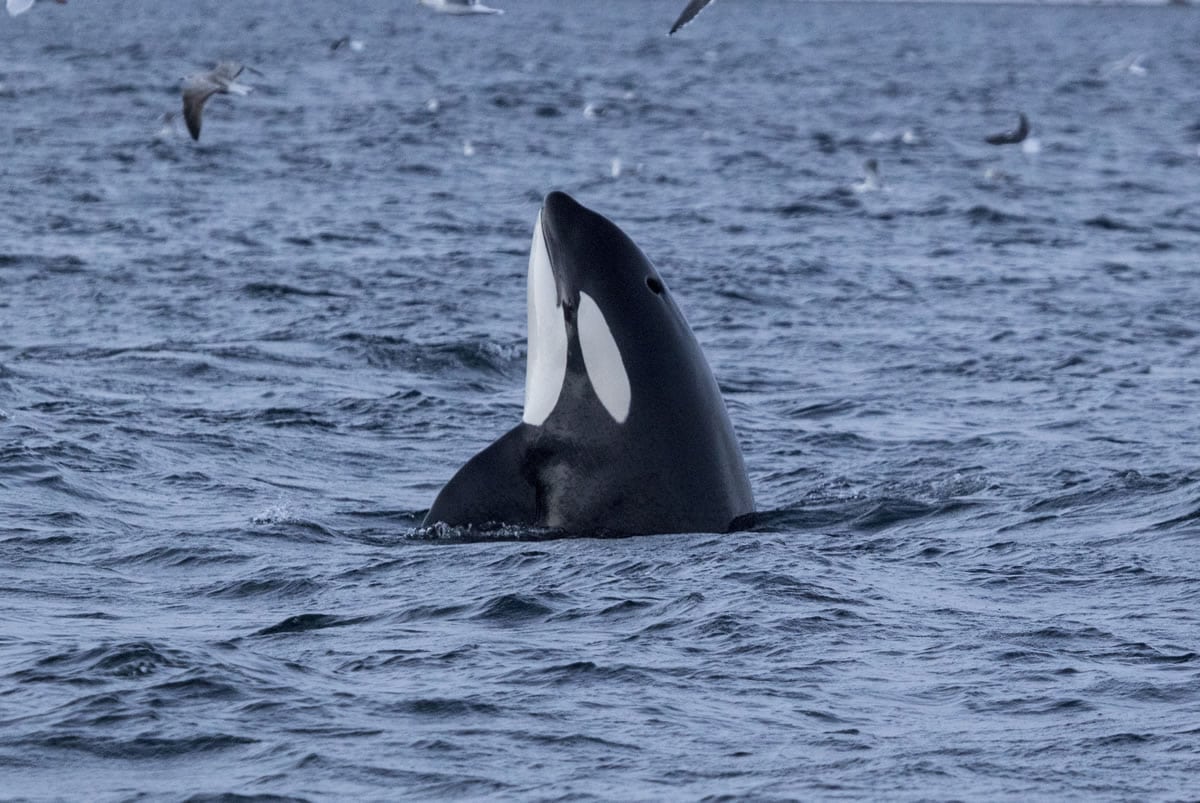 Then, several years ago, the herring stopped using Tysfjord and over the next two seasons the chances of seeing orcas hunting the herring dropped from over 90% to about 10% and so, too, did tourist numbers. In actual fact the herring hadn’t gone very far at all but had chosen a new overwintering area in less protected waters where tourist boats, in the short, dark days of an Arctic winter, couldn’t access.

And that was that….or so we thought. Fast forward to 2013 and reports start to filter in of orcas beginning to appear in the fjord systems around Tromso in early winter and then moving along the coast to the waters off Senja Island and Andfjorden in January and early February.

This time the orcas were often seen in the company of humpback whales and the occasional fin whale as the winter feeding frenzy quickly established itself at a new location. 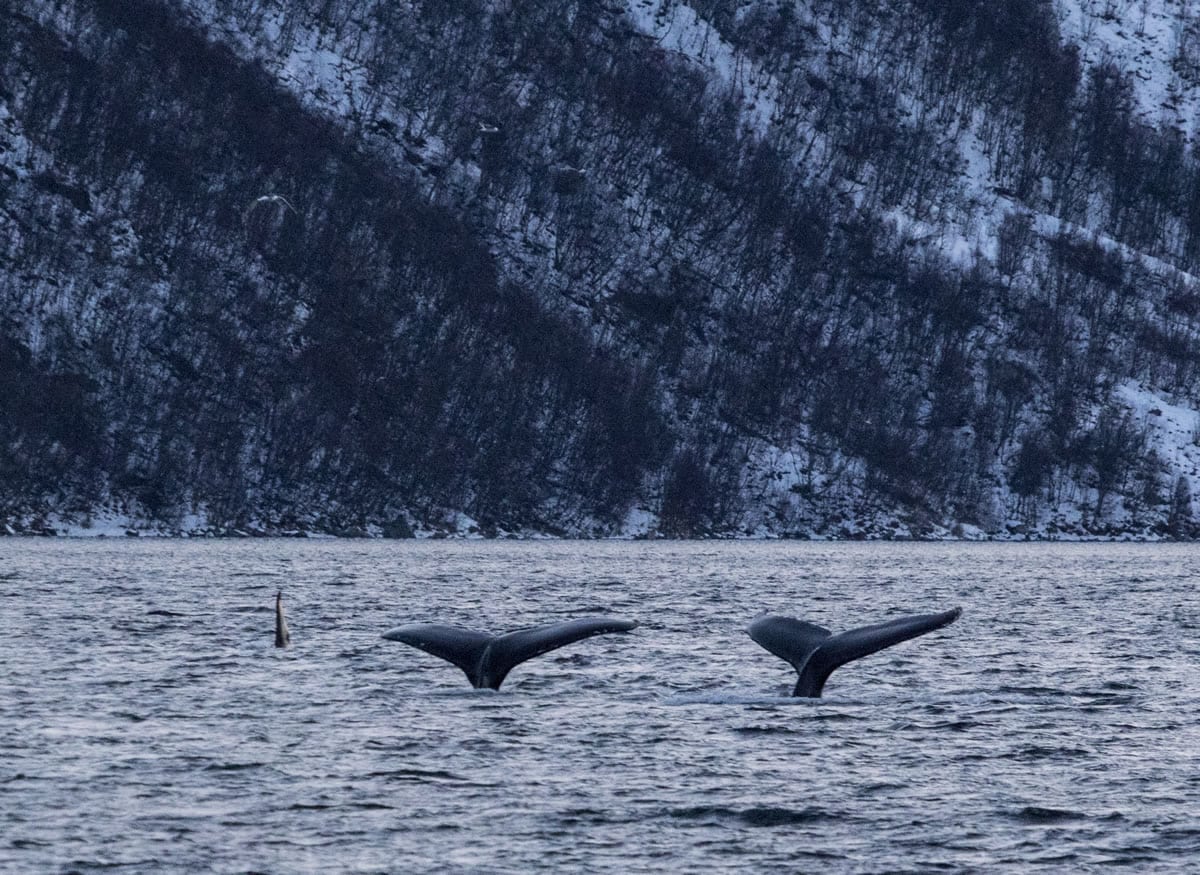 So now, late in November 2015, I find myself aboard the beautiful sailboat, Noorderlicht, with my WDC colleague and friend, Anja, sailing into the polar night on our quest to find orcas in the land of the northern lights.

Crossing a lumpy Andfjorden – a large low pressure system had moved through the area the previous day leaving long 5 metre swells – Sonja, one of our fellow passengers, let out a cry as the huge dorsal fin of a male orca sliced through the waves just 50 metres off our starboard side. Off to our port I briefly caught sight of another fin, but this particular pod appeared to be on a mission and was travelling fast and soon out of sight. 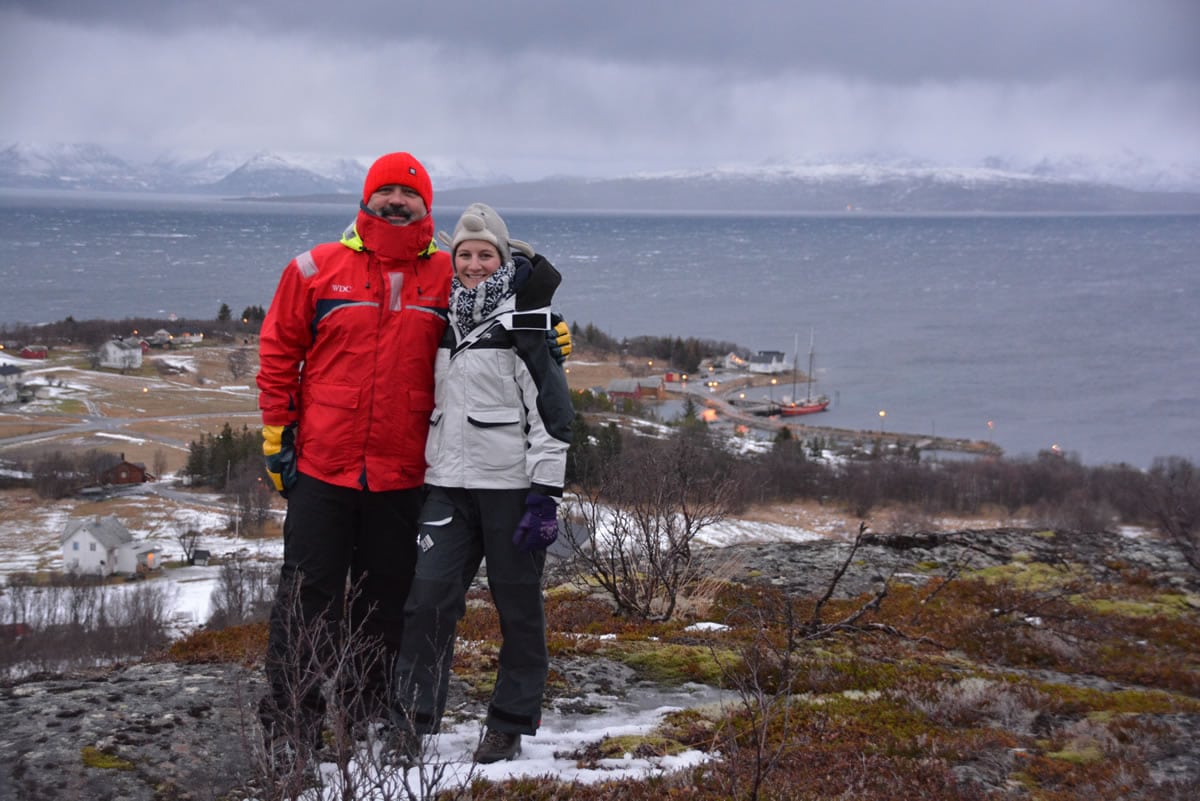 Gryllefjord was our port that night and some of the local fishermen there reported that a fjord system just north of us was ‘full’ of whales, so we set a new course for the Noorderlicht and made our way to Kaldfjorden near the small island of Vengsoya. 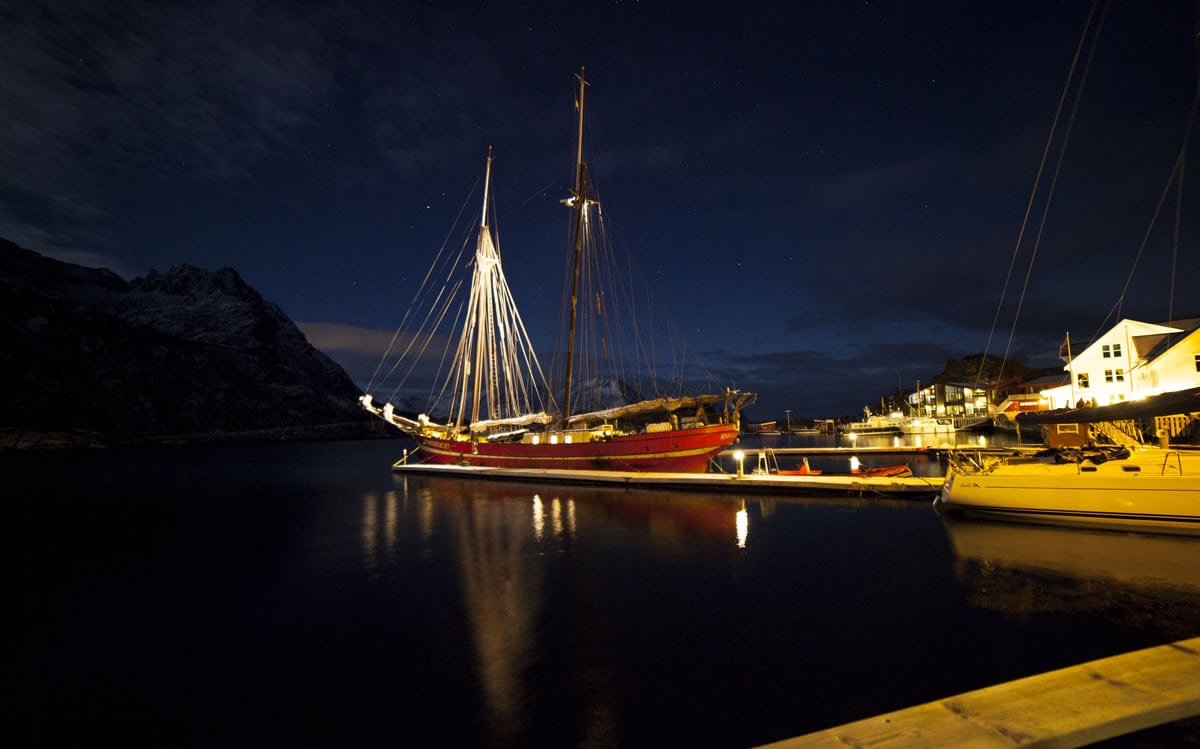 At this latitude in winter it doesn’t get light until 10am and is dark again by 2pm. By the end of November the sun will set for the final time that year and will not return until the middle of January.

We had high expectations as we sailed into Kaldfjorden but were more than a little anxious as we only had a few hours of ‘workable’ light.

We needn’t have worried as over the next four hours we were rewarded with an incredible encounter with 40+ orcas and 20+ humpbacks at the mouth of the fjord. The amazing thing was we didn’t really need to follow the whales at all as they stayed in the same, herring-rich area, the whole time.

The following morning, as the day dawned crisp and clear, proved to be even better. We found the orcas in the same place as yesterday only this time there were a few herring boats in the fjord which proved to be a magnet for the orcas as they picked off the herring escaping from their nets. I had seen orcas ‘working’ the nets before but something that really surprised me this year was seeing humpbacks doing the same thing! 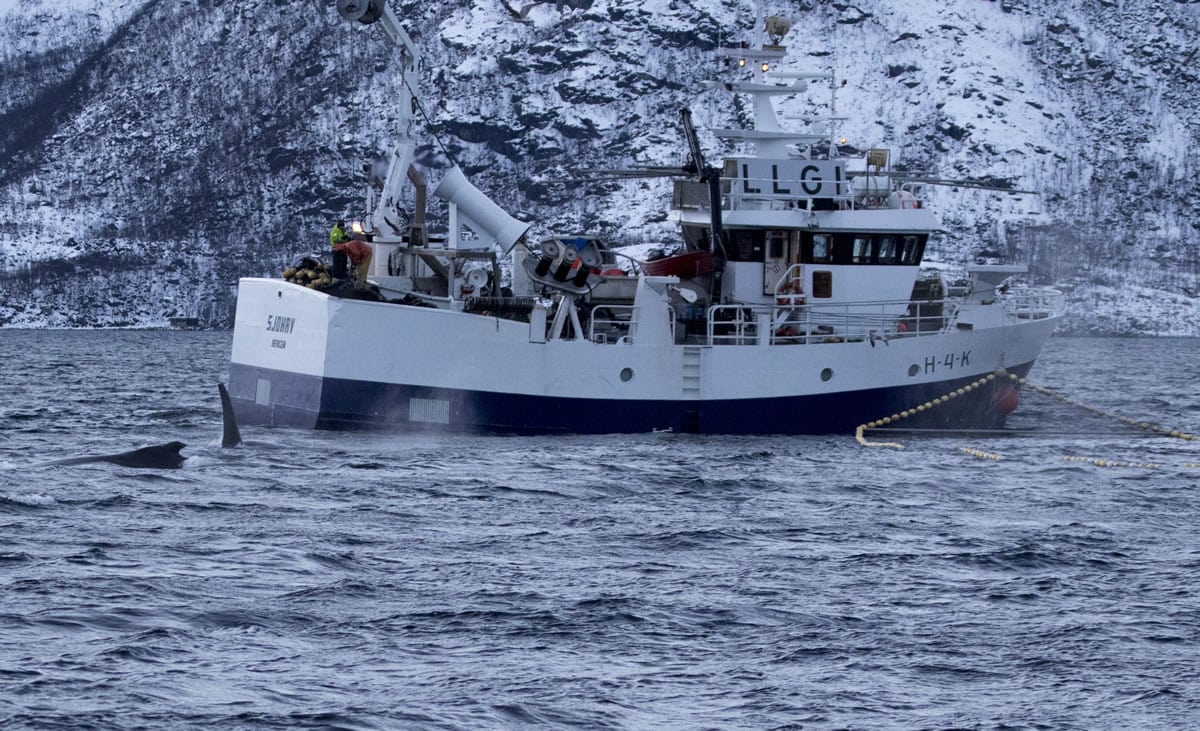 As we drifted amongst the whales our merry band of whale watchers tried to figure out how many whales we were actually seeing and our best estimate for this particular day was 100+ orcas and 60+ humpbacks. There were some very distinctive whales seen including one adult male orca with a floppy fin and one with a hook at the top of his fin. All the photos I had taken will be passed on to local whale researchers for identification, which will hopefully add another piece to the jigsaw puzzle as they try to figure out the number of whales using the fjord and their group structures. 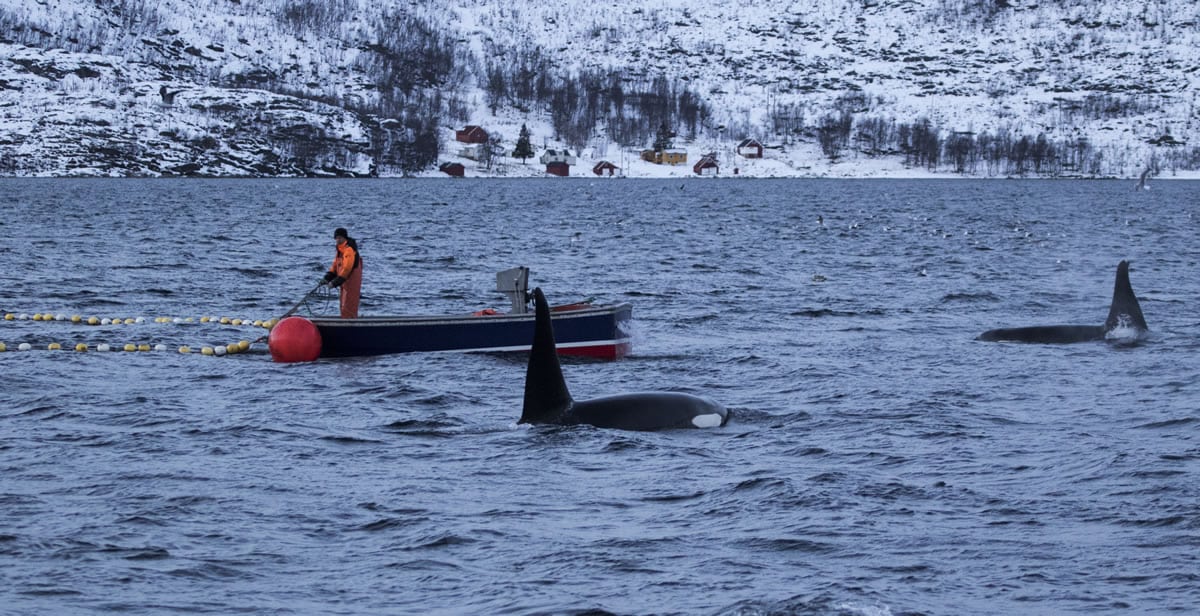 I’m reflecting on our experience this past week as we continue our circumnavigation of Senja Island heading back to port. We knew we were lucky as the Noorderlicht’s skipper was very respectful around the whales. Way to the north of us is the Svalbard archipelago famed for its polar bear, walrus and other wildlife. The region is governed by Norway under the Sysselmann and lays down some of the strictest environmental protection regulations in the world which all visitors must abide by. Unfortunately, there are no regulations governing whale watching boats in mainland Norway and while there are some excellent companies operating in the area there are some whose behaviour on the water was not as responsible. With no formal guidelines, codes of conduct or enforcement in place it is left to local independent conservation groups such as Ocean Sounds to suggest ‘best practice’ for operators and to try and make sure people make responsible whale watch choices and not selfish ones.

Some operators take people out not only to watch the whales but give them the opportunity to ‘swim with’ orcas. This activity is more strenuous and physically demanding as snorkellers, often of mixed ability, are on open boats in an area where the weather conditions can be extreme. We witnessed some of this today and the reality of this experience invariably involves dry suit clad passengers jumping into the icy waters of Arctic Norway ahead of a group of travelling orcas hoping for a fleeting glimpse of the whales as they swim quickly by. For some people the experience can be exciting, what the whales think of it……well, we just don’t know.

All the indicators suggests that northern Norway has a new Tysfjord on its hands so let’s hope that everybody involved with these smart, powerful, majestic creatures treats them with the space they need and the respect they deserve.