I can’t believe that this year’s Bardsey fieldwork has been and gone. Thanks to funding from Natural Resources Wales (NRW), we were able to be on Bardsey Island for two weeks in late August/ early September. Our team of two (Vicki James and myself) was reinforced by Ceri Wyn Morris, NRW’s new marine mammal specialist, who joined us for one week on the island of 20,000 saints.

We were welcomed back to the island with a wonderful Risso’s dolphin encounter on our first full day there with 11 Risso’s, first foraging and then coming together swimming slowly or logging at the surface just posing whilst we took some photo-Id pictures of them (under license No: 57839:OTH:SA:2014 from NRW). We weren’t so lucky with the weather the rest of that week though. High winds and boiling seas made it impossible to watch from our usual spot at the North End or go out on the boat.

The second week started out with a cold day watching from the North End where we only saw one harbour porpoise in 4 hours. That’s when you start to wish that you were studying a species that was a bit easier to watch in a country that was a bit warmer than the UK! But the next day, the island gave us a real treat, and a day we will never forget. We first had an amazing encounter with more than 30 Risso’s dolphins (we are still doing the photo-ID on this encounter and are up to 36 different animals with more pictures still to do) that were feeding and foraging around the boat. My words will not come close to describe what we have witnessed on that day, but I will try. There was a mass of dolphin fins going down one after the other almost in the same spot to leave not a ripple on the flat calm water, making us wonder where they had gone. There were ten or more dolphins simultaneously jumping out of the water in a circle and then crashing head first into the middle of that circle making us fear that they would knock each other unconscious. There was surface rushing, leaping and jumping so close to the boat that I couldn’t get photo-ID shots because the camera couldn’t focus! We kept oohing and aahing, while taking over 1000 pictures and video between us. After 2 hours we called it quits, because the dolphins steadily moved away from the island. 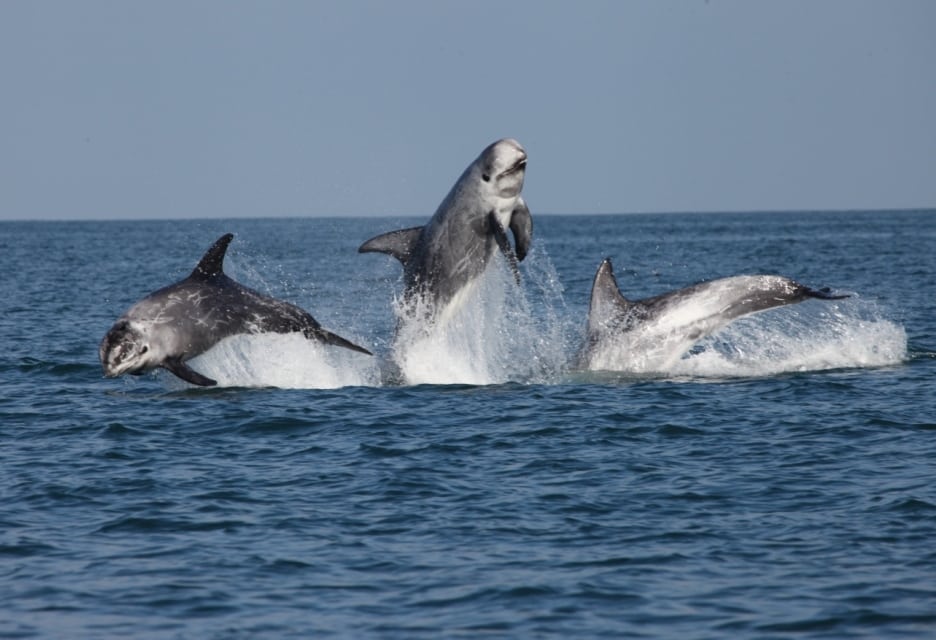 Back on land I needed to make a phone call from the North End (one of the few places where you get mobile reception on Bardsey). So, I’m sitting there talking to my colleague Nicola, when 3 Risso’s dolphins lazily swim into Nant Bay just underneath me, followed by another 3 and then another 4! I didn’t have any equipment with me other than a radio that decided to die on me there and then when I tried to hail Vicki at the Bird Observatory, so I legged it back to the Obs, grabbed the camera and shouted at Vicki that there were Risso’s close in and ran back to the North End to photographically catch a group of 18+ dolphins (again, we are still doing the photo-ID here) ambling in the bay really close to the shore! We couldn’t believe our luck!

The next day followed with another 3 encounters of Risso’s from the boat all of which were of foraging dolphins which this time was hard, as they were very spread out and we had to zigzag back and forth between them.

During the two weeks on Bardsey this year, we spent 6.5 hours on the water and had 6 photo-Id-able Risso’s dolphin encounters from the boat and 1 from land! We are in the process of analysing our data and writing our report, but for me this was one of the most successful field seasons I’ve had on Bardsey when it comes to photo-ID encounters! It puts a smile on my face every time when I look at the pictures from the mad 30+ Risso’s encounter!