It’s not often that whaling campaigners are left momentarily speechless –we’re too used to dealing with the unimaginable and standing up for the rights of those that have no voice – but events at this week’s Green Week fair in Germany left us open-mouthed and left others, some in high places, with egg on their faces.

So what happened? On Wednesday morning, we learned that marinated Norwegian minke whale meat, dressed with salad garnish and served with a dollop of either blueberry or chilli jam, was available to all-comers at a mere 2 Euros a portion, at the Fjord Norway stand at the annual Grüne Woche (Green Week) fair in Berlin, which this year runs between 17th -26th January. 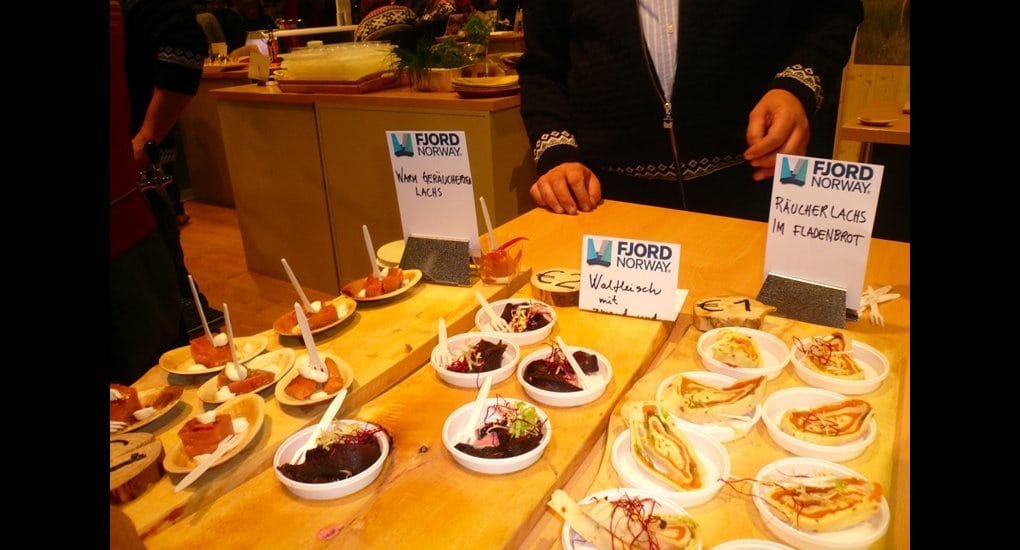 The size and importance of this event shouldn’t be underestimated. Established in 1926, the event proudly proclaims itself as the world’s biggest fair for food, agriculture and horticulture, this year boasting 1,650 exhibitors from 70 countries and expecting over 400,000 visitors, including 150 leading politicians from various countries and 5,000 journalists. Open to the public as well as trade representatives, it attracts producers from around the world who come to showcase their brands, including luxury and traditional food items.

Unable to believe this flagrant violation of EU laws (which strictly prohibit the import or sale of whale products in Germany and across the EU) at such a high-profile event, we sent an investigator to the scene.  He confirmed that whale meat was openly on sale and took photographs. We moved quickly to inform the German Federal Environment Ministry which in turn informed customs officials.  Within hours, any unsold whale meat – around 3 kilos of the original 7 kilos imported – had been confiscated.

Fjord Norway stallholder, Arne Andreas Rød, expressed surprise that selling whale meat was illegal in Germany and indeed for a while, the Norwegians stuck stubbornly to this line, claiming indignantly that they had declared the meat and taken it through customs without any problems.

However, as media interest intensified and the anger of the German authorities grew, this defence of ‘ignorance of the law’ began to look paper-thin, as it became clear that Arne Andreas Rød was employed by Innovation Norway, a state-owned company which just happens to be the Norwegian government’s official trade representative abroad and responsible for Norwegian participation at the event. Indeed, Innovation Norway has been involved in numerous campaigns in recent years to identify and develop domestic markets for whale meat and they cannot possibly have been unaware of the ban on trade in whale meat and products in most countries. It was further revealed that Sylvi Listhaug, the Norwegian agriculture minister attended the opening of the event.

Innovation Norway today issued an apology, saying that they regretted acting in violation of German law. “This should not have happened, and we can only regret this error” said press spokesperson Kjetil Svorkmo Bergmann.

We find it incredible that so many people claim ignorance of the law. Firstly, Innovation Norway must surely have been aware that they could not legally sell this dish in Germany; secondly, the fair’s organisers appear not to have realised that they needed to take action, despite the dish being clearly labelled as whale meat; and finally, despite the meat being on sale for several days before being exposed on Wednesday, not a single visitor, of the tens of thousands that must have passed through its doors in the five days since the event opened, thought to question or report the meat!

Indeed, as around 4 kilos of the meat had already been sold, many people attending the fair, presumably unwittingly, have purchased and consumed an illegal product.

Germany is a country that prides itself on its environmentalism and championing of conservation issues.  If such a blatant abuse of the law can happen here, in an international event attracting hundreds of thousands of visitors, then what chance do we have to get the message across in less environmentally-aware regions?  The challenge, surely, is for all of us: law makers, conservation organisations and concerned citizens alike, to educate and outreach so that further abuses do not pass unchallenged.

This incident underlines the fact that any moves to legalise whaling will only result in widespread abuse of border controls. If a Norwegian government agency is willing to flout the law now, what will it be like if the IWC moratorium was struck down and Norwegian whaling interests were able to flood the market?