In the crisp, clean mornings of autumn the cold can catch you by surprise and so can whales and dolphins; they seem to turn up when you least expect it!

Although most sightings are reported during the summer months, whales and dolphins can be seen around the UK all year, and during our recent autumn the majority of the sightings were from the English Channel, with encounters also reported from Scotland and Wales.

In September three bottlenose dolphins were spotted in the English Channel by the Seahorse Trust, on the same trip they also spotted what was possibly a fin whale. It can be difficult to distinguish Fin whales from other rorqual whales, such as the sei whale, when at sea. So, when spotting whales and dolphins, it’s important to describe what you see rather than make assumptions based on expectation; see the species guide on our website, or download our identification guide for pointers. 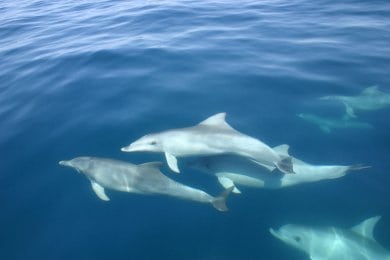 Bottlenose dolphins were also spotted in the English Channel in October; they were accompanied by a group of c. 50 common dolphins that were travelling alongside the ferry and bow riding.

In the Firth of Forth, several groups of bottlenose dolphins were watched by Marilyn Nugent for half an hour whilst walking the coastal path, the dolphins headed out of Firth of Forth and into Largo Bay. There were about six groups with many of which had small calves.

Risso’s dolphins were seen on a number of occasions Off Bardsey Island, North Wales, in September and October. Usually spotted in small groups, the dolphins hung around for a while close to shore. We have been sent a number of photos of the dolphins and have been able to match individual animals with those we have photographed during the fieldwork we undertaken from Bardsey Island since 1999.

There is so much to see out there so KEEP SPOTTING, even through frozen hands and fluffy breath, so keep sending us your sightings, photos and videos.