About 15 years ago, WDC first called upon the UK government to put in place Special Areas of Conservation (SACs) for harbour porpoises to fulfil their European responsibility to do so.

Denmark, Germany and Northern Ireland, amongst other European countries, have all put SACs in place to protect porpoises in their national waters. The deadline for completing the SAC network was way back in 2004.

In England, Scotland and Wales we still have no SACs, despite having some of the highest densities of porpoises in Europe. So what is the decade-long hold up with designation of SACs here?

Historically, the UK government has argued that such spatial protection is not warranted for porpoises (and other mobile species), but that using individual sector-based measures (like using noisy pingers on fishing nets to reduce bycatch) is the way to deal with the threats that porpoises face. But such an approach is short sighted. It does not deal with all the threats that porpoises face, it is not pre-emptive of new, emerging threats and, importantly, it is not compliant with the European Directive that offers them strict protection. 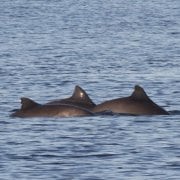 Porpoises are our most abundance coastal species and there is still much we have to learn about them. WDC and our network of dedicated volunteers collect field data to contribute to and improve this important knowledge base, with the aim of better conservation.

Last month WDC provided evidence to Defra identifying SACs for harbour porpoises around the UK and comparing the lack of SACs in UK waters with other European states. We used an example in the Hebrides on the west coast of Scotland to show how a combination of site protection mechanisms (at UK, European and global scales) could lead to effective protection of porpoises, and a wide diversity of other important marine species. At the same time, our colleagues at ClientEarth provided the legal arguments as to why Defra is failing harbour porpoises in not designating SACs.

This week WDC and ClientEarth met with Defra and JNCC to discuss our work and their future plans. We’re pleased to report that having faced considerable pressure from the European Commission, WDC and other parties, the UK government is now investigating how porpoise SACs can be put in place in English, Welsh and Scottish waters. What these might look like is still not known but WDC will continue to call for better protection for porpoises, including through the designation of a network of SACs and we will contribute our own valuable field data to contribute to this process.

We look forward to working with the UK and devolved administrations to put such a network of SACs in place. In addition to conserving our porpoises, such a measure demonstrates that protected areas for mobile species can (and should) be achieved, including to help meet our international obligations.

There will be an opportunity for you to have your say during a public consultation that is expected to take place later in 2014 or early 2015 – and in the meantime, we will keep you up to date with any progress made.