Wow! Six weeks over already! I can’t believe it, it went way too fast! It feels like I’ve only arrived on my magic island yesterday! But then again, it doesn’t, because so many things happened… 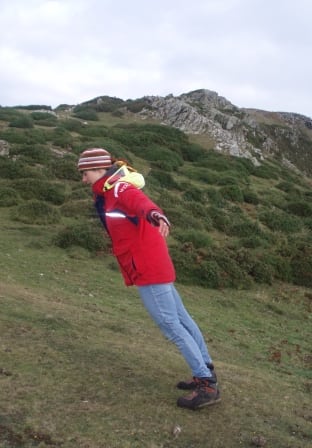 Last week, there was a weather window with calm seas and balmy sunshine, and farmer Steve wasn’t busy doing farm stuff, so we, that is Vicki, Lucy and myself, went out on Pererin, farmer Steve’s boat. We had just come round the south end of the island and thought we’d spotted something to the north, when Ben, farmer Steve’s son, hailed us on the radio saying he was seeing something going on in the distance. He couldn’t quite make out what it was, but there were gannets circling and diving and a group of dark shapes underneath. We steered the boat in the indicated direction and lo and behold there was a group of common dolphins in a feeding frenzy, gannets circling above and diving in amongst the dolphins! It was a fantastic sight. We counted about 30 dolphins including five calves one of which was just barely longer than my arm! They came to check out our boat and get a free ride on our bow wave and whenever we pulled away or slowed down, they all slowed down to see what the matter was. It was quite magical to see the calves surface rush just like the adults, coming to the boat, just to be reigned back by their ever vigilant elders. While Vicki and I were frantically trying to capture what was going on around the boat with our cameras (which sometimes was impossible as the dolphins were too close for our cameras to focus on), Lucy had settled down on the bow of Pererin with our little video camera and was filming the whole scene. Imagine our joy when we came back to the Obs and were able to relive some of the encounter again! Brilliant! 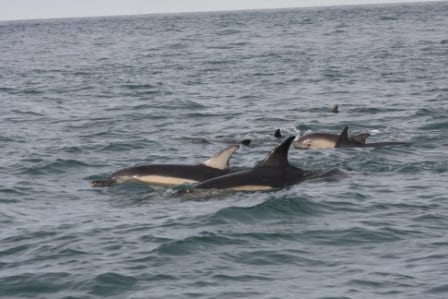 I must admit that Bananagrams played a big part in our entertainment, and you will understand our obsession with this game once you’ve played it just once, as it’s seriously addictive! Qi, Zo, Aa and Ai are only a few of the words I’ve learned playing this game (and sorry, you will have to go and look them up if you don’t know what they mean). Oh and I didn’t lose every game this year! Ha! 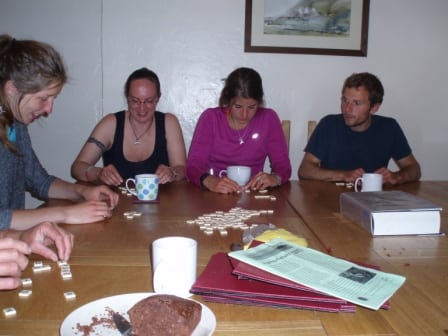 We also once in a while gathered in the Bird Obs gift shop to watch a movie in the evenings. I will never forget how Ben did some birding while we were watching the movie “The Woman in Black” one evening! While Lucy and Vicki were fearfully hiding behind their blankets, Ben was shouting out names of birds he saw and heard in the movie! We seriously considered doing a bird log after the movie was over! And yes, it can get even weirder than that! Here’s just one of our discussions while casually scanning for cetaceans from the Bird Obs: Pine: “Great, now we have a horizon, but lots of white caps!” Vicki: “Yeah, that’s Sod’s law for you!” Pine:“Speaking of Sod’s law, you know that Murphy’s law says that a piece of buttered toast will always fall onto the buttered side, right?” Vicki with a wrinkled brow: “Yeah?!” Pine: “…and a cat will always land on its paws?” Vicki with an even more wrinkled brow and slight concern on her face: “Er… yeah?!?” Pine: “So, if I were to strap a buttered piece of toast with the buttered side up onto the back of a cat and let it drop from a certain height, would it spin in space?” (grinning madly). After some contemplation, we came to the conclusion that the cat would probably land on its paws, because it is not an inert object and can change its fate! Ta-dah! And because I’m already at it, I will also share our fantastic supercallifragilisticexpiallidocious song with you – The 12 days of survey (to the tune of the well-known Christmas song, The 12 days of Christmas): On the first day of survey, this is what we saw: One fantastic master baker. On the second day of survey, this is what we saw: Two trampolines And a fantastic master baker. On the third day of survey, this is what we saw: Three birding Steves, Two trampolines and A fantastic master baker. (You’re getting the idea? I’ll skip to the twelfth day then!) On the twelfth day of survey, this is what we saw: Twelve sailboats sailing. Eleven waves-a-crashing Ten porpoise leaping Nine compost toilets Eight sheep-a-grazing Seven gannets diving Six Risso’s jumping Five bottlenose dolphins Four lovely dogs Three birding Steves, Two trampolines and A fantastic master baker. And no, we didn’t lose our minds.What else? The birds and the bees and the flowers and the trees… I digress. But there were birds, lots of them, and we were allowed to watch the ringing and once in a while let them go too. Rob’s goldcrest almost flew into his face after he’d released it and my dunnock was just happily sitting in my hand when I took the other hand away, not flying anywhere for a full minute! It was quite comfortable there! 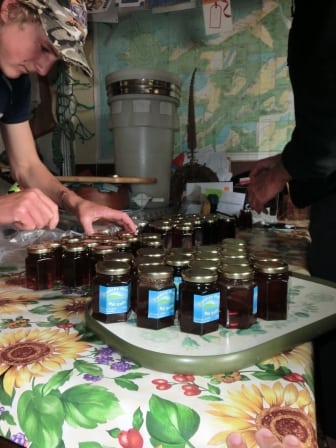 And there were bees too! I helped farmer Steve feed the bees for the winter. It was pouring with rain that day and the bees weren’t that happy about the disturbance, but we were quick and managed not to aggravate them too long. Bottling the dark heather honey in the Porter’s kitchen is another memory I will hold dear. Coming back to the office (with round-the-clock internet access, a desk, a chair and no prickly gorse poking me all the time!), I now have the task of analysing all the data we gathered and to go through the hundreds of photos we took during our encounter! That will keep me busy for the next couple of weeks! 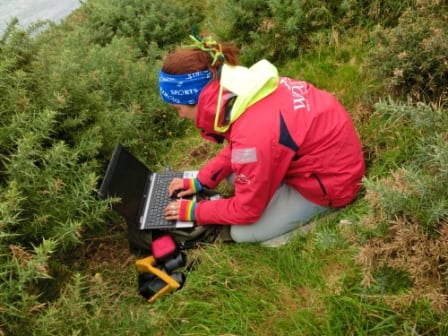 Those gorse bush office times are past

What’s left for me to do now is to thank everyone who made this survey possible and a success! Thanks to the Ecosystem Resilience and Diversity Fund of the Welsh Government, the BBC Wildlife Fund and Elite Couriers for their financial support. A big thank you to my lovely volunteers James, Kirsty, Harriet, Bea, Pete, Lucy, Ben and Ingela, and my colleagues Vicki, Rob and Mark for all their help, support and good humour! You were all fantastic and made the time on Bardsey really special! Also thanks to the Bird Obs team, Steve Obs, Icky Steve, Rich B, Mark, Chris, Emma, Conner and Giselle, as well as Steve, Jo, Rachel and Ben Porter for their warm welcome back to the island and all the lovely memories I will have for the rest of my life! Once again, Bardsey I salute you! Diolch yn fawr! 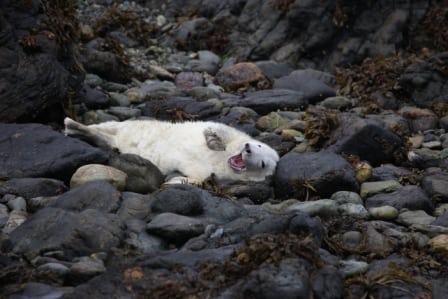 All smiles – Mandy the seal pup is taking it easy. 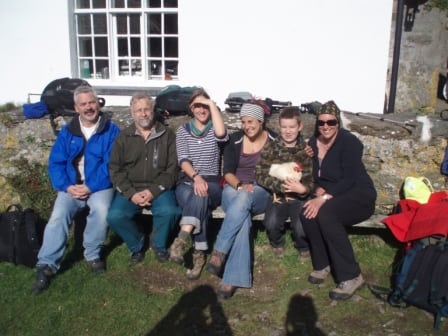