Pete Taylor, a WDCS science volunteer, and I, Vicki James, WDCS’s Science Assistant, arrived on the beautiful island of Bardsey for the third week of survey replacing Bea and James. We joined Harriet and our fearless leader Pine. I’m fortunate enough to be here for the next few weeks and have already relaxed and unwound into island life. We had a beautiful ferry crossing to the island and were soon having our welcome talk from the bird observatory staff, along with a cuppa. There were many familiar faces from when I have been here on previous surveys. I am fortunate enough to have been here at least five times before. It was lovely to see everyone and it felt like being welcomed back and catching up with old friends. My first day was spent at the north end platform scanning the seas for any whales or dolphins that may pop up out of the water. Pine and I were treated to a number of harbour porpoises first thing in the morning as they passed through Bardsey Sound heading west. We had our lunch sitting outside the front of the bird observatory; however we still didn’t take our eyes off the sea as you never know when one may make an appearance. Very quickly the shout of “Risso’s” went up as a group were spotted slowly passing along the west coast of the island heading south. Pine was soon on the radio to farmer Steve to see if he was free to take us out on his boat so we could try and take some photographs to hopefully later identify the animals. He was currently busy, but said he may be available in about an hour. We just had to hope the Risso’s were still there then. However it wasn’t long until we lost them, and we thought our chances of getting out were scuppered. That soon changed when Pine picked them out again through her binoculars coming back south. This time farmer Steve was free and in 20 minutes we had kitted up and were ready to go. After some expert manoeuvring by Steve to get the boat out of the harbour (the tide was very low, so there wasn’t much water to move in), we were on our way out to try and find the Risso’s dolphins to photograph them. We headed in the direction they were last seen, everyone had their eyes peeled. Pine spotted a group of gannets circling, seabirds can sometimes be a sign of cetaceans feeding beneath the surface, so we headed there and soon sighted a group of 3 Risso’s dolphins, including a mother and calf. Photographing provided highly tricky though, they seemed to be camera shy! We moved around them to try and position ourselves to their side to get shots of their dorsal fins; however each time they surfaced they were in a different location to where we thought they would surface! We didn’t want to disturb the animals so left them to it and headed to another group that we saw not too far ahead of us that were displaying like mad. 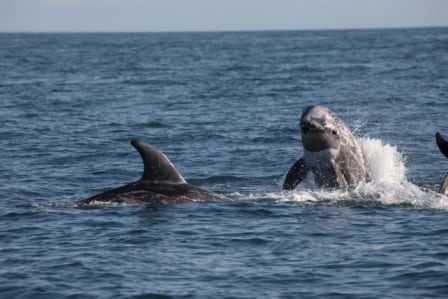 This time we were in for a treat, as this group of about 10 Risso’s were breaching in unison and tail slapping right in front of us. They all seemed to be concentrating on one area of the sea; a number would breach together landing almost on top of each other; this behaviour made us think it could be a feeding frenzy. Pine had one camera and I the other, we were on opposite sides of the boat photographing the dorsal fins as best we could in this frenzy of activity. Harriet did an amazing job of recording all our sightings and Pete was keeping an eye on the different groups and pointing us to where they all were. Unusually we also noticed two common dolphins in with the group in the midst of all the activity. Common dolphins are quite curious and love to bow-ride; they came over to our boat and passed right beneath us, turning on their sides, almost as if to look up at us as they passed beneath. 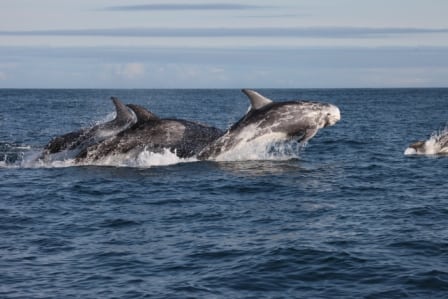 We were with the group for about 40 minutes before we had to leave them and head back to the island. We could still see them displaying even as we got back to the island. Needless to say all of us were grinning from ear to ear – for the rest of the day and evening – after such an amazing encounter. We had hoped for more days like that, but it wasn’t to be. So far the weather hasn’t been that kind to us for surveying. We have been out most mornings, but conditions have deteriorated as the day has gone on with choppy seas and poor visibility making it impossible to scan the seas and spot any animals out there. One day we were scanning in blue skies and calm seas watching a slowly approaching front of bad weather coming up from the south, thinking it would take a while before it reached us, but in a matter of minutes we were enveloped in thick fog and we could barely see the cliff edge in front of us. We sat there in the (deluded) hope that it would pass and we could carry on, but it was stubborn and stayed for the rest of the day. 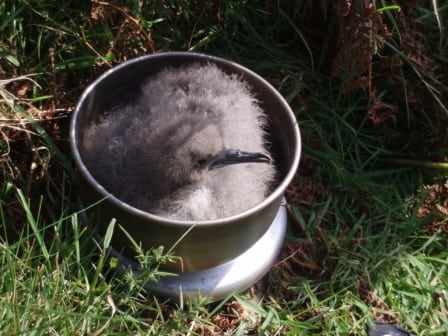 Our down-time has been well spent; we have gone to watch when the bird observatory staff have been ringing manx shearwater chicks. These little balls of down are super cute and it has been fascinating learning all about them. 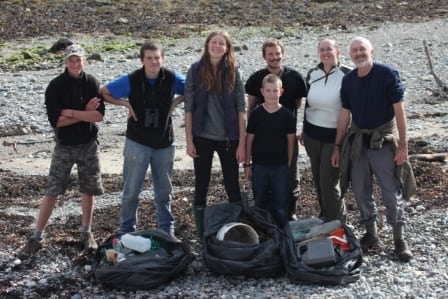 We also decided to do a beach clean one afternoon and it was a staggering amount of rubbish that washed up even on the small beaches here on Bardsey. Plastic was the main culprit we picked up, there were lots and lots of plastic bottles and bottle tops along with large pieces of netting. We picked three big bin bags full or rubbish and could have filled many more. The damage that this litter can do was apparent just the other day when a seal was spotted with fishing line around its neck that was deeply embedded. Unfortunately we weren’t able to help. We will certainly be doing other beach cleans before we leave. 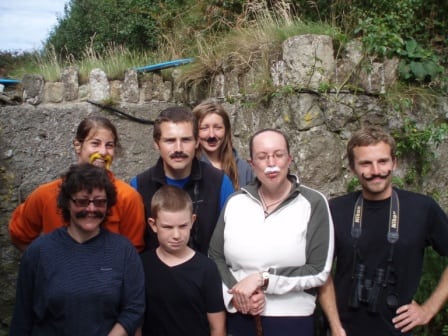 We also picked damsens for Emma, the wardens’ wife, to make jam and sell in the bird obs shop. We did this wearing moustaches given to Pine by our boss, Mark Simmonds. It was a hilarious sight and caused squeals of laughter all around. Evenings and time off has been spent playing football, volleyball (badly!), trampolining, hiking over the mountain to enjoy the stunning views over the island and across to the mainland and finding Merlin’s cave and the hold hut circles. Also the addiction to the game bananagrams continues….