Yahoo … I’m back, both here on Lewis and here on the blog! Go on admit it … you’ve missed me haven’t you?!

Our humans have had some great land based sightings since we’ve arrived, a lot of which have been really close to the coast and therefore we’ve had lots of fun running over the heather and jumping bogs to get as close to the critters as possible. Some times they’ve been only metres away from us … ! Personally, i think that the dolphins heard that we were back and came to say thanks for our efforts on the Dolphin-Dog Walk … on which note it’s still not too late to donate to our worthy cause– and if you do that’ll likely mean more treats for us, although to be honest it’s not that we do too badly as it is … but who doesn’t like an extra chew every now and then? It’s been great returning to our old stomping grounds, otherwise known as some of the most beautiful beaches i’ve ever had the pleasure to walk on. I have to say, what i find quite bizarre is when the wind is blowing so hard that it almost knocks you over, you’d expect massive rollers crashing onto the shore but no … sometimes there’s hardly a wave … apparently it has something to do with the wind blowing so hard in the opposite direction that the waves have no momentum whatsoever!! Weird eh? But better for us canines who are a wee bit shy of big white foam! The highlight so far for my trusty assistant (Harvey – remember him?) and I, has been our “new” walk. 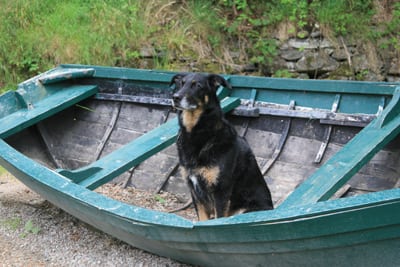 My trusty assistant Harvey – likes the idea of being a “boat” dog but in reality prefers dry land .. and bogs!

It’s only taken our humans 3 years but they’ve finally stumbled upon … wait for it … drum roll please … a WOOD! I know … i didn’t believe it either and thought i was dreaming but yes, here on what i historically referred to as the “Stickless Isles”, there is in fact a secret haven (or should that be heaven?) with a plethora of toys for us canine carbon munchers!! Very exciting indeed … and as far as we’re concerned, possibly the best find our humans have had since they found the local butchers!! 🙂 Even Harvey, who’s not known for his fondness of sticks, has been getting in on the act, although i think i may have to reprimand him somewhat as despite there being an abundance of sticks, for some reason he always wants mine! 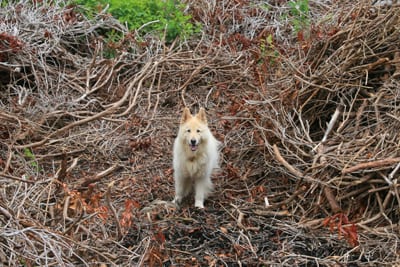 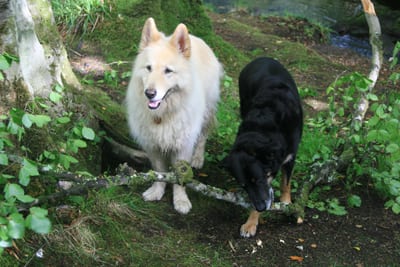 Due to the bad weather (well only “bad” if you’re wanting to look for dolphins and other marine things) we’ve managed to persuade our humans to let us visit the “wood” a good few times and we’ve not yet been on the same path, this must be some size of wood!! (Note from human = the “wood” is otherwise known as Lews Castle Grounds and is 600 acres of mature woodland that has been here for centuries!). Harvey and i think they must be feeling a wee bit guilty about never having brought us here before and making us make do with driftwood and seaweed … although to be honest seaweed is pretty yummy! Other exciting things to happen on the island since we’ve arrived include the stranding of a minke whale up on the north coast of the island. We were keen to go and check it out but the humans wouldn’t let us as it had been dead a while and they thought it best we stayed away! 🙁 … But CSI Lewis (Canine Strandings Investigations) have not been idle and only yesterday, on our local beach, we sniffed out a poor dolphin who’d obviously been dead for a wee while. Possibly a bit far gone to determine what species it is/was but hey, that’s not our job … we leave that to the humans, we just find them! 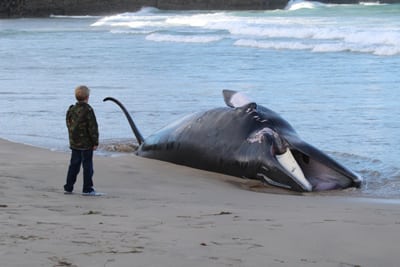 The poor minke whale who came ashore (dead) on the north coast. 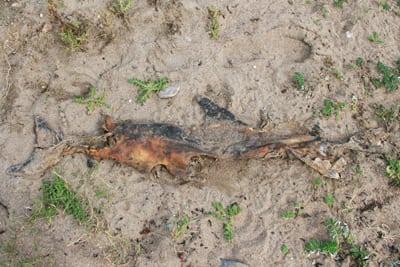 Our recent beach find … a dolphin of some description!!

Sadly (for the humans that is) the weather is due to continue to be pretty atrocious for the coming few days … yeah, more walks, ahem .. i mean, aw shame!! So you may be hearing from me again before too long … in the meantime i’m off to see if we can use our puppy dog eyes (being 77 – or 11 in human years – Harvey and I have had a wee while to practice this look!) to return once more to the wood-pile!! Until the next time … woof!