Well, poke me in the eye with a blunt stick if we’ve not just had one of the best first weeks of a fieldwork season out here in the Atlantic Frontier – and given that the weather has now turned and the wind and rain are battering the islands we’re even more grateful for our encounters last week! After a stupendous encounter with a pod of highly exuberant common dolphins (see previous blog), it was the turn of a few other species to make our hearts soar – including the bottlenose dolphin. The west coast of Scotland population of these chaps is less studied and less well known than their Moray Firth (or even Cardigan Bay) counterparts and any chance to see them at closer quarters (but not too close mind!) is an absolute delight. (It is important to note here that if you do come across dolphins when out on the water that you “must” keep your distance and let the dolphins approach you if they so desire, if they don’t, then leave them alone as they’re obviously busy engaging in other activities and interfering with them can cause them distress and land you in hot water with the authorities. We have a permit from the Scottish Government to allow us to spend limited time to photograph the animals as this is helping to build a picture of the population, their health and social structure.)We first spotted a foraging pod of them from our land-based site and as they were pretty close to shore, feeding off a reef, we were able to spot a few young animals in the mix. Always a good sighting! The following day the weather was being kind and we managed to get back out on the boat. As we exited the loch to head out into the Minch some of the friendly porpoises that we know to use the area came over to check us out and we took this as a good omen of things to come! Within minutes of us arriving in the waters where we’d seen the bottlenose dolphins the day before from land, we saw fins … and were exceedingly happy to note that we’d found the same pod, foraging once more on this obviously productive bit of reef. Keeping our distance we held back and allowed them to make the first move … which they very soon did. As anthropomorphic as this next bit may sound however, there really is no other explanation for it … two individuals made their way over to the boat, swimming around and under us and having a good look, they returned to the pod and within minutes, the whole pod (including the mothers and calves – of which there were two) were heading our way and coming in for a closer look – obviously the two who’d come over first had had some good things to say about us!! For the next 20 minutes or so they delighted us by surrounding the boat, leaping out the water and splashing all around. We decided to leave them to it and took our leave, only for them to decide to come with us, travelling alongside on both port and starboard, and bow-riding as we went! We carried on our course and soon they returned to their lunch … having built up more of an appetite. 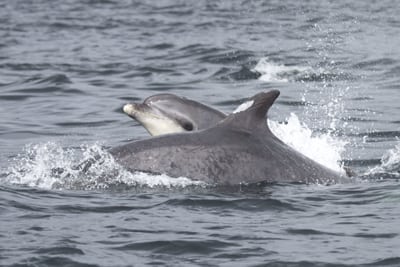 A cheeky wee calf having an eye-spy …! 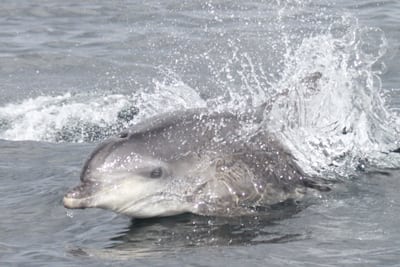 Powering through the water this bottlenose dolphin was keen to keep up with our boat! 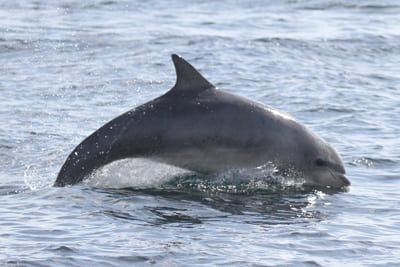 The following day it was back up to the land based site where again we were treated to a sighting of dolphins, this time a lot further out in the Minch. There was lots of splashing and leaping however this time they were too far for us to tell what species we were seeing, let alone if it was the same dolphins as the day before. We also had our first sighting this year of a basking shark and we were excited about the prospect of more sightings to come! And we didn’t have to wait long … the following day it was to be another day on the water for us (good to get them in when you can as the weather here is as changeable as a chameleon in full swing!) and we were hoping to see if we could find any more critters! Back up at the “Head” (Tiumpan Head) we quickly spotted a rather large basking shark, possibly the one we’d seen from land the day before, and set about taking photo-id pictures of its fin before undertaking a “de-sliming” to get a sample that we’d send off for DNA analysis. Colleagues at the University of Aberdeen are undertaking a study on the DNA of basking sharks around the UK as very little is known about these giants of the sea. Being able to know more about the inter-relatedness of these animals will be important for their future conservation – are the animals seen off the inner Hebrides related to the ones we see here off the Isle of Lewis? All very interesting questions and when basking sharks can offer up their DNA very easily (their bodies are covered in a film of slime and you only need a small amount – taken with a piece of cloth attached to a long pole – to get some useful information), and we can get close enough to them to do this, we are keen to help the study as much as we can! 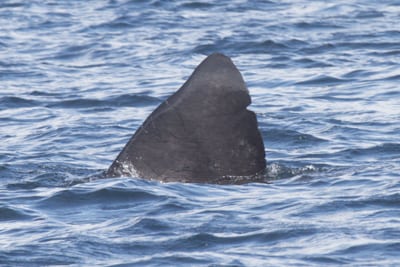 Easily recognisable dorsal fin of the first basking shark we “de-slimed” this season! 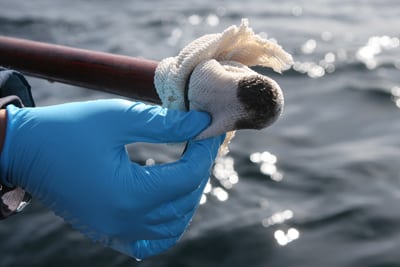 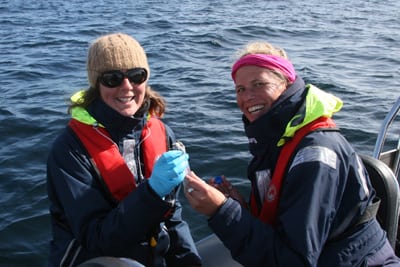 As if this wasn’t enough excitement for one day, on our return trip to harbour, we came across another pod of bottlenose dolphins. On closer investigation it became apparent (through markings on their dorsal fins) that these were some of the same animals that we’d been seeing on previous days! Once more they came over to check us out, playing in the wake of the boat and zig-zagging underneath us as we carried on our way. 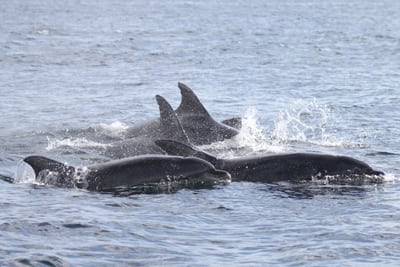 Dolphins on the move and keeping pace with the boat! 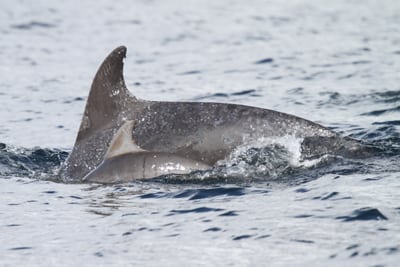 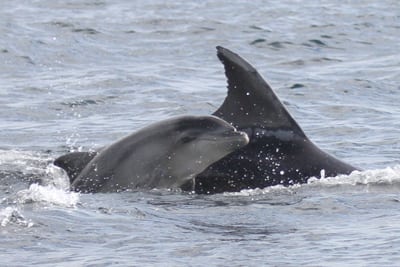 And another calf … this one a wee bit older but just as boisterous!

With the weather turning we managed one more day of land-based watching, although to be honest it looked rather messy out to sea with lots of white-caps and a swell in the making and we were thankful we weren’t out there being thrown about this way and that! Despite the less than great conditions, again we spotted a few basking sharks just hanging off the coast, slurping up the plankton and then our eyes were drawn to a mammoth amount of splashing off in the distance … more dolphins! Again, they were too far off for us to be able to determine species but there was much activity – lots of racing at the surface and splashing – and they spent the following 3 hours or so moving up and down the Minch … delighting not only us but several other people who’d come up to see what wildlife there was to see from this wonderful vantage point. But alas … our good fortune wasn’t to continue and the wind and rain that’s been prevalent throughout the UK found us … and started its battering of this chain of islands! So whilst we’re confined to indoors (excluding the mandatory dog walks which Kila will be only to happy to tell you about in the next blog) we can only hope that the dolphins are still there and will be encountered again as soon as the weather improves! We’re still waiting for the first few Risso’s of the season but i have a feeling it won’t be long … so stay tuned!