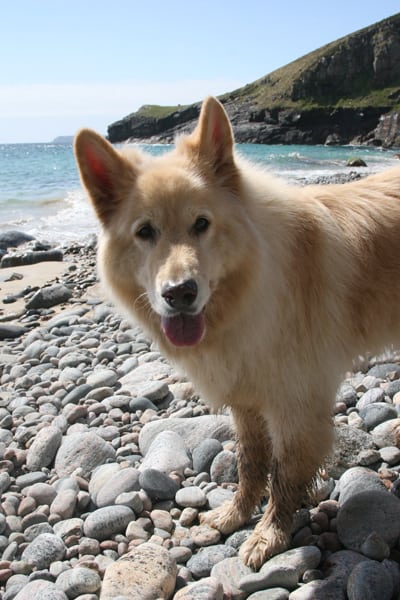 Harvey is my side-kick, otherwise known as the “Assistants assistant”. 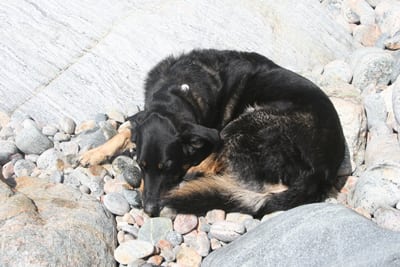 In our role as the “WDCS Canine Research Team” we’re used to helping out our lovely humans (otherwise known as Nicola and Sarah) with their research on the whales and dolphins that frequent the waters off the coast of the Isle of Lewis in the north-west of Scotland. To date we’ve busied ourselves with keeping them company on the cliff whilst they look out for fins (we look too of course but until someone invents some canine binoculars we can only keep our beady eyes on the inshore goings-on!), picking up rubbish on the beach (as some items can make good playthings in the absence of sticks) and sniffing out any marine creatures that have ended up on the beach … we’re actually very good at this and so far have found a Risso’s dolphin, a basking shark, the remains of a white-beaked dolphin, a blue shark, some jellyfish and of course several birds. 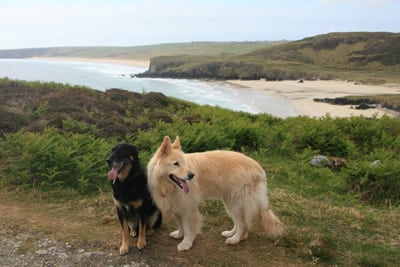 Some of the glorious beaches on the Isle of Lewis.

This year however we were given the opportunity to do something really exciting (if slightly scary) for our flippered friends, and Harvey and I signed up (well ok, our humans signed up for us as we’ve not quite got the hang of using a pen) to do a “Dolphin Dog Walk” which would see us embarking on a fairly major hike up the east coast of the island over endless miles of machair and peaty moorland. We’ve been training hard doing beach runs every day and we had planned on doing it last week but our humans advised us that the gale force winds made the conditions a wee bit too dangerous and they were a bit concerned for our safety so we postponed it by a day or two until the weather had calmed down slightly – this is after all one of the last frontiers into the North Atlantic and wind-less days are not all that common. Yesterday however it was declared to be perfect conditions, the humans packed their back-packs (making sure there were lots of tasty treats for us in there) and Harvey and I … well we just got out of bed, stretched and were off! The walk started at the “Bridge to Nowhere” – that was the scary bit … where then were we walking to? – but we were assured that it wouldn’t be an endless trek and that there was a destination in mind. With this information in paw, Harvey and I got the wind beneath our tails and set off with spirits high. It did of course help matters that the local rabbits came out to play and egged us on over the first hundred yards or so! 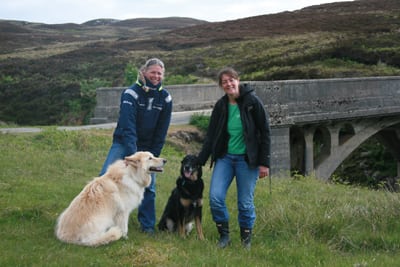 At the Bridge to Nowhere … ready for the off!

We’d actually tried to embark on this walk last year but after a mile or so we had to turn back as it was so soggy underpaw that it was like walking through treacle, and with a distinct lack of wind we were being eaten alive by midges! This time around however, as there has been literally no rainfall in the islands for months, we had been assured that it would be relatively dry underpaw. The light winds would ensure that the midges were absent and as the sun was shining it was nigh on perfect conditions for a good stomp! The humans had a map (always good to carry one of these if you ask me) and some nice person had obviously been out before us and planted lots of colourful sticks in the ground which we were told we were meant to follow and sadly not chase and chew. It has to be said however that trying to find green sticks on a green background did at times prove to be quite a challenge … see earlier comment about bringing a map! 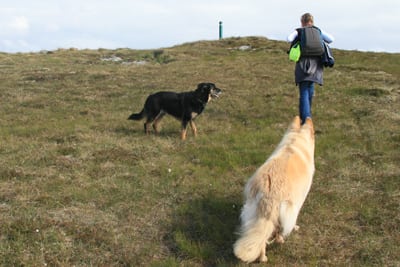 Only a mile or so in and one of humans (we’ll call her Nicola) was our first “bog casualty” … one minute she was there, the next she was almost half her size, only to reappear to her full height with a rather wet and dirty right leg … yip, she’d stepped right into a rather big bog and as you can imagine was none to happy about it … that’ll teach her to watch where she was going! The humans then sneakily devised a strategy that would see us going first – to test the ground – but Harvey and I were having none of that and made sure there was always a human out in the lead. 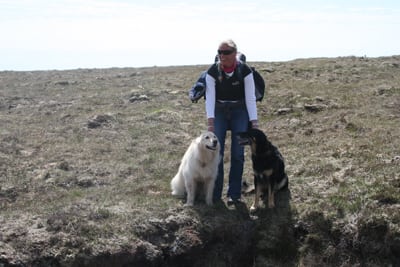 “Comforting our human Nicola after her “bog adventure” … not sure what happened to my ears though?!”

The first few hours were pretty tough going as we sidestepped hidden bog after hidden bog (they learn fast these humans) but the views out across the Minch made up for it. We had an outstanding window on the world below and we could see for miles in all directions – although to be honest it was just miles of machair in the direction we were headed! 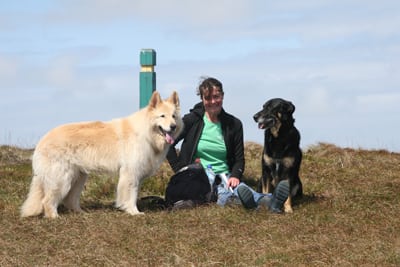 “We always made sure we had time for a wee sit down … and a snack!” 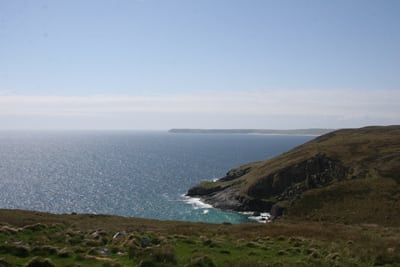 “Not too shabby a view eh?”

There were lots of wee lochs dotted around for us to cool off in and we made the most of the free swimming opportunities. Not content with just the lochs, Harvey soon became known as the “bog dog” and whenever and wherever there was a chance for him to get wet and dirty … he was there. 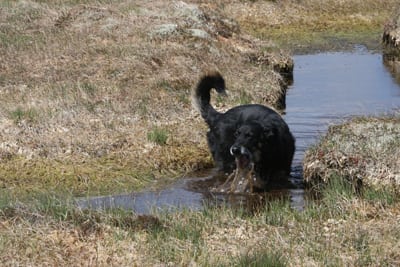 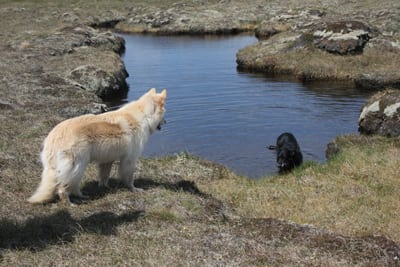 “You sure you’re not coming in?”

Approaching the half way mark we had to descend down the hill before climbing back up but the humans noticed that the gully led out down to the sea and we were soon veering slightly off track and heading for the bottom where a beach (albeit a very small beach – and even smaller given it was high tide) awaited! We didn’t get there without a fair bit of rock-climbing (i think they’ve mistaken us for goats here) but it was worth it to get to the bottom and have a cooling off dip in the sea. After a little bit more mountaineering and a return to the heather’ed landscape it was time to stop for lunch (and a tasty treat, or 2 for us … just to keep our energy levels up of course) and what a perfect spot our humans picked … more glorious views out to sea and some lovely soft grass for us to rest our weary paws on. 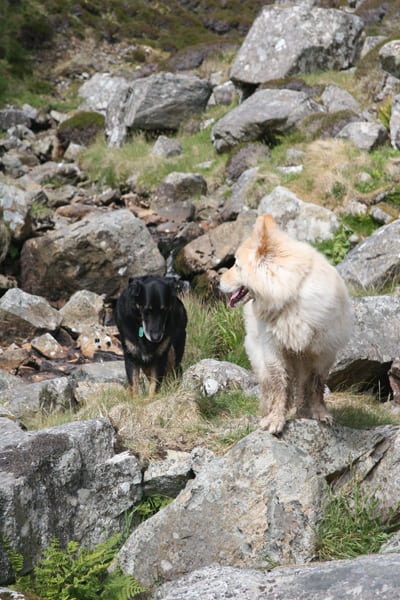 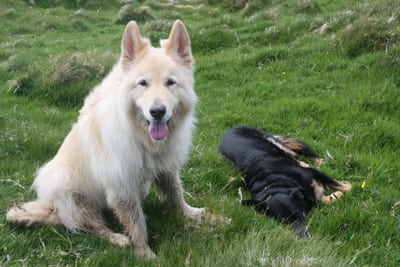 “I think Harvey might be a bit tired! What do you think?” 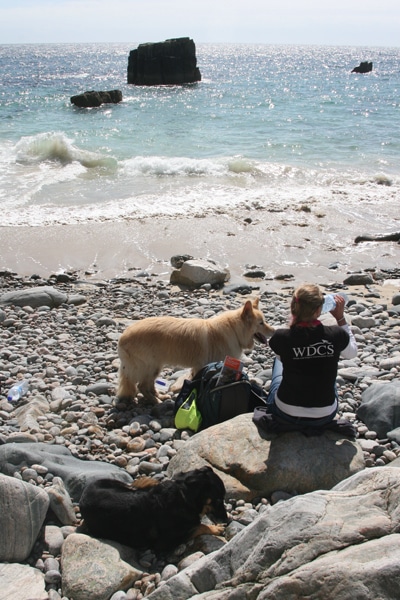 Not a bad spot to stop for a wee break!

But they don’t hang around long our humans and before we knew it we were off again. We tried to stick to the coast as much as we could but every now and then we had to come slightly inland as there were more gullies (this time with no chance of getting down to the bottom in one piece) and bogs to avoid. As far as wildlife spotting during our walk, there wasn’t much to write home about … we came across a few red grouse (both of which appeared very surprised to see us!), some fulmars and kittiwakes soaring over the cliff edges, and a few other wee brown birds … as noted before, an ornithologist i am not! We also kept an eagle eye on the waters below but it was a bit choppy to see much and we only registered a few unidentified splashes far off in the distance! 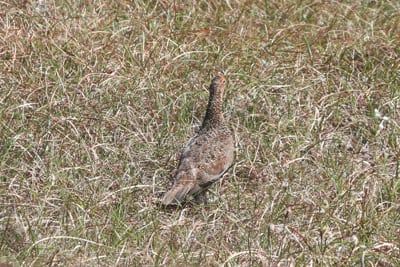 A red grouse … rather cleverly camouflaged don’t you think?!

Our “Dolphin Dog Walk” should technically have been called the “Dolphin Dog Bog Jump” as we (and the humans) spent the second half of the walk bog jumping – this of course caused much hilarity as the humans were not quite as adept at it as us 4 legged creatures and ended up lying on the ground quite a few times!! (I think they were actually just tired and using it as an excuse to have a wee rest!) 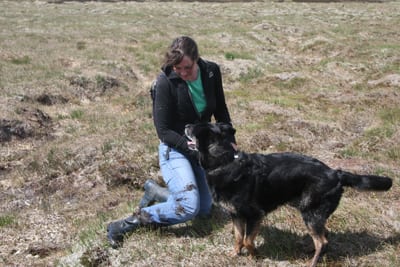 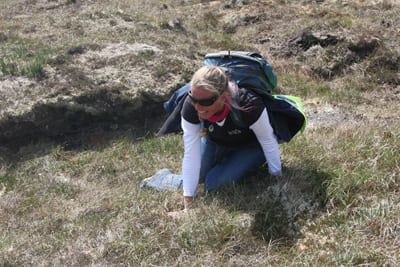 On and on we went, passing by more sticks in the ground that i wasn’t allowed to chase although i think another dog must have been because at one point there was a distinct lack of said sticks and the humans had to get out the map and double check our route! 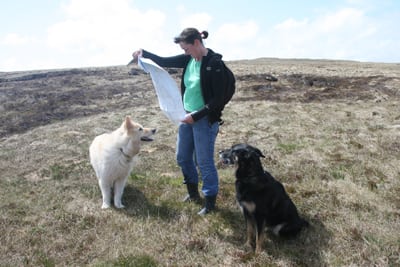 “Do you really know how to read that thing? We’re not lost are we?”

Soon however the end was in sight, which is a good thing because if truth be told we were starting to tire (we are after all both getting on in our dog years … !!) and we were very happy to spy the finish line ahead! It had been an eventful day and we’d covered a huge amount of distance and seen a whole part of the island of Lewis that we wouldn’t have been able to see had we not walked (and jumped) it! We were thrilled that we’d achieved our goal and that in the process we’d managed to raise vital funds for the really important work that our humans do over here … it really was a fantastic day! 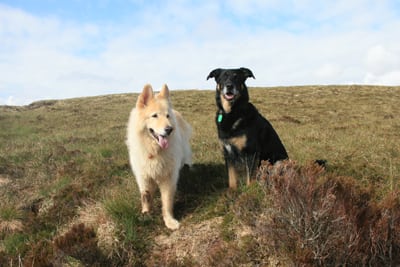 “We did it! Dog walk completed!”

Our blog wouldn’t be complete without a massive shout out to our support team – Kila (our WDCS ShoreWatch colleague with a wonderful name!) and Janet who very kindly ensured that we got to and from the start and end points of the walk – being that it wasn’t a circular walk some logistics were required!! And of course an even bigger THANK-YOU to everyone who sponsored us … we’re very grateful to you all and really appreciate the words of support that you’ve given us on our Just Giving page …!! It’s also not too late to sponsor us … least now you know we’ve done it – Just go to http://www.justgiving.com/dolphindogwalk And yes … we did get a paw massage on our return … and a huge dinner with sweeties as dessert!! So THANKS again everyone … until the next time!! Woof woof …. 🙂