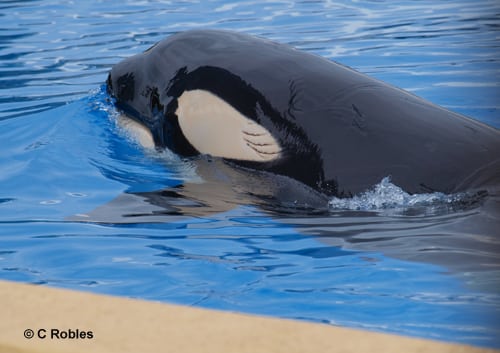 Shocking new images are coming out of Tenerife’s Loro Parque showing Morgan, the wild Norwegian orca ‘rescued’ from the Wadden Sea in 2010, getting repeatedly rammed and bitten by the other animals held there. Her body now has deep laceration wounds as other orcas in her tank show dominance over her.

Morgan spends a lot of her time in a shallow side pool with Adan, a hand-reared two year old, and away from the other animals – a sign that she has not been accepted by the other orcas. Adan’s mother, who was made pregnant at just seven years of age, is now expecting another calf later this year. This new addition to Loro Parque, if it survives, will bring the total number of orcas held to seven and concern remains as to what will happen to Morgan and Adan as ‘their’ small, medical pool will be needed for the new mother. In the wild, incidentally, a female’s first calf is usually born at around 13 years.

While the four original orcas (Kohana, Keto, Tekoa, Skyla) sent to Loro Parque in 2006 all belong to Sea World, questions still remain as to who ‘owns’ Adan and Morgan and this issue will be key if Loro Parque or Sea World ever try to relocate them.

In February Morgan debuted in her first circus-style show performing tricks for the paying public. So much for education, science and natural behaviour!

So, to Dutch State Secretary, Henk Bleker, Dutch Appeal Judge, M. de Rooij and other members of the Dutch judiciary who thought sending Morgan to live in a concrete tank with this highly unstable, dysfunctional group of orcas was her best option rather than be given a chance to return to the wild, SHAME ON YOU!